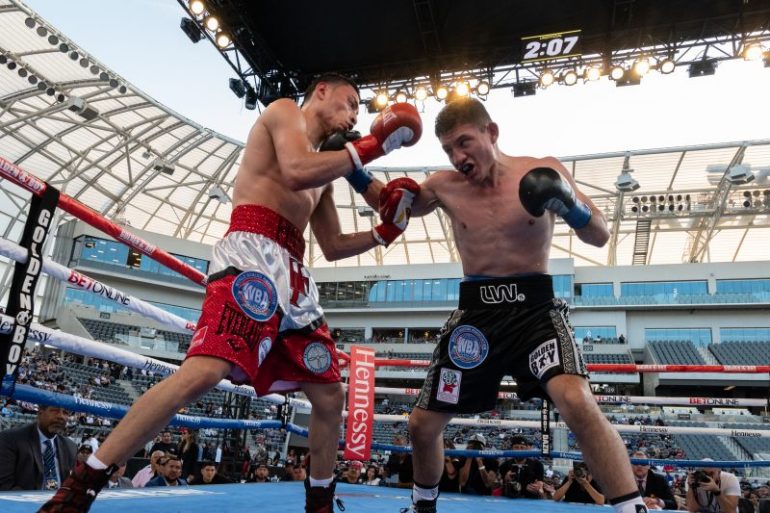 LOS ANGELES – William Zepeda dominated Hector Tanajara to a technical stoppage after the sixth round of their scheduled 10-round lightweight bout on the undercard of the Gilberto Ramirez-Sullivan Barrera card at Banc of California Stadium on Friday.

Zepeda (23-0, 21 KOs), an aggressive southpaw puncher from Mexico, utilized a fan-friendly blend of relentless pressure, two-fisted volume punching and a debilitating body attack to overwhelm Tanajara (19-1, 5 KOs), the better-known prospect from San Antonio who has been guided by respected trainer Robert Garcia and Golden Boy Promotions.

Zepeda applied his suffocating attack from the opening bell and never let up, refusing to allow the taller, rangier boxer the time to think or the space to operate. He quickly sapped the strength from Tanajara with his vicious body shots and uppercuts on the inside, but he couldn’t take the proud Texan’s will. Tanajara fired back whenever he could, whether he engaged on the inside (which wasn’t a good idea) or was on the move. Garcia, who trains the 24-year-old former amateur standout in Riverside, California, saw the grim writing on the wall and saved his fighter from unnecessary punishment (and a potentially spirit-crushing KO) by asking referee Raul Caiz Jr. to stop the bout after Round 6.

Naoko Fujioka (19-2-1, 7 KOs) retained the WBA flyweight title with a majority decision over Sulem Urbina. Fujioka, a 45-year-old veteran’s veteran from Tokyo who has held world titles in five weight classes, won by scores of 96-94, 95-95 and a 99-91 tally that many observers thought was absurd.

Azat Hovhannisyan (20-3, 16 KOS), The Ring’s No. 8-rated junior featherweight, pitched a shutout against tough Mexican journeyman Jose Santos Gonzalez (23-9-1, 13 KOs) in a stay busy bout. Hovhannisyan won by scores of 100-89 and 99-90 (twice) and appears to be in line to vie for one of the many WBA titles floating around at 122 pounds.