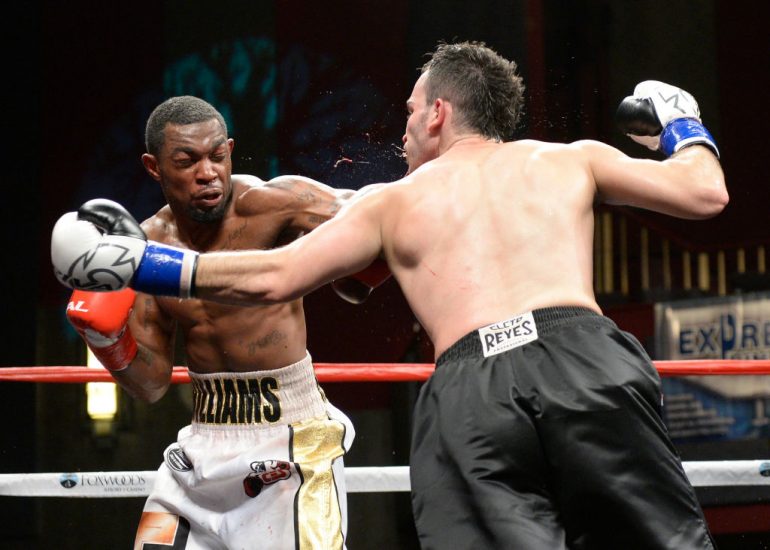 Last month, Jimmy “Quiet Storm” Williams scored what was perhaps the finest win of his career. In the main event of a show at Buckhead Fight Club in Atlanta, Williams (18-5-2, 6 knockouts) defeated former junior middleweight titleholder Yuri Foreman by majority decision. That upset victory has the Connecticut native hungry to get right back in the squared circle as soon as possible.

“It was an unbelievable experience,” Williams told The Ring. “I have a lot of family and friends down there in Atlanta. It felt like I was right at home, the southern hospitality was great.”

Foreman had been in the midst of a comeback after being out of the ring for nearly four years. Those plans were ruined when Williams crashed the party.

“I felt very confident going up against Foreman,” he said. “I was familiar with him. We had trained together before in Patterson, New Jersey. We sparred over 20 rounds. I envied him at the time because he had been the champ. Now, I have a win against him. It was absolutely one of the best wins of my career.”

Williams is 2-0 this year after a rough stretch in 2019-2020, when he lost four of five fights, including a KO 1 defeat to junior welterweight prospect Brandun Lee last October.

“I just wasn’t prepared for those fights,” he explained. “No excuses, but we were taking fights on late notice, we were fighting at unnatural weights. The Lee fight was at 144 pounds, I came into the ring with nothing left.”

After the Lee fight, Williams went all the way up to middleweight, where he dropped a unanimous decision in Mexico to a fighter with a losing record. On paper, he should have dominated the fight. At that point he was at a crossroads and did some soul searching. Williams realized that he had to make changes and make them fast.

“I was in danger of becoming a fighter that’s known as the opponent,” he told The Ring. “I was definitely heading in that direction. So, I made changes in camp. I’m with a new team now, training at Champs Gym in Waterbury, Connecticut.”

“I sought out the Yuri Foreman fight. This win proves I’m more than just the opponent.”

Williams started boxing at the age of eight but soon found his way into other sports. Born a gifted athlete, he excelled in football and track in high school. He ended up playing college football and, although undrafted, was invited to workout with several NFL teams. When football didn’t work out, it was back to boxing, where he has fought as a pro since 2013.

Today, at 34 years old, Williams has a new team, new gym and a new attitude. He also says there will be no more weight jumping or late-notice fights.

“I’m at my natural weight now,” he said. “I’ll only be fighting at 154 pounds from now on. When I was younger I could make welterweight, but the older I got, it took a lot of strength out of me. And I’ll be fully prepared for every fight we take, the same way I was for Foreman.”

“The junior middleweight division has some great names. I would love to share the ring with Tony Harrison, Julian Williams or Jarrett Hurd.”

Next Saturday, Jermell Charlo and Brian Castaño will fight in San Antonio, Texas to unify all of the junior middleweight titles. It’s a matchup that Williams has been paying close attention to.

“That’s such a good fight,” he said. “Both men are champions. Brian comes to fight, but I like Charlo. He’s more physical. I think he takes it with a late-round stoppage.”

“I’d like one or two fights and then I’d love a crack at Charlo. But if the opportunity presented itself now, I’d absolutely take it. In the meantime I plan to return to the ring in late August or September. My promoter Jimmy Burchfield (president of CES Boxing) is putting something together. I’m looking to headline something in Connecticut. Things are opening back up here (from Covid) and fans will be able to attend.”

“I would like to thank everybody that supports me. Keep a look out for me, because this is the most important part of my career. I’m just now hitting my prime. Big fights are on the horizon. I’m going to be world champion.”