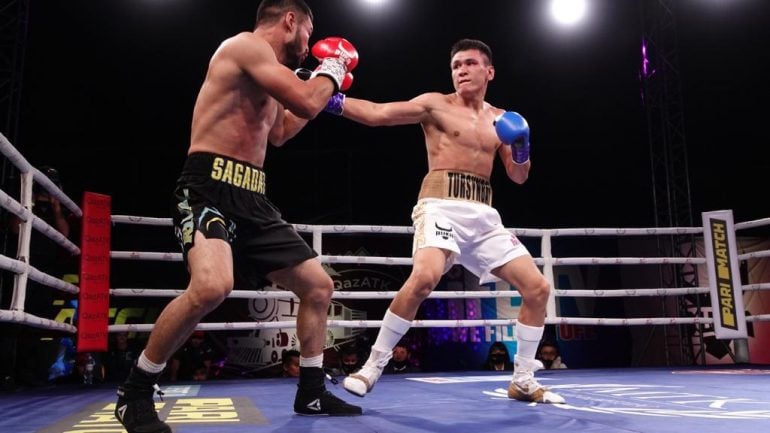 Best night of pro career and why: Kulakhmet scored a highlight reel first round knockout of previously unbeaten Heber Rondon (20-0, 13 KOs) on the undercard of Jamel Herring-Carl Frampton in April 2021.

“My best performance was my last fight in Dubai,” Kulakhmet told The Ring through his manager Askar Salikbayev. “We were ready for a 10-round fight. It was a little bit risky because we didn’t find any video for this guy.

“I hadn’t scored a knockout like this in my other two fights. This was an impressive KO.”

Worst night of pro career and why: The 27-year-old felt for a number of reasons he wasn’t at his best when he faced Macauley McGowan last November.

“My second fight, where I didn’t stop the opponent, it went all 10-rounds,” he said. “Weight cutting and other stuff, I wasn’t happy. If I was with [Trainer] Jamie [Moore], I would have knocked him out 100 percent.”

What’s Next: Kulakhmet will face journeyman Aleksei Evchenko, who stepped in to replace original opponent Stanyslav Skorokhod, in the main event in Almaty, Kazakhstan, on Saturday.

It would be a surprise if Kulakhmet didn’t beat Evchenko (19-14-2, 8 KOs) but can he stop the veteran has only been stopped once in 35 fights?

Why he’s a prospect: Kulakhmet has a vast amateur pedigree, he won four national titles, gold at the Asian games and bronze at the World Championships in 2019.

“I beat Israil Madrimov at the Asian games in Bangkok,” he said. “We met five times, I won three times and he won twice. When I beat Madrimov, I became Asian champion and it was an exciting fight.”

The fearsome southpaw fought around the world during his amateur career and as well as the rivalry with Madrimov, also boasts wins over the likes of 2017 World Championship gold medal winner, Oleksandr Khyzhniak, rising middleweight prospect Zhanibek Alimkhanuly and amateur stalwart Zoltan Harcsa

Alex Steedman, who has commentated on all three of his fights, feels Kulakhmet is improving all the time.

“Like most Kazakh southpaws he’s technically sound but there’s a rough, aggression to him which I like,” said Steedman. “He needs to learn when and how that should be applied so linking up with Jamie Moore should help.

“It worked for him on his debut but I thought undermined what could’ve been a sensational performance against McGowan. He looks strong at 154-pounds and is one to watch given the right developments.”

Why he’s a suspect: Kulakhmet has the fundamentals to carry him a long way as a professional. However, there are always things to learn and becoming more in tune with the professional side of the sport will clearly help him.

Steedman feels there is nothing that Kulakhmet can’t develop as he goes along with the appropriate tutoring.

“Use of space and distance, when to press, when to counter,” said Steedman. “He can learn to control that himself and should do with experience.”

Storylines: Kulakhmet was born and grew up in the south-central city of Kyzylorda.

“I come from a simple family,” he said. “My father is a teacher at school and my mom takes care of us. I have four older sisters and I am the only boy.”

His father first brought Kulakhmet to boxing when he was 8-years-old.

The Kazakh doesn’t model his style on any particular boxing.

“I can’t say I like this boxer,” he explained. “I don’t want to look like anyone but I look for what I need from each boxer.”

He’s in no mood to take it time either: “I want to hurry up and become a world champion.”

Kulakhmet is a family man; he’s married and has four children.

“Apart from boxing, I am always with my family,” he said. “I like spending time with my children. I spend a lot of time with them after fights.”