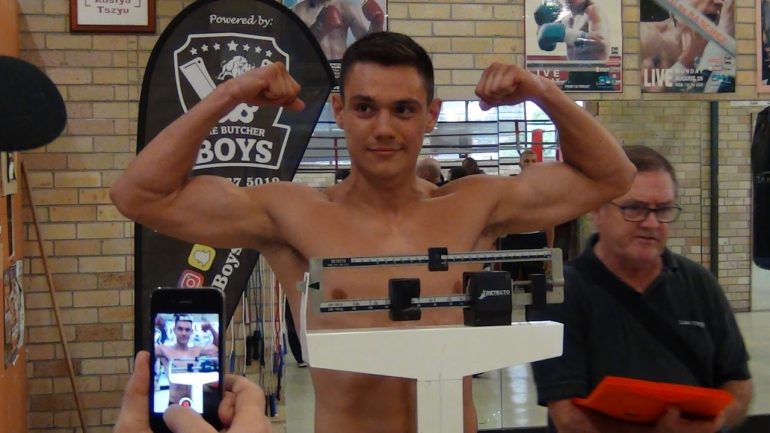 Australian junior middleweight star Tim Tszyu was good to go when bitter rival Michael Zerafa pulled out of their all Australian showdown, forcing Tszyu’s team to quickly secure Steve Spark as a replacement for a scheduled 10-round contest at the Newcastle Entertainment Centre in Newcastle, New South Wales on Wednesday.

Tszyu, who is rated No. 7 by The Ring at 154 pounds, was left stunned by the whole situation.

“I couldn’t believe it at first, I thought it was untrue when they said they’d pulled out because of the Covid restrictions,” Tszyu (18-0, 14 knockouts) told The Ring. “There is no Covid here in Newcastle, they don’t have to quarantine, it’s a safe zone. I don’t know what they were on about. It just seems like Zerafa’s team are having a few issues.”

The 26-year-old isn’t unduly concerned about the late switch in opponent. 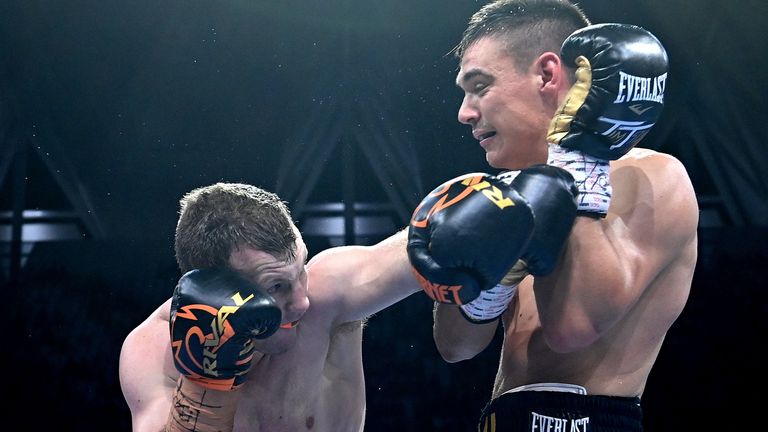 Tszyu (right) mixes it up with Jeff Horn. Photo courtesy of Sky Sports

Understandably Tszyu is disappointed with how everything has played out, but he’s grateful that his team had a plan B.

“The show must go on,” he said. “The fact [Zerafa] pulled out a week before with some lame excuse is quite disrespectful. It’s not boxer’s code, but all props to my promoter and manager; they found a late replacement in an hour-and-a-half.

“I’m focused for the next job. I know what lies ahead and the consequences of underestimating [Spark]. A lot of times boxers underestimate their opponent, especially at one week’s notice. He’s here, he’s ready to go and if he’s ready to come in at a week’s notice, he’s going to make the most of it. I’ve got to be 100-percent ready.”

Tszyu admits his training camp has been disjointed because he moved operations to Newcastle two weeks ahead of fight time due to the Covid lockdown in Sydney. However, the talented boxer-puncher believes that he has improved immeasurably over the past 12 months.

“It’s all about consistency and hard work,” said Tszyu, whose popularity at home led to 6,000 ticket sales in a single day. “During this pandemic, people have stopped [fighting] and they go on the shelf, but I’ve been working hard and having those fights. I feel bigger, stronger, quicker; my boxing I.Q. is getting better, my defense is getting better, I’m seeing shots, I’m learning the game. I get the consistency and that’s the number one key in the sport of boxing.

“I was lucky I had different opponents who had fought worldwide and been tested by the very best. [Dennis] Hogan was tested by [Jermall] Charlo (L TKO 7), [Jeff] Horn was tested by [Manny] Pacquiao (UD 12) and [Terence] Crawford (L TKO 9).”

“These boys have been tested by international opponents. I’m getting rid of these opponents better than the other boys, so it shows the level I’m at.”

Tszyu, who is the WBO mandatory challenger, will have one eye on the July 17 Jermell Charlo-Brian Castano fight, which will see the winner crowned the undisputed junior middleweight champion. However, he is eager to test his skills against any of the top fighters in the division.

“I’ll fight anyone, it really doesn’t bother me at all,” stated Tszyu. “There’s no one in particular, anyone in the top 10.

“There’s plenty of names out there, we’ve just got to think about if they’re going to come here or if I’m going to go there. We have to consider those options and we’ll figure it out after the fight. It definitely has to be someone in the international region.”

Spark (12-1, 11 KOs) turned professional in 2014. He lost his second fight to Baishanbo Nasiyiwula (MD 4) in China but has rebounded to win the Australian junior welterweight title and a collection of regional belts. The 24-year-old is coming off a career-best win over Jack Brubaker (UD 8) at welterweight and had been in training to fight in late July before agreeing terms to face Tszyu.