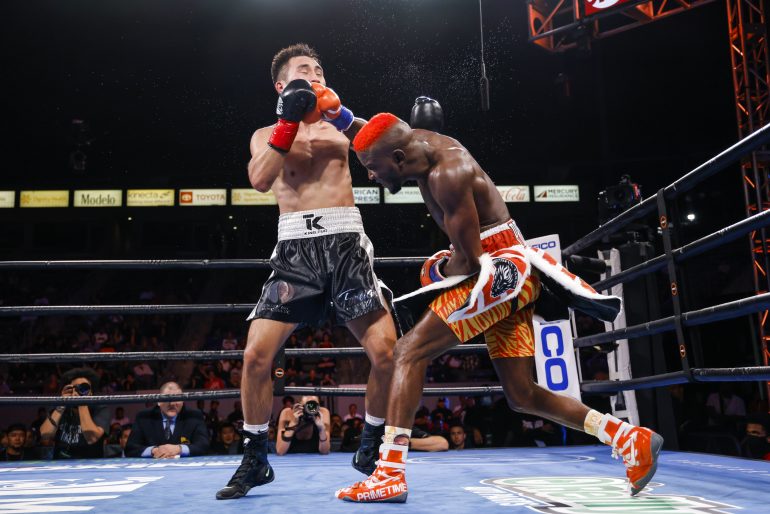 Nyambayar not only accepted the fight on two weeks’ notice, he moved up in weight as well, competing at 130 pounds for the first time. After the fight, Colbert was complimentary of his opponent.

“He did a hell of a job,” Colbert said in the post-fight interview. “He brought his best. I take of my hat to him and wish him nothing but the best in his career. For a natural 126-pounder, he carries power.”

Colbert’s hand speed advantage was apparent right away. The Brooklyn native consistently pumped out a straight, stiff jab from the opening bell. Nyambayar (12-2, 9 KOs) hung tough and held his ground, attempting to time Colbert. “King Tug” went to the body in the early rounds and that opened up some opportunities upstairs.

The Los Angeles-based Mongolian was able to land some good right hands on occasion. Colbert, the naturally larger fighter, took the punches well. Whenever Nyambayar did land, Colbert immediately responded and went back to the jab. “Prime Time”, who wore orange gloves to match his dyed orange hair, had bloodied Nyambayar’s nose by the middle rounds. His steady work rate, led by the jab, had all but nullified King Tug’s attack.

Nyambayar, who took this fight when original opponent Yuriorkis Gamboa suffered a rib injury, never stopped trying but simply had no answers. “Prime Time” coasted in the championship rounds and the judge’s scorecards were just a formality as the closing bell rang.

Punch numbers reveal just how one-sided the fight was.

After the fight, Colbert called out Gervonta Davis, the current WBA junior lightweight champion. “I’m ranked number one in the WBA,” he said. “Al Haymon, you know what to do. It’s my time. It’s Prime Time on Showtime baby.”

Although Davis currently holds the legitimate WBA title at 130-pounds, he just fought at week ago at 140 and is unlikely to move all the way down to 130 in the future. So don’t get your hopes up for a Davis vs Colbert fight any time soon.

The co-main featured two young lightweights. Michel Rivera survived a sixth-round knockdown to come back and stop Jon Fernandez two rounds later. Rivera, a native of the Dominican Republic who now calls Miami home, improved to 21-0 (14 KOs) with the win. He dropped the Spaniard with a hard one-two in the center of the ring with less than a minute remaining in the eighth. Fernandez dropped to 21-2 (18 KOs) with the loss.

All three judges had it scored 67-65 for Rivera at the time of the stoppage. Those scores were debatable, however, as Fernandez did some good work. CompuBox credited Rivera with landing 87 of 337 total punches (26%), compared to 76 of 330 (23%) for Fernandez.

Showtime opened the broadcast with a replay of Gervonta Davis’ eleventh round technical knockout win over Mario Barrios last Saturday. Their junior welterweight bout headlined a PPV card from Atlanta.

In a battle of undefeated junior lightweight prospects, Angel Alejandro improved to 10-0 (4 KOs) with a unanimous decision win over Rudy Ochoa, who suffered his first pro loss to drop to 10-1 (5 KOs).

Anthony Cuba improved to 2-0-1 (1 KO) with a majority decision win over William Flenoy in a four-round lightweight bout.

Gabriela Fundora improved to 2-0 with a unanimous decision win over Indeya Smith in a four-round, female flyweight bout.