A 130-pound opportunity is knocking at Tugstsogt Nyambayar’s door 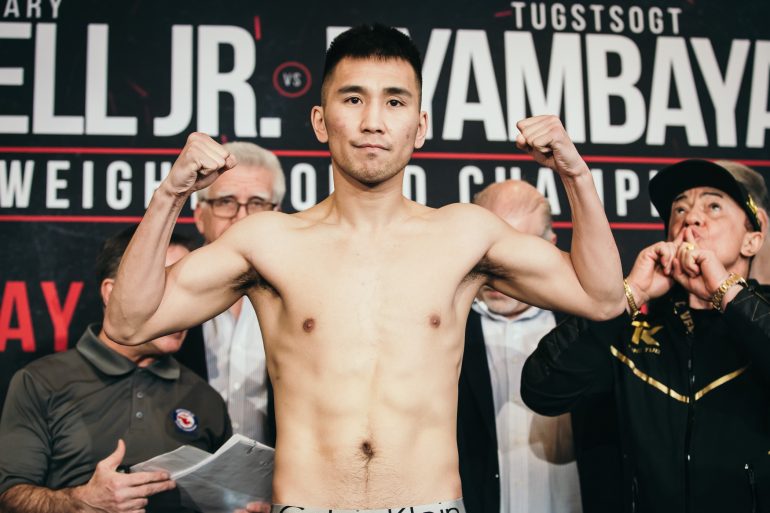 When opportunity knocked for Tugstsogt Nyambayar, he was more than glad to open the door.

Not many fighters, especially those whom fought for a major title, would be willing to take a fight on less than two weeks’ notice but Nyambayar is confident he can defeat one of boxing’s top young guns.

The 29-year-old Nyambayar took the fight against Colbert last week after original opponent Yuriorkis Gamboa pulled out due to injury. After consulting with his team, Nyambayar decided to move up in weight after challenging WBC featherweight titleholder Gary Russell Jr. on February 8 of last year, losing by unanimous decision.

In his most recent bout on September 19, Nyambayar (12-1, 9 knockouts), who is originally from Ulaanbaatar, Mongolia, and now lives and trains in Los Angeles, California, defeated previously-unbeaten Cobia Breedy by split decision.

Despite taking a fight on such short notice and moving up in weight, Nyambayar is confident he can pull off the upset victory over Colbert (15-0, 6 KOs).

“I was training for a fight that was scheduled for July 31,” Nyambayar, through an interpreter, told The Ring over the phone, Tuesday afternoon. “I’ve been in the gym for the last several weeks. I spoke to my team and felt that this was a greater opportunity, so I decided to take the fight.

“I don’t know too much about [Colbert]. I know we fought on a few of the same cards in Brooklyn. I know he is unbeaten but I’m confident I can win the fight and set up greater opportunities in the future.”

Nyambayar gave a good account of himself in the loss to Russell but was not at 100 percent for the fight. He expects to make key adjustments during the Colbert fight, something he didn’t do against Russell.

“I thought it was an awful performance on my part on that night against Gary Russell,” said Nyambayar, who has fought under the Premier Boxing Champions (PBC) banner since making his pro debut in March 2015. “I watched the fight and I did not like my performance. I fought one-dimensional. Not only that but we had been waiting to fight Russell for so long. We were his mandatory and he only fights once a year and I think it would’ve been wise to take a fight before facing Russell.

Prior to facing Russell, Nyambayar had not fought in over a year since defeating Claudio Marrero by unanimous decision in January of 2019.

Despite being the underdog, Nyambayar is confident of a victory. Even with potential fights on the same, if not bigger, platforms, Nyambayar believes he has unfinished business at 126 pounds.

“This fight against Colbert is a one-time thing at 130 pounds,” said Nyambayar. “I’m moving back down to fight as a featherweight after this fight. I believe I can win a world title belt at 126 pounds. There are still opportunities there at that weight.

“I would then move up in weight to 130 pounds in a few years and compete against the best in the division. I already told [advisor] Al Haymon what I would like to do.”

As for Saturday night, Nyambayar hopes Colbert is not overlooking him.

“I don’t mind mixing it up. I will prove to him I’m not a fighter that can only fight one way.”