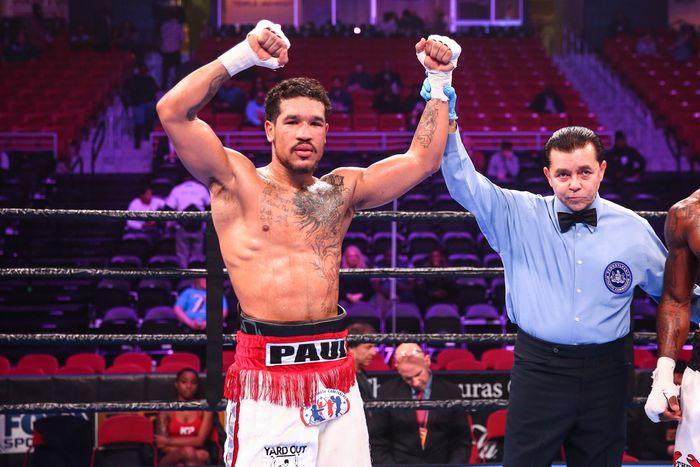 Paul Kroll is set to take on his stiffest test to date.

The Ring learned on Sunday evening that the North Philly welterweight prospect will return to the ring on July 31 against seasoned veteran Justin DeLoach in a 10-round, FS1 televised bout from Prudential Center in Newark, New Jersey.

The card will be headlined by rising heavyweight prospect Michael Coffie as he takes on battle-tested Gerald Washington in a 10-rounder. The main event will be televised on FOX.

“The Punisher” Kroll (8-0, 6 KOs) will fight for the first time since October 2020, when he outpointed Lucas Santamaria over 10 rounds in Los Angeles. However, a majority of ringside observers felt that he did not deserve to win the fight.

“I think it was a draw in my estimation,” said Ray Flores, who was behind the mic that evening.

The bout was Kroll’s first following the COVID-19 shutdown, albeit he was able to land a fight just prior. In January 2020, he scored a fourth-round stoppage of Marcel Rivers at Liacouras Center in Philadelphia.

But perhaps a scare was a good thing for Kroll. After kicking off his professional career with six knockouts in seven fights, he was forced to answer questions about his ability to adjust when hit.

“I got to show more than just what people think about me,” Kroll, the 2016 Olympic Trials winner, said following his win over Santamaria. “I got to show that I’m in shape, and I can go 10 rounds. I showed them I can box; I can fight from the bottom.”

But credit to Kroll for facing the 6-foot-1 DeLoach (19-5, 10 KOs), who is no easy out. The 27-year-old has been in there with the likes of former unified junior middleweight titleholder Jeison Rosario, Nathaniel Gallimore, Terrell Williams, and Eimantas Stanionis. And while he has lost a majority of those bigger fights, he has 24 fights under his belt.

After what we saw in El Paso between Gabriel Rosado and Bektemir Melikuziev, experience can make a huge difference.