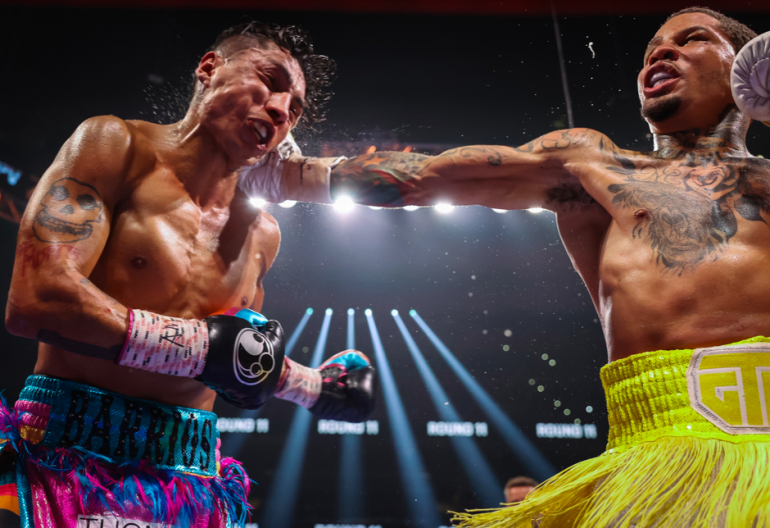 Davis swung for the fences with almost every shot he launched at Barrios. Photo by Amanda Wescott-SHOWTIME
26
Jun
by Michael Montero

Gervonta Davis had to work for it, but he dropped Mario Barrios three times before stopping him in the eleventh round of their junior welterweight fight Saturday night in Atlanta. Barrios appeared to be well ahead halfway through the Showtime PPV headliner, but “Tank” turned it on in the second half at State Farm Arena.

“I made it tough on myself,” Davis said after the fight. “I could have made it easier. I’m the type of fighter that wants to catch you with clean shots. The shots that I was throwing, most of them were missing, but eventually I caught up with him. When I caught him, it showed. Floyd Mayweather came to my corner and told me I was down. I knew I was down. He told me, “Show me that you’re great.”

“Congrats to Tank, he came in here and did his thing,” said Barrios after the conclusion. “It was an exciting fight and that’s what we both predicted. He’s explosive, he caught me slipping.” 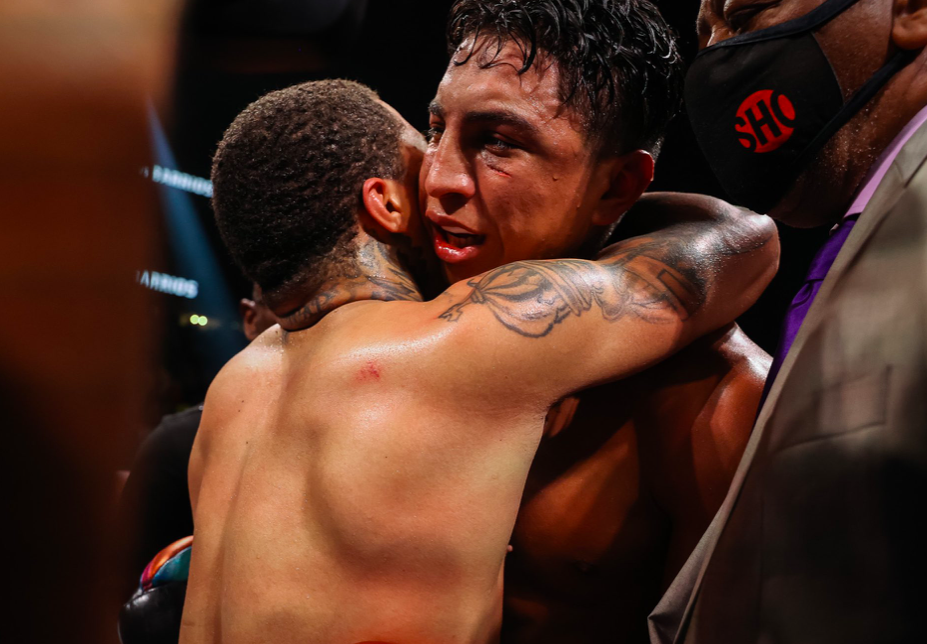 The fight began at a very slow pace with neither man throwing much. Barrios, The Ring’s No. 7-rated junior welterweight, seemed to control most of the first four rounds with his jab, utilizing his height and reach advantage to keep Davis (25-0, 24 knockouts) at bay. He certainly wasn’t dominating, but Barrios appeared to be doing just enough work to take those early rounds. Davis, a southpaw, was slowly cutting down the distance, though.

Things finally heated up a little in the fifth, with Davis landing several straight lefts. A trickle of blood appeared from Barrios’ nose in the sixth, as both men continued having success. The sold-out crowd “oohed” and “aahed” anytime Davis threw a punch. Nonetheless, Barrios appeared to be ahead on my unofficial card. But a minute into the eighth round, Barrios (26-1, 17 KOs) fell asleep for a split second and Tank made him pay. The San Antonio, Texas native bit on a feint, dropped his left hand and “Tank” caught him with a right hook to the temple, dropping him. Barrios made it to his feet, but moments later he was down again. The crowd thought it over, but once again Barrios made it to his feet. Davis went in for the kill, but “El Azteca” stood his ground and finished the round on his feet.

Barrios had a good ninth round, pushing Davis back with several hard punches that clearly got his attention. Suddenly, it felt as if the momentum might shift. The crowd cooled down. After the round, promoter Floyd Mayweather told Davis in his corner, “You’re down on the unofficial scorecards. I gotta be honest with you, that’s my job.” 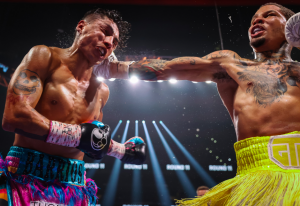 Davis swung for the fences with almost every shot he launched at Barrios. Photo by Amanda Wescott-SHOWTIME

The warnings seem to work, as Davis came out swinging in the championship rounds, clearly going for the knockout. In the eleventh, an explosive left uppercut to the solar plexus dropped Barrios.

He made it to his feet, but a follow-up attack from Davis hurt him again, prompting referee Thomas Taylor to stop the fight at 2:13 of the round.

CompuBox statistics reveal how competitive the fight was. Davis was credited with landing 96 of 296 total punches (32%), while Barrios connected on 93 of 394 (24%). Both men landed 17 body punches. At the time of the stoppage, the official judges had the fight scored 97-91 and 96-92 twice for Davis. Those cards felt a bit wide in the eyes of many ringside media and fans. But in the end, Davis made the judges irrelevant.

Barrios deserves credit for fighting well in spots and standing his ground. He suffered his first official loss as a pro tonight, but undoubtedly won over many fans in the process.

As for Davis, the business plan at Mayweather Promotions is simple. They will continue to go for the lowest risk with the highest possible reward. That means we won’t hear names like Teofimo Lopez, Josh Taylor, Regis Prograis and the like mentioned by anyone on Tank’s team. So regardless if Davis goes back down in weight or stays at 140-pounds, fans can expect more carefully crafted matchmaking in the near future. The Baltimore native has now won two secondary titles since moving up from junior lightweight, but is yet to face an elite opponent at 135 or 140.