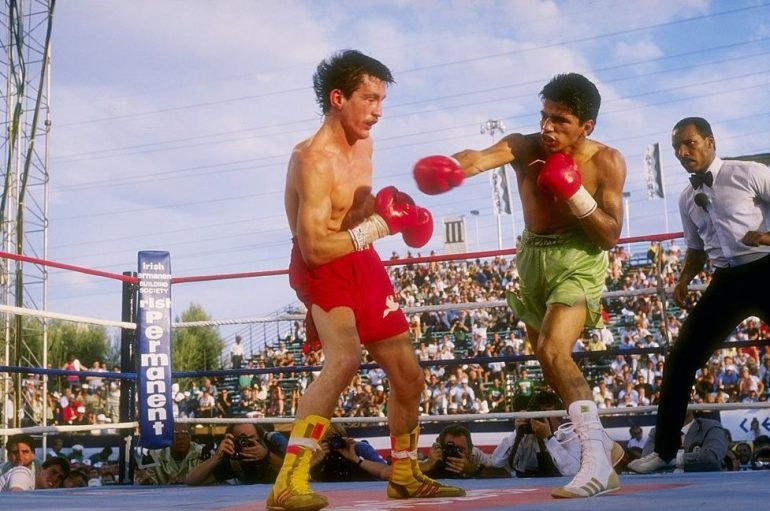 Estevan Cruz Jr. was born in Fort Worth, Texas, the oldest of four children, on November 2, 1963.

“I grew up good, my parents both worked,” Cruz told The Ring. “My father supported us well, he was a maintenance man for new homes. My mom worked at the post office as a postal clerk. My father disciplined me; I wouldn’t act up.”

His father introduced him to boxing at a young age.

The low-key Texan estimates he had somewhere between 400 and 500 amateur fights. During a very productive amateur career Cruz won gold at the 1979 National Junior Olympics at flyweight and 1981 Golden Gloves champion at 119-pounds.

However, he was unable to make the U.S. team that ultimately boycotted the 1980 Olympics, losing to Harold Petty at the quarter-final stage of the trials. 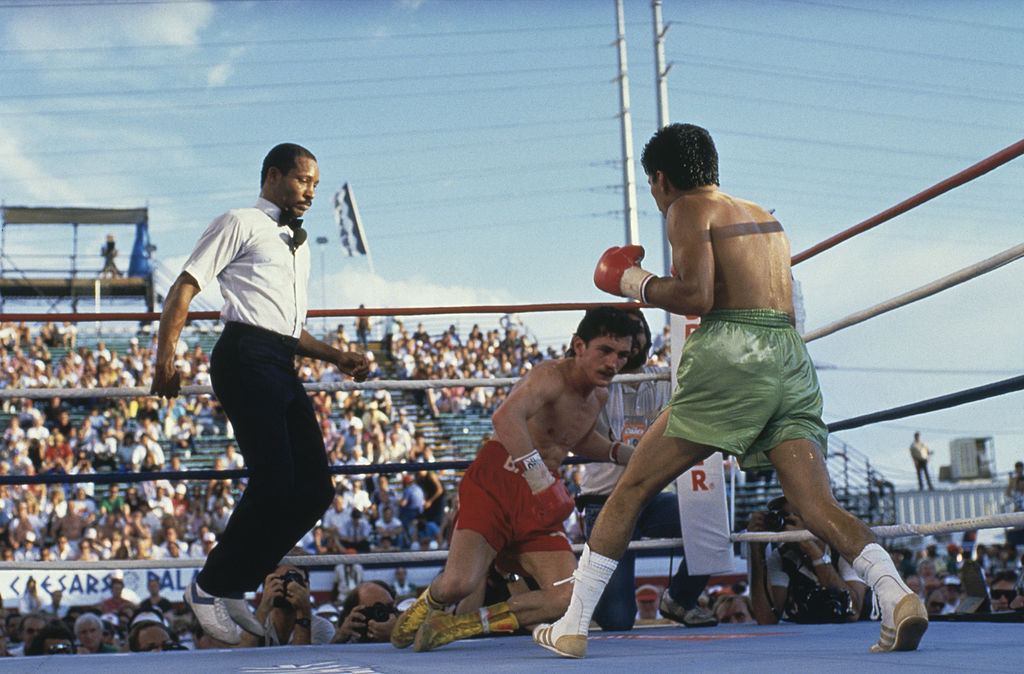 Referee Richard Steele looks on as Irish boxer Barry McGuigan (centre) falls during his defence of his WBA world featherweight title against Steve Cruz of the USA, at Caesars Palace, Las Vegas, 23rd June 1986. McGuigan led during the first half of the match, only to suffer severe dehydration, which contributed to a unanimous points decision against him after 15 rounds. Photo by Mike Powell/Getty Images

Cruz turned professional while still in high-school in October 1981. He stayed active largely fighting in his homestead while graduating from Trimble Technical high-school the following year.

His early career was mapped out by local businessman Tom Martin before he joined forces with manager/ trainer Dave Gorman, who operated a highly successful local gym with Donald and Bruce Curry, Gene Hatcher and Troy Dorsey, who all went on to garner world honors. Cruz was promoted by renowned Texan, Lester Bedford.

“Lenny Valdez stopped me; he was strong,” admitted Cruz, who lost his unbeaten record in startling fashion in the opening round. “At the time I fought a real lackluster fight and paid the price for it.

“I took him for granted, I shouldn’t have. I really didn’t think he was that good. I didn’t realize he hit so hard, to me he was slow.”

Cruz rebounded with six wins and when Fernando Sosa was forced to pulled out of a WBA featherweight title fight against Barry McGuigan, Cruz, who was ranked No. 9 by the sanctioning body, stepped in.

The two met outdoors at Caesars Palace, Las Vegas, on June 23, 1986. At the time of the opening bell the ringside temperature was a sweltering 110 degrees, under the ringside canopy, there were 72 television lights emitting extra heat, all of which played a part in the later stages of the action-packed encounter.

McGuigan, a pre-fight 5/1 betting favorite, got off to a good start, showing his caliber but to Cruz credit, he pegged McGuigan back and put himself in a position to win the fight against the flagging Irishman in the championship rounds.

“My corner was telling me I needed that [last] round so I had to finish strong,” recalled Cruz. “I gave it everything I had towards the end of that fight.

“I had him down, I almost stopped him but not quite. I knocked him down twice in the last round. I barely won that fight.”

“It was the best feeling in the world,” he said proudly. “To this day, I still think about it. If I wouldn’t have won that fight, I probably wouldn’t have been able to sleep that night. That was my goal and I reached my goal when I beat Barry McGuigan.”

The fight later was awarded The Ring “Fight of The Year” for 1986.

“Super Kid” returned home to Fort Worth to a hero’s welcome and rode in a parade.

After a tougher than expect non-title win over Roger Arevalo (SD 10), Cruz faced dangerous mandatory challenger Antonio Esparragoza at the Will Rodgers Coliseum, Fort Worth in March 1987. It wasn’t the homecoming he or his fans were hoping for.

“It was [disappointing], it was a tough fight,” acknowledged a crestfallen Cruz, who was stopped in the 12th round.

“After the Barry McGuigan fight things for me seemed like they were never the same again. Every fight I had after that was hard. I struggled in every fight after that. Maybe I was damaged from the title fight.”

Cruz returned five-months later and got back in the win column before dropping a decision to Jeff Franklin (UD 10). He won five consecutive fights which culminated in dropping and edging past future two-weight titleholder Tracy Patterson (SD 10).

His reward was a shot at IBF featherweight titlist Jorge Paez in El Paso, Texas, in August 1989.

“I hit him with a right hand [in the second round] and knocked him down, I didn’t think he was going to get up but he did,” said Cruz, who lost a competitive 12-round unanimous decision. “I was always cautious because like Barry, I thought he could always explode at any minute and I may the price for it.”

Cruz lost to future five-time featherweight titlist Manuel Medina (UD 10) and future IBF lightweight beltholder Rafael Ruelas (TKO 3). He was stopped in a WBC 126-pound title tilt against Paul Hodkinson (TKO 3). His name earned him a trip to Japan where he was knocked out by Yuji Watanabe (KO 2).

He bowed out after two low-level wins in his hometown in December 1993.

Cruz, now 57, is married, he has three children and two grandchildren. He still lives in Fort Worth. He initially stayed involved in boxing helping out at a local amateur club but stepped away after his friend passed away but expressed interest in returning. He currently works a day job as a Produce Clerk at Walmart and has worked for them for in the region of 10-years.

Antonio Esparragoza: He was taller than I was and had a longer reach. I had to bob and weave a lot to get inside to land some hard punches. He had a hard jab; he had a hard right hand too. He could hit hard with both hands. My face was pretty swollen up, my corner couldn’t handle the swelling. The jab started it off,  he set me up with a good long jab and connecting with that right hand and the accumulation of other punches afterwards.

Barry McGuigan: It was hard to land a good solid shot on him most of the time. In order to land some good shots on him I had to wear him down. We were fighting in the heat, it was like 110 degrees, for that fight. Eventually he started to wear down and once he started to wear down, I was able to connect on him. He had a good defense.

Jorge Paez: Paez was fast; he had fast hands. He had all-around good movement and was hard to hit.

Dana Roston: He had pretty good footwork. He was a showboat. He moved around a lot and was hard to hit.

McGuigan: Barry would take punches and just when you thought you had him, he’d come back and open up. Throughout that whole fight he was dangerous, I never took him for granted. I was always on edge because I always thought he might open up any minute.

Esparragoza: Lenny Valdez was strong, he was rugged. Manuel Medina was strong. Hodkinson kept coming and I couldn’t stop him. Esparragoza physically wore me down. I think he was stronger than Hodkinson. He was a taller, bigger fighter, he had a bigger frame than Paul Hodkinson.

Esparragoza: I remember I was starting to see swelling on him but very little. I was hitting him with everything I had and it didn’t faze him.

Paul Hodkinson: Yuji Watanabe and Paul Hodkinson hit me hard. Esparragoza and Ruelas were similar in punching power. It was either Watanabe or Hodkinson. Hodkinson bust my eardrum when he hit me. I remember hearing the explosion. I would say Hodkinson was the biggest puncher I faced. The headshots are the ones that tore me up.

Esparragoza: He had the reach and he knew how to use it. He was very good technically; he knew how to box. I was at the top of my game when I fought him.

McGuigan: It all started with Barry. He was a good all-around fighter; he was a world champion. All the rest of them were good. Barry was my crowning moment.