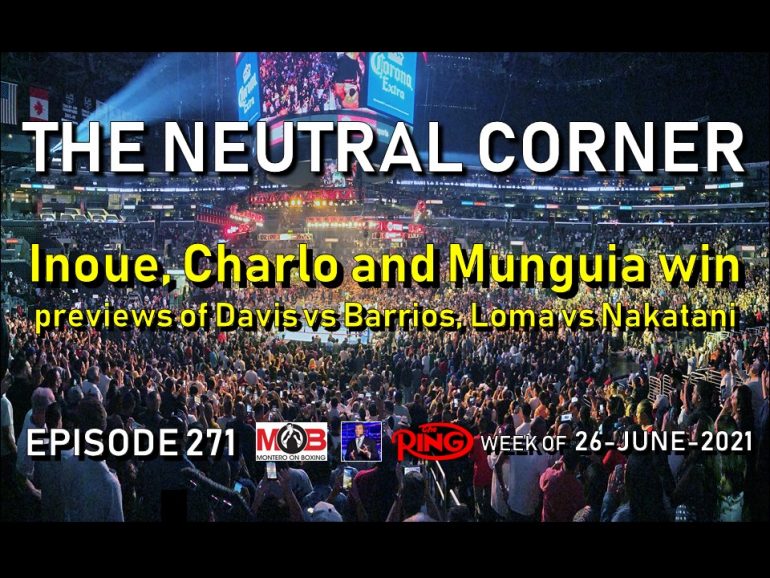 On episode 271 of The Neutral Corner boxing podcast, host Michael Montero caught up on all the recent news.

Undisputed lightweight champion Teofimo Lopez shocked the boxing world late last week when he tested positive for the COVID-19 virus, putting his fight with George Kambosos on hold until later this summer. The tentative date for the Triller PPV card is now August 14. Showtime and DAZN also have broadcasts that same day.

PBC announced that Guillermo Rigondeaux is out for their August 14 headliner on Showtime. He was replaced with Nonito Donaire, who will face John Riel Casimero at the Dignity Health Sports Park in Carson, California. The all-Filipino showdown will unify two bantamweight world titles.

Despite the Lopez-Kambosos card being postponed, there was still plenty of action on Saturday, June 19. In Mexico, UFC legend Anderson Silva pulled out an upset split decision win over Julio Cesar Chavez Jr. in an eight-round cruiserweight bout. In the main event, Chavez Sr., heralded by many as the greatest Mexican fighter of all time, entertained in his exhibition match against Hector Camacho Jr.

There were two cards of note in Texas. Golden Boy Promotions put on a card in El Paso, where Jaime Munguia stopped late replacement opponent Kamil Szeremeta in six rounds. In the co-main, Gabriel Rosado survived a first-round knockdown to score a major upset over heavily touted prospect Bektemir Melikuziev. In the third round, with Rosado’s back to the ropes, he caught the Uzbek coming in with a flush right hand that immediately sent him crumbling to the canvas. It was not only a contender for upset of the year, but knockout of the year as well. In Houston, Jermall Charlo scored a unanimous decision win over Mexican Juan Macias Montiel in a PBC on Showtime headliner.

“I’ve got Inoue No.3 on my pound for pound list behind Canelo and Taylor,” said Trey. “If he gets to fight the winner of that Donaire-Casimero bout, he could go up. I know they call him the “Monster” but I call him “Sake Bomb” because he hates livers.”

“I think the best fight right now for Jermall Charlo would be to face Demetrius Andrade,” said Andrew. “They both need a dance partner.”

“All the Charlo apologists are trying to make Juan Montiel out to be John Mugabi,” said Nacho. “I don’t like the double standard from the PBC pom-pom wavers. Anybody who’s not on that roster has to fight killer after killer, but their guy can fight a cherry-pick, go 12 rounds, and make it sound like he was fighting Marvin Hagler.”

“For Chavez Sr. to make 143-pounds at his age (58-years-old) is pretty impressive,” said Rich. “The fact that he’s still near the weight he fought at in his prime, at junior welterweight, is amazing. And the funny thing is, he performed better than both of his sons (Julio Jr. and Omar) on that card Saturday night.”