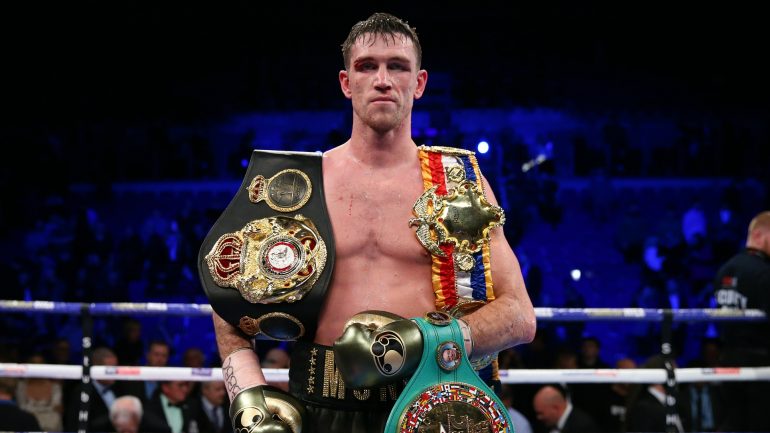 Callum Smith with his championship belts, including the coveted Ring Magazine championship
21
Jun
by Ryan O'Hara

It appears that Callum Smith has decided to heed the advice of Matchroom Boxing promoter Eddie Hearn.

Following his one-sided loss on December 19 to Canelo Alvarez, in Texas, the former Ring Magazine super middleweight champion and WBA titleholder was coaxed to take his efforts to the light heavyweight division, where the 6-foot-3 Liverpudlian (27-1, 19 knockouts) is expected to return later this year.

He isn’t the only former 168-pounder to move up to 175 pounds in recent years. Former WBO super middleweight titlist Gilberto Ramirez made the switch following a majority decision – which many observers argued could’ve been unanimous – win over Jesse Hart in their December 2018 rematch. The 30-year-old southpaw, who signed a multi-fight deal with Golden Boy Promotions in February, will return to the ring on July 9 to face longtime contender Sullivan Barrera at Banc of California Stadium, in Los Angeles.

“Mundo” will see his return fight streamed exclusively on DAZN after Hearn announced earlier this month that his promotional company had signed a five-year exclusive deal with the streaming service, ending a 25-year partnership with Sky Sports.

However he wasn’t the only Smith to make headlines. Callum’s older brother Stephen, a former junior lightweight contender, announced his retirement from boxing at the age of 35.

Smith (28-4, 15 KOs), the second of four brothers, was floored and outpointed by Jose Pedraza in an April 2016 fight for the IBF crown. Seven months later, Smith was again defeated by unanimous decision at the hands of contender Jason Sosa. A year later, Smith suffered a wicked tear on his left ear against Francisco Vargas in a technical decision loss.

While he never hoisted a world title, Smith ended his 13-year professional career on a winning streak, scoring a trio of points wins in 2019.

FIGHTING WORDS — CANELO ALVAREZ-CALLUM SMITH: THE BOLD AND THE BEAUTIFUL