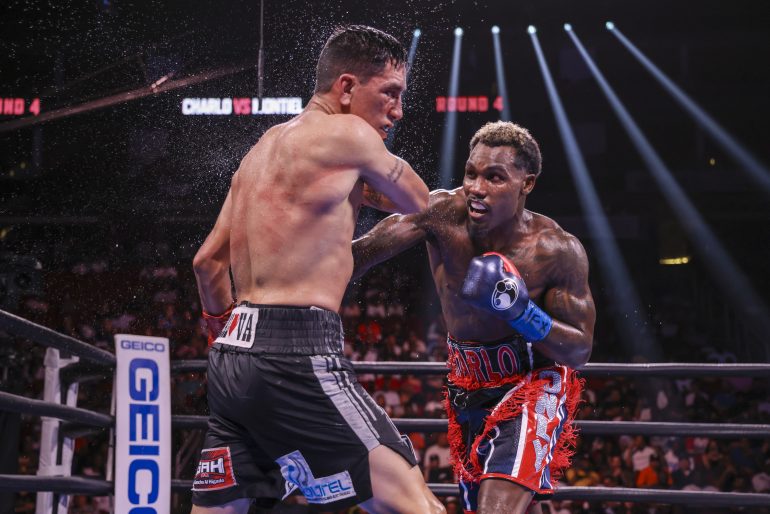 Montiel took combinations, body shots, head shots, right and lefts. He took tremendous punishment round after round almost to the astonishment of Charlo and anyone else watching the Showtime main event on Saturday night.

Montiel showed as much heart as you will ever see a fighter display in a boxing ring, so much so that Charlo had to pay homage to him after retaining his WBC middleweight world title for the fourth time in one-sided fashion at the Toyota Center in his hometown of Houston on a meaningful date to Charlo.

Charlo, who is Black, wanted to fight on the Juneteenth holiday, which celebrates the emancipation of slaves in Texas on June 19, 1865, and which was officially made a federal holiday this week when President Biden signed it into law.

“It took a real warrior to get in the ring with me and he fought each and every round as hard as he could,” Charlo said. “I could tell by the look in his eyes that he was a true warrior from the beginning and he wanted to fight.”

The outcome was never in doubt but what made it an entertaining and dramatic fight was seeing just how much Montiel could take and then shake it off as Charlo blasted him around the ring almost nonstop.

He may never accomplish that goal but he gave one hell of an effort against Charlo. 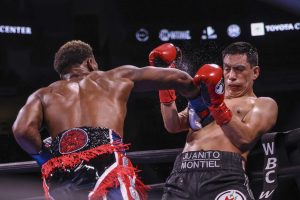 Charlo had Montiel reeling at points but couldn’t put him away.

When the fight was over, Charlo placed a WBC appreciation medal around Montiel’s neck.

“Montiel, thank you, man,” Charlo said to him. “Warrior! Warrior!”

Charlo (32-0, 22 KOs), 31, began backing up Montiel, the nephew of retired former three-division world titleholder Fernando Montiel, in the first round and, for some reason, Montiel switched to southpaw for long stretches of the fight, which did him no good.

Charlo marched forward and more or less did as he pleased. He clearly won the first several rounds but then turned up his attack with a very strong fifth round in which he rocked Montiel, trapped him in a corner and unloaded uppercuts and body shots.

Charlo had an even bigger sixth round, one that was so one-sided it could have been a 10-8 round even without a knockdown. Charlo teed off on him for long stretches. He trapped Montiel in a corner once again and let the punches fly.

Montiel (22-5-2, 22 KOs), 27, of Mexico, was rattled and had his hands dangling at his side, but shook his head at Charlo, who kept punching as referee Jon Schorle took a close look. Montiel was unsteady but got off the ropes and made a small comeback in the round when he landed a body shot. But Charlo closed the sixth by landing more combinations and a powerful left hook that rocked Montiel again seconds before it ended.

Charlo continued to work Montiel over in the seventh and eighth rounds but every now and then Montiel, whose face showed the damage of taking so many clean shots, would come alive and land a solid hook or jab. He also opened a small cut over Charlo’s right eye in the eighth round, the first time he had ever been cut.

“I never got concerned (when he came on),” Charlo said. “The best fighters in the world make adjustments. Everybody has to adjust. We had to adjust, that’s why we’re still here. I (have) never been cut. I never looked like this after a fight and I knew he was putting in the work. He put in that work to fight me.”

After surviving another onslaught in the ninth round, Montiel walked back to his corner and raised his arm in supposed victory even though he had taken enormous punishment throughout the bout.

After taking even more damage in the 10th round but again surviving, he again raised his hand in victory as he walked back to his corner.

Surprisingly, Montiel took charge for a good part of the 11th round, backing Charlo up and landing a hurtful body shot. Charlo seemed shocked that Montiel was still standing much less landing punches on him.

Montiel marched forward in the 12th round looking for a miracle shot, but Charlo remained poised, worked off his jab and maintained the control of the fight he had from the opening bell.

Charlo was proud of his considerable output.

“I seen the crowd behind me, my city was behind me. I put them on my back,” Charlo said. “Career high in punches? I still got more to come. I just went to work.”

He had taken the fight with Montiel because he has been unable to land a fight with another big name or titleholder in the division. He maintained after battering Montiel that is what he wants.

Making a fight with Golovkin is probably unrealistic at least for the rest of this year. He is on a path toward a unification fight with WBA titlist Ryota Murata in late December in Japan.

“Golovkin is about to unify so maybe we can fight for all those belts or if (Murata) wins, I’ll fight the winner,” Charlo said. “You know what a lion do when they hunt? There’s a difference between chasing and hunting. We on the hunt.