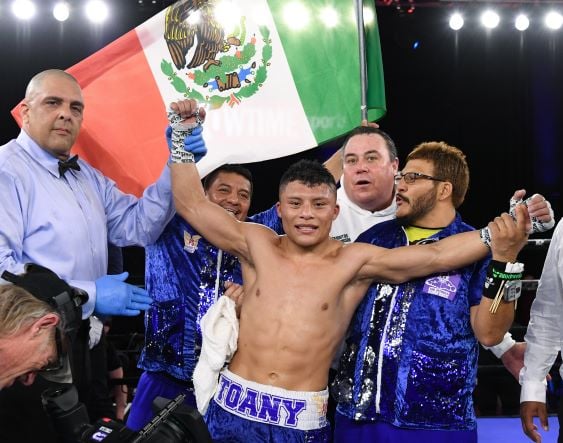 Isaac Cruz has become a legit prospect in recent months, but a signature and defining victory over a former world titleholder could transition him to become a contender in a competitive lightweight division.

Cruz is confident he is ready for the next significant step in his career when he faces Francisco Vargas Saturday night. The 12-round bout will take place at the Toyota Center in Houston and will precede the main event bout between WBC middleweight titleholder Jermall Charlo and Juan Montiel.

Both fights, along with the junior featherweight bout between former WBO titleholder Angelo Leo and Aaron Alameda, will air live on Showtime (9 p.m. ET/ 6 p.m. PT).

After defeating modest opposition in recent fights, including a decision victory over Thomas Mattice on February 14 of last year and a knockout win over Diego Magdaleno on October 31, Cruz defeated previously-unbeaten Jose Matias Romero by unanimous decision in his last bout on March 13.

Cruz (21-1-1, 15 knockouts) will take a major step-up in opposition against Vargas, who is a former WBC world titleholder at 130 pounds and has faced stellar opposition, including his all-out wars against Takashi Miura in November 2015 and against Orlando ‘Siri’ Salido in June 2016. Vargas would lose the WBC title in the following bout against Miguel Berchelt almost six months later.

The 23-year-old understand the importance of Saturday’s fight and what a win would do for his career.

“This is the most difficult fight of my career, and likely the most complicated,” Cruz told The Ring over the phone Tuesday afternoon. “He’s not just any fighter. Vargas is a former world champion at 130 pounds who has faced the very best in Salido, Miura, and Berchelt. I had to make the the best camp of my career because of the importance of the fight. We prepared very well. We will do whatever it takes to get the victory.

“I know Vargas is a difficult fighter to prepare against because he uses his elbows and leads forward with his head, and his opponents are prone to head butts. He has the advantage in experience, but we believe our preparation can get the job done for Saturday night.”

Cruz, who resides in Mexico City, is unbeaten in his last 16 fights since suffering the only loss of his career at the hands of Luis Montano in February 2016. He is well-known for his aggressive and fan-friendly style, but has improved his technical skill-set, leading to three of his last four victories to come by decision.

After signing with Promociones del Pueblo in Mexico and now fighting on Premier Boxing Champions (PBC) cards, Cruz has reaped the rewards of fighting on bigger platforms and on premium like Showtime. Cruz hopes to continued that trend Saturday night.

“I always like to give a show (for the fans),” said Cruz, who made his pro debut in March 2015 at the age of 17. “Whether they cheer for me or for (Vargas), I always want to provide entertainment for the fans and have our fight be the fight of the night. We’ve worked hard in the gym to prepare for the Vargas who wants to engage and fight or the one who will box. We will implement any plan, but do the best to give the fans a show.”

Cruz understands he is not yet at the elite level of the lightweight division, but would accept a fight against any of them at a moment’s notice.

A path towards a world title opportunity is the ultimate goal, but Cruz acknowledges getting better with each fight along with beating top opposition is the recipe for success.

“Anyone is a big challenge in the division and I am willing to fight any of the champions,” said Cruz. “I understand I have a lot to prove and I need one, two or three victories to then fight for a world title. I look at every fight as a world title fight because of the importance of what the next fight can bring as long as I continue winning.”

Not only does Cruz motivated to fight for a world title, but he also finds more motivation through his wife Toany and son Amadeo. Like many prizefighters, Cruz spends weeks, sometimes months, away from his family, but believes the sacrifices will mean something years from now.

“My son and my wife are my light and day. They mean everything to me. There’s times when I’m fatigued, but their smile motivated me that much more each day.

“They drive and motivate me more than they know. My success, including a win Saturday against Vargas, is driven by them.”