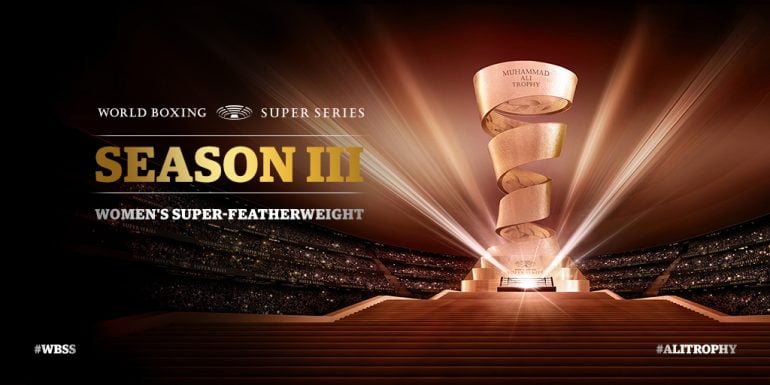 Women’s Super-Featherweights will quest for the Muhammad Ali Trophy, The Greatest Prize in Boxing, in Season III of the World Boxing Super Series.

After the high demand from broadcasters, fans, and sponsors WBSS AG is delighted to announce Season III of the World Boxing Super Series; one tournament, one weight class, and one winner to be the first woman to raise the Muhammad Ali Trophy.

Ali Trophy winners Aleksander Usyk, Callum Smith, Josh Taylor, Naoya Inoue, and Mairis Briedis forever testaments to what this sport can be when you match the best fighters in the ring. It catapults our champions into true greatness. It elevates the entire sport.

Women’s Super-Featherweight is the sixth edition and third season of WBSS since September 2017.

“Boxing is and has always been much more than a sport. It is a metaphor for life. The fighters walk into the squared circle with big dreams of winning and glory and sometimes even, a better life. In no other sport is so much at stake.”

“It will be much more than the greatest women’s boxing tournament. We plan to strategically help to broaden women’s boxing, both at the grassroots and elite level, and develop a professional environment where talents and profiles can grow and legacies are born.”

“As always, the WBSS will do everything to deliver the best fights and productions possible and we are dedicated to entertaining boxing fans around the globe. We can’t wait to turn the lights back on!”

“It’s been something we have talked about since our inauguration and it gives me great, great pleasure – and us great pleasure at the World Boxing Super Series to announce Season III; the women, the super featherweights.”

“The sport is an amazing place. Competition is hotter than ever. The super featherweights we feel is a division that has such depth and also allows those in the divisions around it to take part. We feel that this is the time, the right time, women’s boxing has never been this good. We are looking forward to a spectacular season.”

“I remember the first world title fight I promoted for Cecilia Brækhus two decades ago. It took place on an undercard. Cecilia went on to unify the sport and became a headliner in her own right, a national hero, a global ambassador for the sport.”

“Many other greats have also held the flag of female boxing. Going back to Regina Halmich, Jane Couch, Nicola Adams, Holly Holm, Katie Taylor. There are so many. But the opportunity the World Boxing Super Series brings for female boxing is second to none.”

“In short, the quest, another quest, for the Muhammad Ali Trophy has begun. The WBSS is back!”

Announcement on the Season III roster and schedule will be made in due course, in the meantime check the new WBSS webpage and social channels for updates.

Regina Halmich, Germany’ former Flyweight Champion and Hall of Fame member:
“This is very good news for women’s boxing. It was about time that my sport gets more credit. I really believe this will be a great tournament. I’m looking forward to great fights and new superstars.

Callum Smith, Britain’s WBSS Season I Super-Middleweight Champion:
“It’s good to see the women get a chance to lift the trophy this season. I want to wish everyone involved a massive ‘good luck’. I’m looking forward to watching a great tournament.”

The WBSS:
The World Boxing Super Series (WBSS) is a first-of-its-kind boxing tournament organised by WBSS AG since 2017. Each weight class features eight boxers competing in a knockout competition with the champion taking the Muhammad Ali Trophy, The Greatest Prize in Boxing.