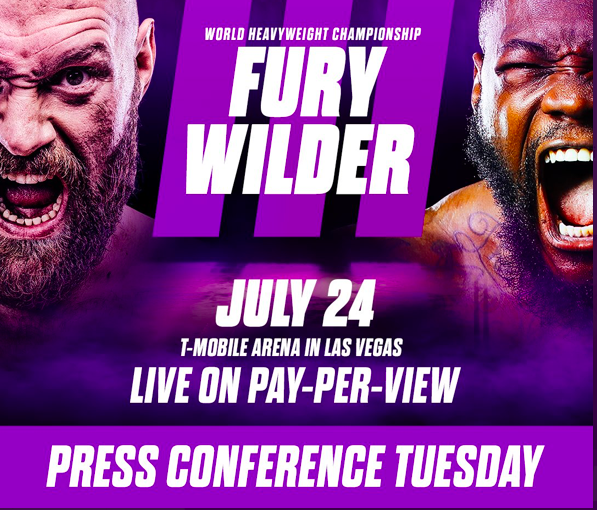 If you’re the sort to read into things, you may well have found it meaningful that a marathon staredown between Tyson Fury and Deontay Wilder in Las Vegas on Tuesday afternoon ended when Wilder broke the eye contact, and exited the stage, rather than take part in a Q ‘n’ A with reporters.

The Alabama boxer arrived late, about 25 minutes after the set start time for the event, put together by the Fury promotional team at Top Rank, and the PBC/TGB Promotions side, repping Wilder. The Alabama boxer kept his head-phones on the whole time, as emcee Jimmy Lennon presided and then handed things over to Crystina Poncher, who did her level best to fold Wilder into the proceedings.

He didn’t bite, so his new trainer, Malik Scott, served as a sub, and took queries from Poncher. Wilders’ silent treatment stood out as the most interesting element of the brief session, unless you are a fan, maybe, of Fury’s big ole naked torso. A shirtless Fury (30-0-1; age 32) looked happy to be doing this promotional outing, and, no surprise, he told the assembled and watchers on the stream that he expected to stop Wilder at T-Mobile faster than he did in the second fight.

When Wilder did speak, he kept it short and not overly sweet. He thanked his “Lord and Savior Jesus Christ,” his training team as well as his legal team. Then, some poetry: “Look, enough said, time to cut off his head, come July the twenty fourth, there will be bloodshed. Get your tickets now, I’ll see you soon.”

That was it as far as vocalizing for the 42-1-1 bomber who had far and away his worst outing the last time he gloved up.

On Feb. 22, 2020 at the MGM Grand, a beefed up Fury took it to Wilder, matching his pre-fight promise to be ultra aggressive. The TKO7 win for Wilder granted him the WBC belt that Wilder had kept when the two tree-toppers met for the first time, at Staples Center in LA on Dec. 1, 2018. That faceoff ended in a draw.

But Fury’s new strategy for the sequel paid massive dividends, and the Gypsy King took it a step further, as he customarily does, when he told attendees Tuesday that he wants to finish Wilder quicker this time. His trainer, Sugar Hill, had mentioned aloud after taking a question from Poncher that he’s seen considerable growth since they paired up, right before that second meeting between the rivals.

Now, said the nephew of the legendary tutor Emanuel Steward, Fury has one punch knockout power.

And, Fury intimated, his power reservoir will be even better come July 24, because he’s going to try to bulk up to 300 pounds. “What I’m going to do to Deontay Wilder this time,” said Fury, during the time span when he had a jacket on, “is I’m going to run him over as if I’m an eighteen wheeler, and he’s a human being. I guarantee he does not go past where he did before. Because before I only had five or six weeks of practicing what I was gonna do to him, this time I’ve had eighteen months of practicing what I’m going to do to him…I don’t believe he’s mentally, physically or emotionally involved in this fight, I think he’s doing it for the wrong reasons. When people do things for the wrong reasons, they always end up getting hurt.”

Wilders’ silent treatment meant we didn’t hear any of the protests he lodged after the second fight played out as it did. The trainer he booted, Mark Breland, was referenced by Fury. But he didn’t bring up the accusations that he got dosed with a depressant or that his ring walk costume was so heavy, it sapped his leg strength.

One of the top areas of intrigue for this battle will be this: Can Wilder and his new trainer, ex foe Malik Scott, jell and coalesce and decide on tactics that help the 35 year old power hitter live in the moment July 24, and not flash back to the difficulty he had with a man who had a couple inches and forty plus pounds on him?

Promoter Arum said that he foresees the third tussle will do better business than the second, which drew 850,000 or so PPV activations, based on the way tickets are moving on day one of availability.

The meetup finished when the staredown ended, after a few attempts were made by various parties to get Fury and Wilder to stop looking into each others’ eyes, and face front, so photogs could get a better angle. After Wilder chose to end the contest, Fury exulted, and chortled that he won the challenge.

But of course, we can’t know if any of the mind games being attempted during the presser had or will have an effect, but I did find myself wondering if Fury has picked up on something regarding Wilders’ motivation (or lack thereof) for this third engagement. We will get answers, in a little over a month.