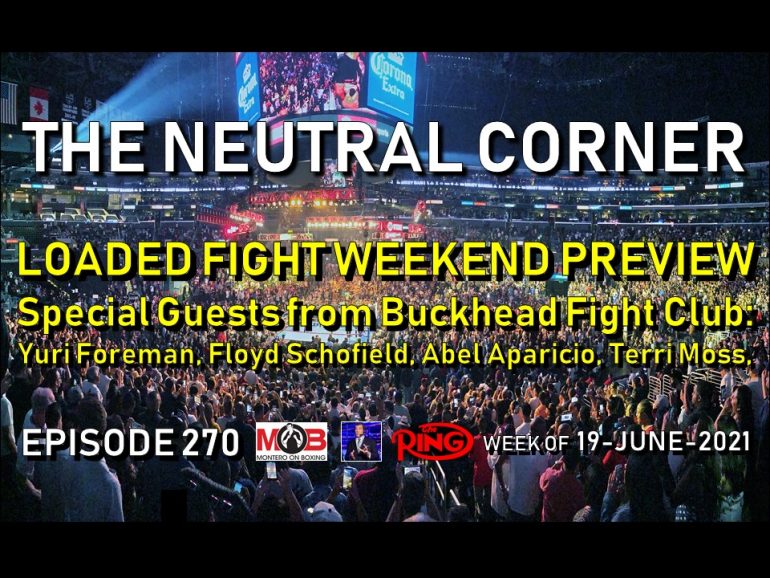 On episode 270 of The Neutral Corner boxing podcast, host Michael Montero was joined by several guests. This Saturday night, inside the Buckhead Fight Club in Atlanta, Georgia, promoter (and former fighter) Terri “The Boss” Moss will be staging a fight card headlined by former junior middleweight titleholder Yuri Foreman (35-3, 10 knockouts). They both joined the show along with Atlanta-based featherweight prospect Abel Aparicio (8-0, 3 KOs), who fights in the co-main.

There will be a live stream broadcast of the fight card. Montero will be calling the action from ringside along with former fighter and 1996 USA Olympic team member Zahir Raheem.

Foreman, who retired in 2017 and is staging a comeback, says he feels better than ever. “Everybody tells me, “Yuri, you’ve done it all, why come back?” But you cannot ask somebody who really loves what he does, and does it well, why he wants to continue. That would be like asking an artist not to paint anymore just because they created great art in the past. Even at age 40 I feel great, I feel strong.”

For Aparacio, this will be his first professional fight in Atlanta, and he couldn’t be more excited. “I moved to Atlanta when I was 13-years-old. I was born in Mexico, but my life is here. This is a big deal for me, to fight here in front of my family and friends. Now the fight is here so I have to perform, I have to put in 100% into everything I do.”

The price tag for the upcoming Showtime PPV card headlined by the Gervonta Davis vs Mario Barrios fight was recently announced at $70. Montero argues that it’s a tough sell, especially when considering recent PPV that were priced closer to $50. Further, the reality is that fans weren’t exactly asking for Davis-Barrios matchup in the first place.

Former Olympic gold medalist and heavyweight contender Alexander Povetkin announced his retirement last week. The Russian captured gold in the 2004 Athens games. As a pro, Povetkin was ranked among the top ten heavyweights for years. He came up short in championship challenges and Wladimir Klitschko (2013) and Anthony Joshua (2018) though.

The day after record TNC 270, it was announced that Teofimo Lopez had tested positive for COVID-19. The entire Triller PPV show that he was set to headline against George Kambosos was rescheduled for August 14.

In Las Vegas, Shakur Stevenson pitched a shutout over Jeremiah Nakathila. All three judges scored the junior lightweight bout 120-107 for Stevenson, who dropped the Namibia native in the fourth round. The fight headlined a Top Rank show on ESPN. In the co-main, Puerto Rican veteran Jose Pedraza handed Julian Rodriguez his first professional loss. The New Jersey native retired on his stool after the eighth round of their junior welterweight bout.