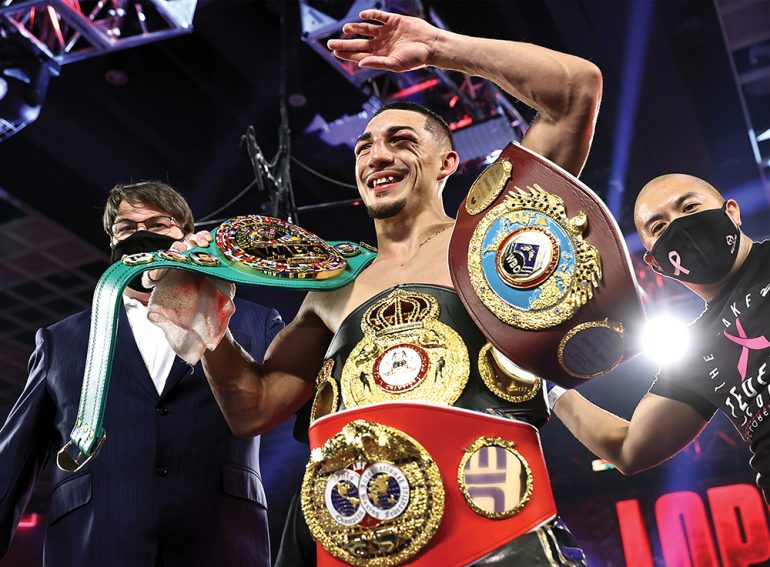 The Ring and unified lightweight world champion Teofimo Lopez has tested positive for COVID-19 and his mandatory defense against George Kambosos Jr. was postponed on Tuesday.

Lopez and Kambosos were due to square off on Saturday night in the main event of a Triller Fight Club pay-per-view card at Miami’s loanDepot Park, the home stadium of the MLB’s Miami Marlins.

However, Lopez took a COVID-19 test on Tuesday morning and it came back positive for the coronavirus.

“Teofimo Lopez has symptomatic COVID-19 which was confirmed this morning after testing,” Triller Fight Club said in a statement given to The Ring. “The Triller Fight Club card, including the main event, is being rescheduled to August 14, 2021.

“We send our best to Teofimo and his family and hope they get well soon, and we look forward to seeing this epic battle on August 14th.”

Kambosos was extremely disappointed to hear about the postponement.

“Absolutely devastated! I’ve been away from my kids for 13 weeks, I flew my pregnant wife over to be by my side, I put every bit of my life into this camp with my team,” Kambosos wrote on social media. “I would have been undisputed champion this weekend. I know it and you know it. Your (Lopez’s) actions and decisions have affected not only our fight but everyone involved in this fight! Pure irresponsibility on your whole side.

“Our time will come and I promise you and the world that I’m going to take you out worse than ever for everything. You can run but you can’t hide! As hard as it is to comprehend this right now, I remain focused on the end goal. I will be champion of the world. Thank you to everyone for the support world wide.”

That Triller Fight Club was even involved in the fight came as a huge surprise. It unexpectedly won the purse bid for $6.018 million, a number so big that it beat the two other bids combined — an offer of $3.506 million from Matchroom Boxing, which was bidding in conjunction with DAZN and Kambosos promoter Lou DiBella, and $2.315 million offered by Top Rank.

Although Lopez remains under contract to Top Rank, he and the company were in significant disagreement over the value of the fight during the negotiations, although they have since smoothed things over with Lopez signing an amended promotional agreement that will bump up his minimum purses and put him on ESPN pay-per-view. But Lopez still has an obligation to Triller for the fight with Kambosos first.

In his next fight, Lopez scored the biggest win of his career when he upset Vasiliy Lomachenko by unanimous decision – 119-109, 117-111 and 116-112 — to unify titles on Oct. 17, 2020 inside the bubble of the conference center of the MGM Grand in Las Vegas. Lopez, who was named The Ring 2020 co-fighter of the year with heavyweight champion Tyson Fury, not only retained his IBF belt but also took Lomachenko’s Ring/ WBO/WBA/WBC “franchise” belts.

Kambosos (19-0, 10 KOs), 27, of Australia, outpointed former featherweight world titlist Lee Selby in London in a title eliminator on Oct. 31 in London to earn the mandatory shot against Lopez.