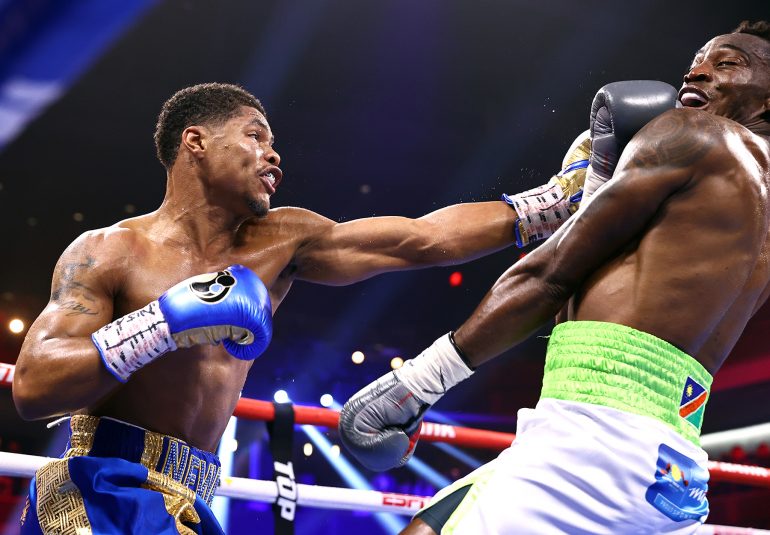 Shakur Stevenson told Jeremiah Nakathila that he would never lose to a cop, and he backed up his claim on Saturday, but failed to impress.

Stevenson, a highly-touted rising star and 2016 U.S. Olympic silver medalist, put on a boxing clinic in a shutout decision to easily win a secondary junior lightweight title in the main event of the Top Rank Boxing on ESPN+ card at the Virgin Hotels in Las Vegas.

All three judges scored the fight 120-107 for Stevenson, but he was not a fan of his overall presentation.

“To be honest with you, I didn’t really like my performance,” he stated sporting a mouse below his right eye. “I felt I could’ve performed a lot better, but it was an awkward fighter.

Also not a fan of the performance was ESPN ringside analyst and former two-division champion Timothy Bradley, who was very candid following the fight.

“I’m not gonna lie. I almost fell asleep watching because I was waiting on him to step it up like I know he knows how to, but that just shows he still needs some more maturing inside that ring.”

Regardless of the level of excitement, Stevenson won the fight with ease.

A pro for only four years, Stevenson won a vacant featherweight title at the age of 22 in the second-fewest fights in boxing history behind only the three bouts it took Vasiliy Lomachenko to accomplish the nod.

The aforementioned belt was also vacated by fellow 130-pounder Oscar Valdez (29-0, 23 KOs), who brutally knocked out long-reigning champion Miguel Berchelt to lift the WBC belt in a Knockout of the Year caliber performance on February 20 in at the MGM Grand Conference Center in Las Vegas.

“If I had the choice, I’d take Oscar Valdez [for my next fight].”

It was an economical first round for Stevenson (16-0, 8 KOs), a southpaw from Newark, New Jersey, but he did clip Nakathila with a looping left hand that wobbled him.

In round two, Stevenson dropped Nakathila with a sharp right uppercut, but referee Celestino Ruiz incorrectly ruled it a slip.

Stevenson got the knockdown for real in round four when he connected with a check right hook that sent the unheralded contender Nakathila to the canvas for the first time in his career.

Stevenson landed with a stiff left hand in round seven, but Nakathila (21-1, 17 KOs), a 31-year-old police officer from Namibia, continued to come forward but offered little resistance.

The 23-year-old Stevenson dominated the action, but the fight was also marred by referee Celestino Ruiz warning the fighters at least 34 times, which also happened to be more than the number of punches landed for Nakathila through 12 rounds.

“I tried to [get him out of there] a little bit, but I started getting hit with some solid shots,” he added. “I ain’t really like it, but next time I’m going to work on moving my head a little bit more and step it up a little more.”

In round 12, Stevenson dropped Nakathila, who came into the bout with 10 consecutive knockouts with another check hook, but Ruiz missed it again. However, he didn’t miss the foot touching, which is very common in righty vs. lefty fights.

The 35-year-old Herring, who served two tours in Iraq with the U.S. Marine Corps, brushed off Stevenson’s words.

“That’s just boxing talk to me,” he said. “At the end of the day, the only thing that really matters is the fists doing the talking.”