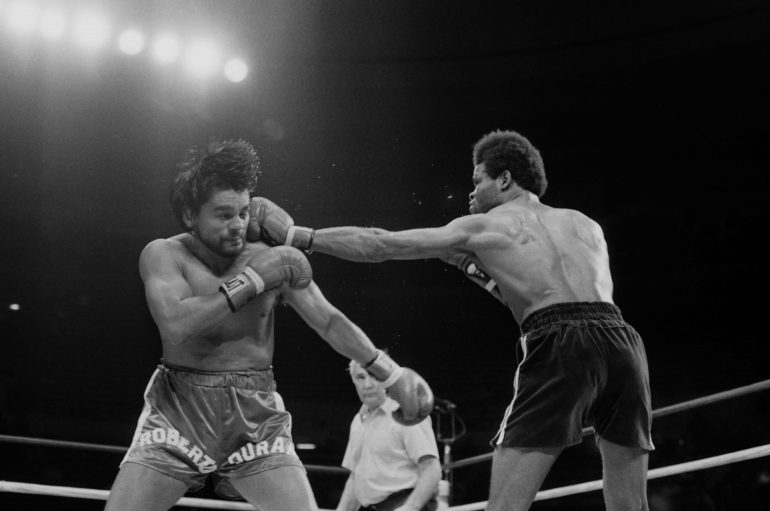 DETROIT - SEPTEMBER 4,1982: Kirkland Laing (R) connects with a left jab against Roberto Duran during the bout at Cobo Hall on September 4, 1982 in Detroit, Michigan. Kirkland Laing won by a SD 10. 1982 Upset of the Year - Ring Magazine. (Photo by: The Ring Magazine/Getty Images)
10
Jun
by Lee Groves

Kirkland Laing, best known for his signature upset victory over the legendary Roberto Duran in September 1982, died Wednesday at age 66.

The native of Jamaica compiled a record of 43-12-1 (24 KO) in a career that spanned nearly two decades and saw him win British, Commonwealth and European welterweight championships. He was nicknamed “The Gifted One” for his cat-quick reflexes, his ring IQ and his ability to avoid punishment despite standing in front of opponents with both arms dangling at his sides.

Laing turned pro at age 20 with a second-round knockout of Joe Hannaford in Nottingham on April 14, 1975 and he captured the British welterweight title for the first time with a 10th round TKO of Henry Rhiney that raised his mark to 15-0-1 (6 KO). After notching three non-title wins over Des Morrison (W 8), Salvo Nucifero (W 6) and Colin Ward (KO 5), Laing lost the belt in his first defense against future three-time world title challenger Colin Jones by ninth-round TKO, then lost the rematch, again by ninth-round TKO, nearly 13 months later.

After winning two of his next three fights, Laing signed to fight Duran on September 4, 1982 at Detroit’s Cobo Hall — a fight that aired live on ESPN’s Top Rank Boxing series. On paper, this was to be Duran’s “comeback” fight after losing a unanimous decision to WBC super welterweight king Wilfred Benitez in January, but the Duran that stepped between the ropes was not the beast who ruled the lightweights for nearly seven years or the force of nature that dethroned Sugar Ray Leonard in the “Brawl in Montreal,” but instead was a pudgy, listless and ill-prepared 155-pounder. Duran had gotten away with less-than-stellar conditioning in previous fights, but against a supremely confident and superbly prepared Laing, Duran would pay a price — a big price.

Curiously, Duran offered to touch gloves at the opening bell , and that attitude seemed to set the tone for the entire match from Duran’s standpoint. Conversely, Laing, who refused the gesture, proceeded to go about his business. With his hands held lower than the ideal, he searched for openings behind fast-twitch feints. Duran often lunged at Laing, who was further helped by the giant 24-foot-square ring. The British-based Jamaican soon realized how much quicker he was than his far more experienced foe, and, starting in round three, began spearing Duran’s face with piercing blows.

Those blows created welts on Duran’s left cheekbone, a blemish that was made worse by Laing’s flush rights. Laing’s bravado steadily increased, and soon he felt comfortable enough to stand flat-footed before the Panamanian great. His ring generalship, defensive skills and clean punching piled up points against the docile Duran. At the start of round 10, Duran extended both gloves for the customary last-round tap and Laing, once again, rejected the entreaty. An overhand right to the side of the head in the fight’s final minute caused Duran’s legs to dip, and the future Hall of Famer’s punches were no longer strong enough to keep Laing from trading with him at close range.

Although ringsiders had Duran losing eight of the 10 rounds and ESPN scorer Al Bernstein had Laing ahead 88-83 entering the final round, the official cards were much closer. Bernard Humphrey had Duran up 96-95 but he was overruled by Nick McAlpine and Stuart Kirschenbaum, both of whom had Laing a 96-94 victor. Laing’s split decision victory was named THE RING’s 1982 Upset of the Year, and, just like that, Duran had lost for the third time in his last five fights while Laing vaulted into the championship picture.

But it was not to be. The off-kilter rhythms that made him a masterful performer inside the ring also ruled the way he conducted his life outside it, and for reasons only known to him, he would not fight again for another one year and six days. Worse yet, in that return, he was TKO’d in round 10 by Fred Hutchings, a result that effectively removed him from world title consideration for the remainder of his career.

Laing returned to the ring 14 months after the Hutchings loss and he won 10 of his next 11 fights, regaining the British welterweight title by defeating Sylvester Mittee (KO 5) in March 1987 and retaining it against Rocky Kelley (KO 5) two fights later. His string of success earned him a shot at the vacant European welterweight championship against 72-4 Italy-based Mauritanian Nino La Rocca in Vasto, Italy in April 1989, but the 34-year-old Laing lost by unanimous 12-round decision. His last great burst saw him retain his British title against the 14-0 Trevor Smith (KO 6), win the European championship against the 37-1-1 Antoine Fernandez (KO 2) and stop Rocky Berg in two rounds in October 1990, but that run ended 35 days later when he lost the European title to former WBA super lightweight champion Patrizio Oliva by unanimous decision in Italy.

Over the next four years, Laing experienced highs (a fifth round TKO over the 11-0 Dean Cooper as a 39-year-old in July 1993) and more than his share of lows such as losses to world title challengers Donovan Boucher (KO by 9) and Kevin Leusching (KO by 5). Following a fifth-round TKO loss to future WBC super middleweight champion Glenn Catley in November 1994, the 40-year-old Laing called it a day.

Laing’s life included bouts with alcohol and drug abuse, and his passing came eight years after he fell from a fourth-floor balcony in East London. But those fortunate enough to have seen him fight will remember him for his speed, his athletic gifts, his daring and his courage.

Lee Groves is a boxing writer and historian based in Friendly, West Virginia. He is a full member of the BWAA, from which he has won 20 writing awards, including two first-place awards, since 2006. He has been an elector for the International Boxing Hall of Fame since 2001 and is also a writer, researcher and punch-counter for CompuBox, Inc. He is the author of “Tales from the Vault: A Celebration of 100 Boxing Closet Classics” (available on Amazon) and the co-author of  “Muhammad Ali: By the Numbers” (also available on Amazon). To contact Groves about a personalized autographed copy, use the email [email protected] or send him a message via Facebook or Twitter (@leegrovesboxing)