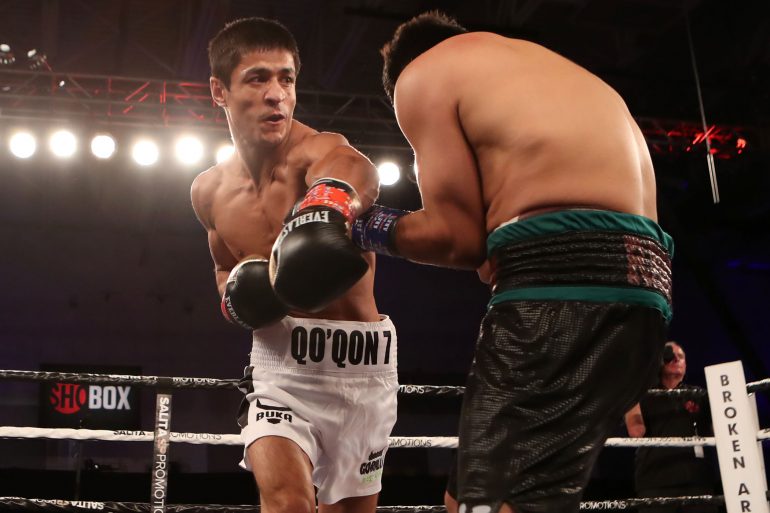 Unbeaten junior welterweight contender Shohjahon Ergashev, who is ranked No. 9 by The Ring, will face Salimu Jengo in a stay-busy fight Friday night.

The 12-round bout will take place at the State Tennis Club in Tashkent, Uzbekistan.

The 29-year-old Ergashev returned to action in Krasnogorsk, Russia on November 16, weeks after the original postponement, winning by knockout before round 3 after opponent Dzmitry Miliusha was not able to continue due to suffering an injury during the fight. after the second round.

Ergashev (19-0, 17 knockouts) has been promoted by Dmitriy Salita, but both sides have been in litigation over the last several months. Ergashev accepted a fight in September in Russia, which was a breach of his promotional agreement with Salita, who was able to get an injunction preventing Ergashev from fighting on that date.

Ergashev has in turned refused to allow Salita to promote any of his fights, also refusing to communicate with him. Salita declined to comment for the story.

Ergashev is the promoter of record for Friday’s card.

Ergashev is best known for having appeared on the popular ‘ShoBox’ series a handful of times. His last appearance occurred on January 17 of last year, brutally knocking out Adrian Estrella of Mexico in the opening round.

Ergashev’s most notable victories were a knockout victory over Sonny Fredrickson in January 2018 and a decision victory over Mykal Fox almost 13 months later. Both Fredrickson and Fox were unbeaten entering their respective fights against Ergashev.

Jengo (16-3, 10 KOs), who resides in Tanga, Tanzania, defeated Eduardo Mancito by unanimous decision in his last bout on November 28. The 25-year-old has won six of his last seven bout since losing by knockout to fringe lightweight contender Xolisani Ndongeni in August 2018.

Najmitdinov (16-1, 9 KOs), who resides in Tashkent, has not fought since October 2019, when he knocked out Giorgi Khutsishvili in the opening round. The southpaw has won his last six fights since losing to Viktor Postol in September 2017, a fight in which Najmitdinov dropped Postol in round 5.

Turksadze (6-9-1, 2 KOs) has lost nine of his last 11 bouts after starting his career winning his first four fights.

Middleweight Ulugbek Khakberdiev (6-0, 4 KOs), who also resides in Uzbekistan, will face Dzmitry Atrokhau (16-9, 7 KOs) of Belarus in a 10-round bout.