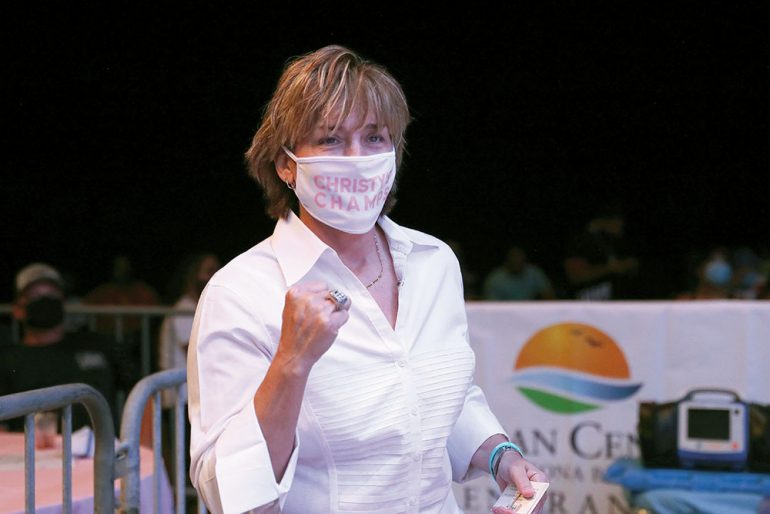 While the card may be shorter than her usual shows, Christy Martin says she’s excited about the young talent that will be showcased on her card this Friday in Orlando, Florida.

Martin, a women’s boxing pioneer and International Boxing Hall of Fame inductee, will be promoting a ten-fight card at Avanti Palms Resort.

The card will feature Nigerian heavyweight Raphael Akpejiori (10-0 10 knockouts), a 6-foot-8, 250-pound heavyweight from Miami by way of Lagos, Nigeria. Akpejiori, 30, will face Brandon Spencer (9-18-3, 6 KOs) of Augusta, Georgia in an eight round bout.

Also in action is Armani Almestica, a 21-time national champion from Orlando who is part of the Puerto Rican national amateur team. Almestica (2-0, 2 KOs) is trained by his father Freddy Almestica, who, in a twist of irony, was once part of Christy Martin’s amateur boxing team in the mid-90s.

“Freddy learned from the best,” Martin jokes. The 19-year-old lightweight Armani Almestica will face Weusi Johnson (3-18) of Wilmington, Delaware in a four round bout.

“The kid is special, he’s gonna be champion. There’s just no reason he shouldn’t be a champion,” said Martin of Armani Almestica.

Another member of the Puerto Rican national team – a middleweight named Luis Rodriguez – will make his pro debut in a six-round bout against Alberto Delgado (1-16-4, 1 KO). Rodriguez is a 5-time national champion in Puerto Rico.

Nick Sullivan (2-0, 1 KO) of Norfolk, Virginia will also be in action in a four-round lightweight bout against Gabriel Chacon (0-2). Sullivan turned pro with Golden Boy Promotions but recently became a promotional free agent.

Sullivan says Chacon is a “pretty tough opponent who has a very strong desire to win and I look forward to being the best fight on this card.”

As for her own return to the spotlight – her 2020 Hall of Fame induction that was postponed by the pandemic – Martin jokes that she doesn’t think it’ll ever happen.

“I spoke to [IBHOF Executive Director Ed] Brophy just a few months ago and said, ‘Hey can I at least get my ring? I’d like to wear it in case I get hit by a truck and die next month,'” said Martin.

Tickets priced at $80 and $45 can be bought at Eventbrite. First fight is scheduled for 6 p.m.

The entire show can be streamed live on VivaLiveTV for the pay-per-view price of $19.99.

A maximum capacity crowd of 500 will be allowed to attend in person.