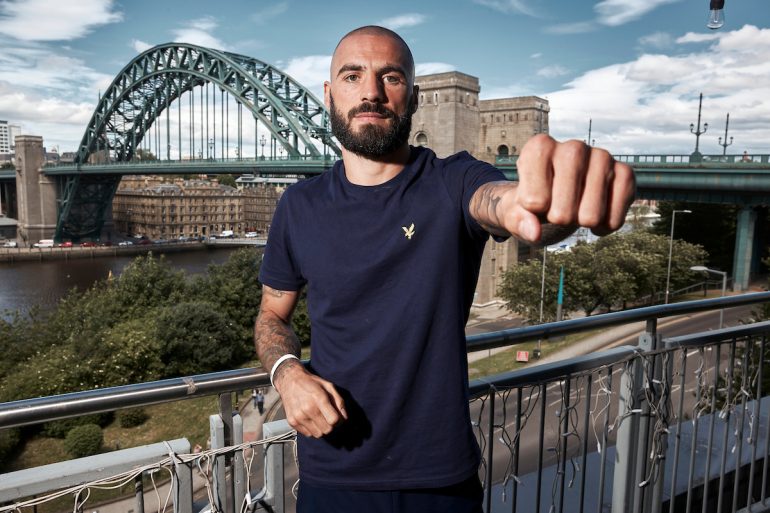 Lewis Ritson returns to action for the first time since his disputed victory over Mexican veteran Miguel Vazquez in October.

Ritson won a decision that night but faced the wrath of fans who felt the visitor deserved the verdict.

It’s easy to see how the pressure might be on him this week as he prepares to meet Jeremias Nicolas Ponce on Saturday in front of 1,000 fans at the Eagles Community Arena in Newcastle, England but Ritson contends otherwise because he’s done everything he’s needed to do in the buildup.

He’s been training back home, coached again by his father David having left former trainer Neil Fannan in the Vazquez aftermath, and now Ritson says he feels a freshness he’s not felt for years.

“For being a high-pressure fight, it’s probably the most laidback I’ve been in a long, long time when it comes to fight week because it’s been a great camp and I’m just ready to go now,” he said. “I’ve done my weight differently so I’m not doing a water cut anymore… I’ve come to the bubble and I’m about a pound over, so weight’s not a worry. There’s nothing in my head I’m worried about and I just cannot wait for Saturday night.”

He admitted that last time out he underperformed and he accepted responsibility. Not only did that spark a change in his training arrangements but he wanted to be home more with his partner and their young daughter.

“I think after the performance and the way it went down, we needed to [change], really,” he explained, having admitted he was fortunate to get the decision over Vazquez. “I think we needed a bit of freshness so I’ve come back home and I’ve got my little daughter at home and I’ve got another daughter on the way – I’m a family-orientated man anyway, I’m either in the gym or with my partner and my daughter – so I had to make a few choices out of the gym and I think we’ll see it’s been the right choices during this fight. I’m back with the old man, he’s back in charge and it’s the same team I won the fight against Robbie Barrett with, which was arguably one of my best performances.”

And while there are plenty of coaches around the U.K. with momentum, and some reached out to offer him help, Ritson was always certain he was going to go home.

“I had a lot of offers from a lot of good coaches,” he stated. “Hartlepool [where Fannan was] is only an hour away from my house, but I was there six times a week and it’s no fun saying to my partner or daughter, ‘Oh, by the way, I’m off for 12 weeks down the country.’ It was always going to be coming home or nothing, so I had a lot of offers but none I would have said yes to.”

The pandemic could have played a part in that. It certainly has done for plenty of fighters, particularly the likes of Ritson and Josh Warrington whose crowds have had worldwide acclaim for their volume and passion.

Not only have logistics been interfered with, but the look and feel of fight night has been drastically altered.

“You’ve seen all the North East lads have a bit of a hard time of it,” Ritson added, of having to box behind closed doors. “When you’re used to fighting at the Arena, [with] 9,000 going mad, that’s what you’re used to. I was on the ramp and used to Oasis playing and usually the place is going mad but you could really hear a pin drop in the fight bubble, it was horrible, but now we’re going to fight in front of a thousand and we’ll hear a bit of hustle and bustle.” 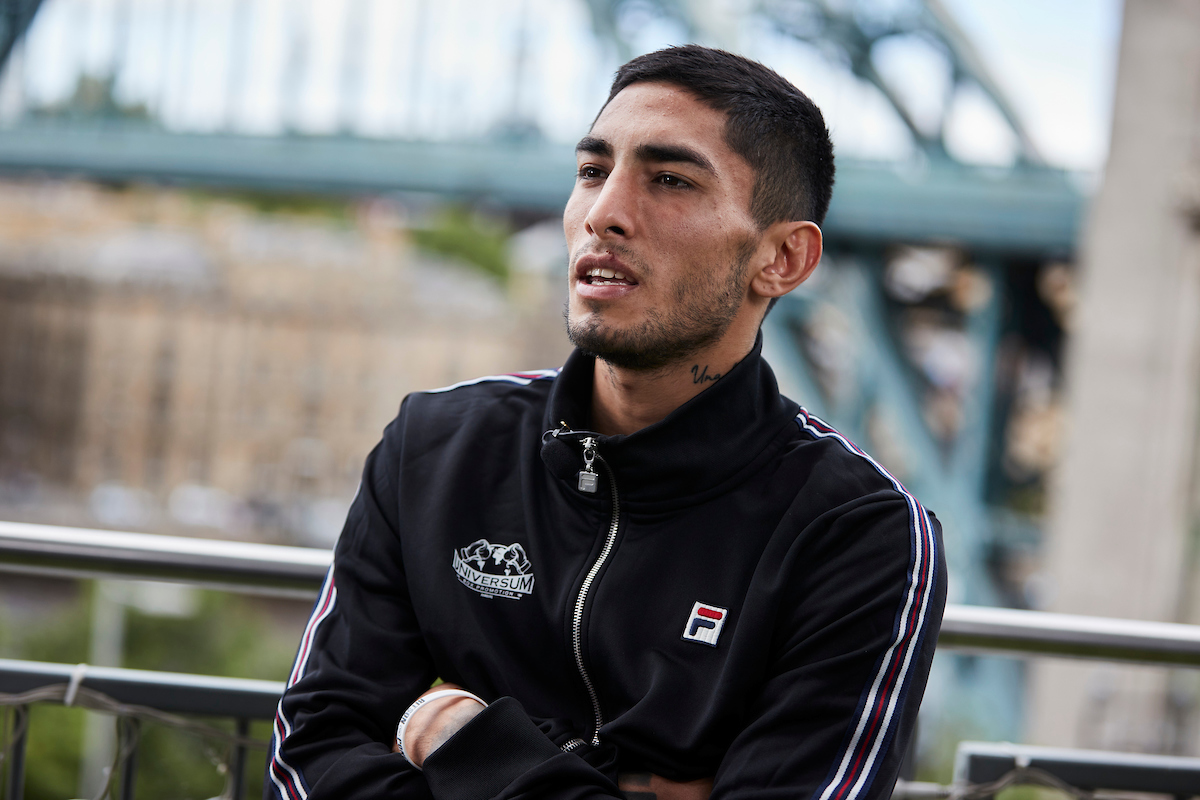 Of course, Ritson has faced his detractors. He fell short against Franceso Patera for the European title, losing a split decision in 2018, and for many he was beaten by gatekeeper Vazquez. In other words, the critics reckon he’s found his level and he understands that.

“Yeah, I do a little bit,” the 27-year-old continued. “I think people are forgetting in the Patera fight I won the first five rounds quite easy, but it was down to me. I wasn’t making weight right, I was caught with a bodyshot, and couldn’t recover from it. The Vasquez fight was more down to the performance but it’s the nature of the beast with social media… You can go on and slate anyone and if one person does it, everyone can jump on the bandwagon and gets behind it. We know who we’ve sparred and what level coaches have said we can get to and you’ve just got to take the social media side of it with a pinch of salt and just try to get on with it. I think I can go the full way [to a world title], especially if Josh Taylor vacates and he leaves the belts vacant and we can get passed Ponce the next one could potentially be the big one for the world title. I believe that, apart from a few fighters out there like [Regis] Prograis and Taylor who are a bit special, on my night I can beat anybody.”

And what of Ponce, the unbeaten Argentine who stakes his 27-0 record (17 stoppages) in his own efforts to become the IBF’s mandatory challenger at junior welterweight.

“He’s a bit like me,” Ritson added. “He’s calm, likes to come forward, likes to throw the jab, likes to throw bodyshots and likes to throw punches in bunches, that’s exactly our style, really, so I think the fans are in for a good fight if he comes with the attitude that he’s going to try and stop us.”

Several months have gone by since Vazquez.

Ritson has made the team change, he’s ticked over in the gym before this camp, he enjoys taking his daughter out for rides on her Shetland pony and she’s got a competition coming up. Boxing pays the bills, but his family is his life. His mantra is the reverse of many a fighter in that he works to live, he doesn’t live to work.

“I’ve been boxing since I was eight years old and I love the sport but the sport’s not my life,” he admitted. “My family’s my life, but if I fought Ponce on Saturday, broke my hand and couldn’t box again, I’m not one of those people who would be depressed about it, I’d just think, ‘Well, I’ve got my family at home’ and that’s the way I think. It’s hard to describe, I love it [boxing] but if I couldn’t box again, I wouldn’t be devastated. It’s a weird way to describe it.”

So, what has been missing?

Whether it was getting over the line against the old Mexican last time out or falling short against Patera, what’s Ritson been missing to take his career to the next level?

He actually thinks he has all the tools, it’s just the ability to show he has them on fight night and it’s the psychological transition of the gym to the prize ring that must be conquered to get to where he wants to be.

“It’s a good question,” he said, pausing for a few moments. “I know sparring’s sparring but we’ve sparred a lot of former world champions and a lot of European champions and we’ve done great, so if I can take the way I spar into fights then that would be great. I probably spar better than I fight but if I could change that and get that the other way around then I think people will see a different me and one who can go on to those next levels.”

Ritson-Ponce plus undercard action will be broadcast by DAZN in the U.S. and Sky Sports Action/ Main Event in the U.K.