The Neutral Corner: Episode 269 Recap (Did I miss anything by passing on Mayweather-Paul?) 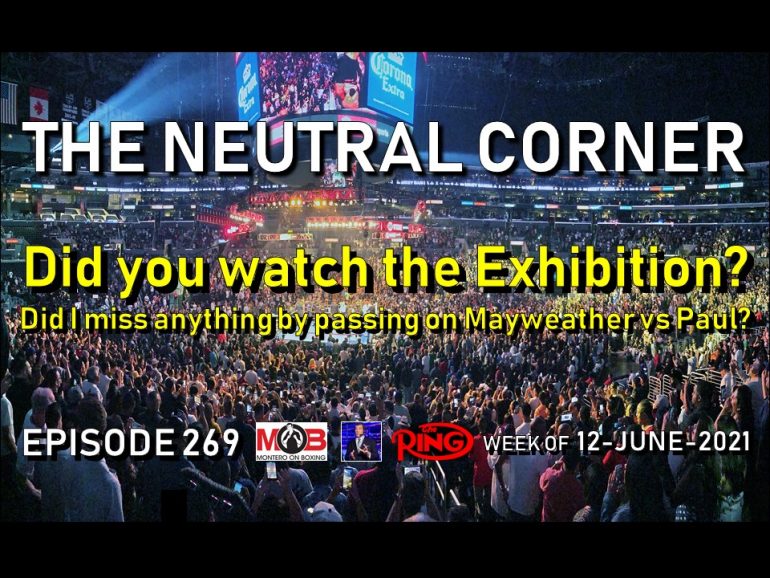 On episode 269 of The Neutral Corner boxing podcast, host Michael Montero returned after a one-week hiatus and caught up on all the recent news.

The biggest headline was related to light heavyweight veteran Jean Pascal, who tested positive for not one, but four banned substances ahead of his scheduled rematch with Badou Jack. Per tests administered by the Voluntary Anti-Doping Agency (VADA) on May 14 and May 17, Pascal was positive for Epitrenbolone, Drostanolone, Drostanolone Metabolite A and Erythropoietin, also known as EPO.

In other news, Triller recently announced that sports commentary legend Jim Lampley will begin commentating on their platform this month, beginning with the Lopez vs. Kambosos PPV card on June 19.

There were two major cards of note on Saturday, May 29. Devin Haney scored a unanimous decision win over veteran Jorge Linares in Las Vegas, and Nonito Donaire pulled the upset special with a KO 4 win over the previously undefeated Nordine Oubaali in Los Angeles.

With the win, Haney proved himself as a legitimate top 10 lightweight. Meanwhile Donaire became the oldest fighter to win a bantamweight title, further cementing his future hall of fame credentials.

On Saturday, June 5, Daniel Dubois rebounded from his loss to Joe Joyce last November, scoring a KO 2 win over Bogdan Dinu in the U.K.

On Sunday June 6, Floyd Mayweather and Logan Paul fought to the eight-round distance of their exhibition bout, which headlined a Showtime PPV card from Miami. On the undercard, Luis Arias eked out a split decision victory over Jarret Hurd in an upset. Badou Jack also stopped replacement opponent Dervin Colina in four rounds.

“I can see Teofimo Lopez fighting Jose Ramirez for one of the vacant 140-pound titles once Josh Taylor moves up,” said Esan. “Ramirez said he’d like to face Lopez for any of the belts. Teo is big at 135 but I don’t know about 140.”

“I told everyone that Devin Haney would not stop Jorge Linares,” said Jack Alter. “Haney has no power at all. He couldn’t hurt an old Linares at all, couldn’t hurt a faded Yuriorkis Gamboa.”

“To me, the Lopez versus Kambosos fight looks like an easy under,” said Thad. “I think this is going to be a KO for Lopez early. Kambosos is probably going to come out and open up on Teofimo. These Australian fighters are pretty tough, but they don’t have the kind of sparring down there to prepare them for the big punchers. Lopez is a big, big guy at lightweight.”

“Jarrett Hurd looked sluggish against Luis Arias,” said another caller. “He’s always been a decent fighter, but I think it’s going to be tough for him to bounce back from this loss. He was never the best boxer and he took some punishment in his recent fights.”

“I find the whole Triller production and commentary interesting,” said Andrew. “Showtime signed the Paul brothers, which I don’t like. If you’re going to be a sideshow, do it right! Triller does sideshows right. I’m curious about the Lopez versus Kambosos fight, how a legitimate boxing card will look on Triller.”