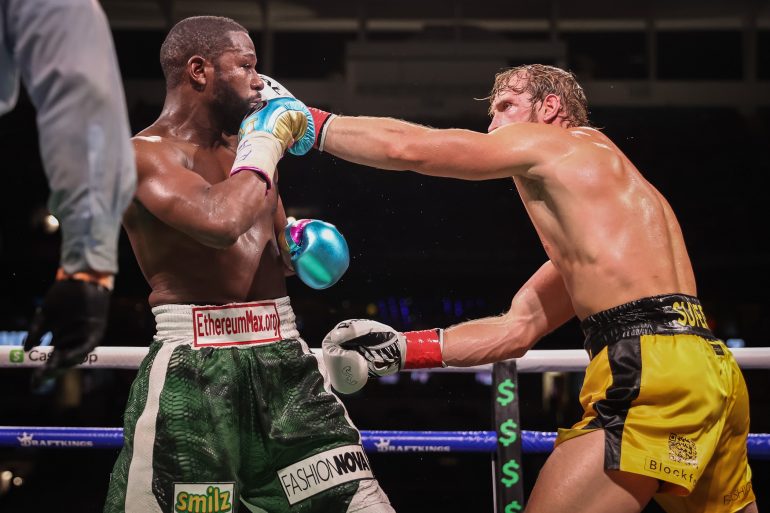 MIAMI — Floyd Mayweather Jr. graced an American boxing ring for the first time in four years Sunday, though his eight round bout with social media superstar Logan Paul was anything but an official pro boxing event.

Paul, 26, weighed nearly 35 pounds heavier than the 44-year-old Mayweather (189.5 pounds to 155 pounds), but all the size and bulk he had over Mayweather only served to keep him standing following one-sided boxing action at the Hard Rock Stadium.

Mayweather was credited with landing 43 of his 107 punch attempts in the exhibition, good enough for a 40 percent connect rate. Paul, whose only previous pro boxing experience was a split decision loss to a fellow YouTuber named KSI in November of 2019, landed 28 of 217 attempts for a 13 percent rate.

Just as in his 2017 bludgeoning of pro boxing debutant Conor McGregor, Mayweather started slowly, allowing the larger Paul to throw his best punches in the first two rounds. Paul excited the crowd at the end of the first round, throwing everything he had at Mayweather’s gloves to little effect. From that point, it was all Mayweather.

The 5-division champion, who was inducted into the International Boxing Hall of Fame this year, used the 6-foot-2 Paul’s body and head as a canvas on which to paint. Mayweather dusted off an old trick in round three, popping his jab downstairs to freeze the taller man. Mayweather uncorked his first serious punch in that jab, landing a left hook on Paul as he tried for a counter uppercut.

Paul landed his final punch of note in the fourth, a clubbing right hand that made a loud noise but did nothing to deter Mayweather.

Paul, who had suggested that he’d be big enough to hurt Mayweather, saying before the fight that there are weight classes for a reason, ended the fifth round by running away from the advancing Mayweather. Mayweather landed a right hand after the bell, seemingly just because he could.

As Paul tired, he attempted to use his size to lean on and wear down Mayweather, though it did little to slow down the punishment. Paul got in one last taunt at the final bell, pointing to the clock as if to brag about going the distance with a living legend.

Mayweather, who had participated in side shows outside of pro boxing, including a wrestling match against WWE star The Big Show at WrestleMania, and a blowout of Japanese kickboxer Tenshin Nasukawa in 2018, said he would continue to put on exhibitions in the future.

“You’ve got to realize, I’m not 21 anymore but it’s good to move around with these young guys, test my skills just to have some fun,” said Mayweather, who added that Paul was “better than I thought he was.”

For a fight titled “Bragging Rights,” that would serve to be the only in-ring accomplishment Paul would have to brag about. Still, Paul was happy with the outcome and experience.

“I don’t want anyone to tell me anything is impossible ever again. The fact that I got in here with one of the greatest boxers of all time, it proves the odds can be beat. Anyone can beat the odds and do great things in life,” said Paul.

“This is one of the greatest nights of my life, I’m happy.”