I’ll watch the Mayweather v Logan Paul bout with air of acceptance, or is it resignation 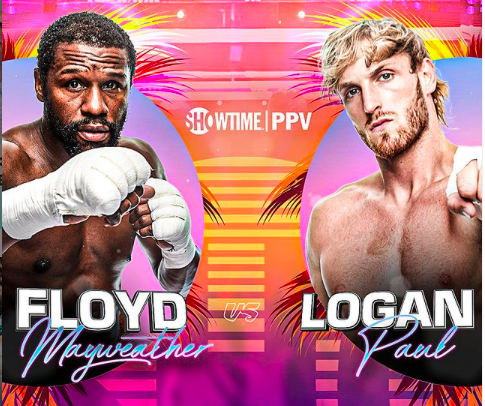 For a few years, I’ve done a thing on Twitter where I ask people how pumped up they are for a certain fight, or fight card.

“Buzz Check,” that’s what I call the informal poll. It used to be from one to ten, ten being most psyched up, but somewhere along the line I changed the numbering scale to go from zero to ten. 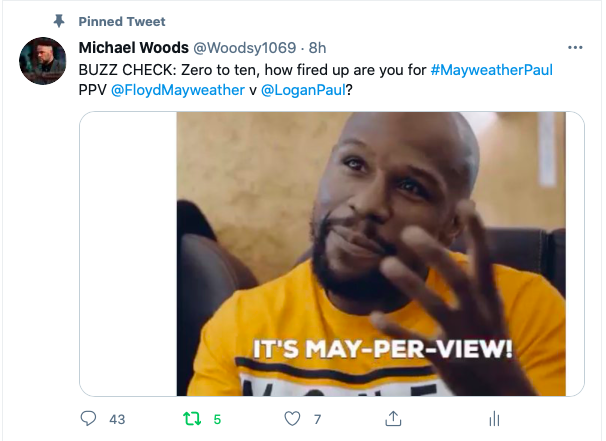 The zero would come in handy every now and again, but it really did today, when I did the “Buzz Check” for this Floyd Mayweather exhibition outing against Logan Paul.

I really don’t recall when I switched to zero from 1, but it came before we started seeing “celebrity boxing” events featuring the fighting Paul brothers. I’m guessing it came about when I got the memo fully injected into my brain that we weren’t going to see Terence Crawford fight Errol Spence anytime soon, if at all.

That sad realization resulted in maybe a mini diatribe or two, but not so much, because, for good or not, I’d come to a place of acceptance. This is the boxing BUSINESS, as much or more now than ever before, and decisions about what fights are made come about by and large factoring in whether it’s good for business. That just about always means making money, but also it has meant in the last six or so years especially maintaining stature, retaining options for the company or mogul in power.

We have three big leagues, the Top Rank/ESPN grouping, the PBC grouping, and the DAZN/Matchroom brigade. And the persons who steer those ships most of the time are making moves based on what benefits those entities. It so happens that while these leagues have formed, the capital infusion from investors/backers/platform providers has been considerable. So, if the “three leagues” construct hasn’t been a great benefit to the fans, it has been a net plus for the fighters.

If you are Errol Spence, and part of you truly does want to see who is king of the hill, you or Terence Crawford, at welterweight, how much convincing do you need to hear to acquiesce to the plan which has you staying in league, and fighting people other than Crawford? A Shawn Porter or a Danny Garcia fight comes with less risk attached than a Crawford battle, and if the payday is more than healthy, then why not listen to the wisdom of the mogul who explains the sound reasoning why this career pathway is optimal?

I could argue that there is still time to change course, that if these powers that be, the Haymons, the Arums, the Hearns, etc decided to allow and pursue a buffet of inter-league battles, then we fans could still enjoy a welterweight showdown between two superb practioners at their peak. But unless that fight gets booked today, then the sell by date is Sept. 28, when the Nebraska-based pugilist Crawford turns 34 years old. It’s likely that we’ve seen the very best of Terence Crawford already, and that his physical peak is near finished. Spence is 31, and now, after having more time to rehabilitate and build back up after his October 2019 car crash from hell, he may be at his physical peak. He’s said that Manny Pacquiao will have to contend with peak Spence, all the way back from his car flip, when they fight Aug. 21 in Las Vegas. That’s a fine fight, intriguing and certain to perform well from a sales perspective, but no, it’s not the union that I crave, and you crave. And we may as well wrap our brains around the fact that THAT union will never come to be. You might get a variation of it, but you’re gonna get Liz Taylor and Larry Fortensky, not Liz and Eddie Fisher.

And only time will tell how much these fighters who haven’t been placed in inter-league matches, or demanded those clashes get made, when a rival presented themself, and a faceoff to decide supremacy could have been fashioned, look back with regret. Maybe not at all….

But I tend to think that while business practices have changed in boxing in the last six or so years, human nature hasn’t. Terence Crawford isn’t shy about telling us he wants to know, he wants to toe the line against Spence to see who is THE BEST of this era. Will Jermall and Jermell Charlo—they turned 31 on May 19—be left wondering what might have been if when they were 27, 28, 29, 30 years old they’d been placed in with the Canelos, Andrades, Golovkins, et all?

There’s still time to change course for those young gunners at 135 and thereabouts. Gervonta Davis is 26, he turns 27 on November 7. Teofimo Lopez is 23, he turns 24 on July 30. Devin Haney is 22, he turns 23 on November 17. And Ryan Garcia is 22, he turns 23 on August 8. Of those four talented athletes—oh, yeah, no, I’m not going to call them “the Four Princes,” in homage to “the Four Kings” that were Roberto Duran, Ray Leonard, Tommy Hearns and Marvin Hagler, it’s not fair to the old guard—only Teofimo has matched his ambitions and confidence with matchmaking, and taken on a career definer step up scrap. But if a few years pass, and Gervonta has kept on ascending weight classes and that’s rendered a battle against one of the other studs who haven’t followed him up the ladder impossible, then he will be looking back and wondering what if, maybe. Again, only he can say.

The issue is more complex than I’ve laid out. Other factors play in; fighters are armed with more information about how their participation in combat sports may affect them down the line, and many are being more judicious about the amount of risk they take on. The days of guys fighting Bigfoot, King Kong, followed by Godzilla are much more the exception, not the norm. And that’s a good thing, for those individuals, neorologically speaking, if not so much for the people who enjoy seeing the titans of pugilism throw down and show the world who the master of that domain is.

Meanwhile….In a few hours, Floyd Mayweather, who is 44, and turns 45 on February 24, will step into a ring, in Miami, and fight. 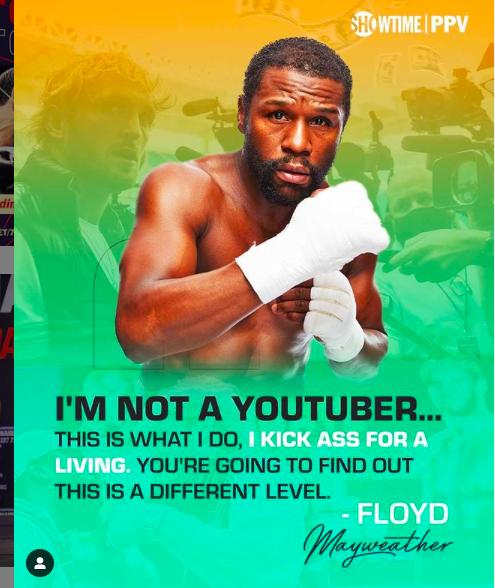 He will face a 26 year old man named Logan Paul, who was best known for pushing buttons with video blogs placed on YouTube, some tasteless, some merely provocative, most all of them ultimately dispensable.

Paul has a brother, two years younger, Jake Paul, who is also a v-logger turned boxer, and most figure Mayweather will take out the older Paul, and then put together a bout against the stronger and more talented younger brother, before the end of the year.

Many of you reading this swear you won’t watch, that this pay per view offering is beneath you.

Some of you told me so when I did the Buzz Check this morning:

Maybe more young eyeballs will come to the sport, and stick around after getting a taste of this novelty fare. Or maybe not, and the rise of “sideshow” bouts should be a warning bell for the industry as a whole.

But plenty of you who announced your vehement distaste will tune in. I will, I am curious to see how this thing is booked. But, I’m still trying to sort out my thoughts on the issue. Should I applaud myself, for being accepting of a reality that I cannot influence? Or should I be saddened, because I’m in a place of resignation? Some of you know that snippet from the author Henry David Thoreau:

“The mass of men lead lives of quiet desperation. What is called resignation is confirmed desperation.”

It’s a mix, maybe. Part of me knows that it’s not a good look to be the vet who rails against the present day product, and engages in too much wistful nostalgia, about “the good old days.” So, I will watch the Mayweather v Logan Paul match. I’ll watch with an “it is what it is” mindset, while holding onto the belief that we wouldn’t be as likely to see You Tubers hoovering up the oxygen that “real boxers” deserve to be inhaling if walls came down, these league leaders came together, and worked on making marquee matchups that feature the best fighting the best, in their athletic primes.