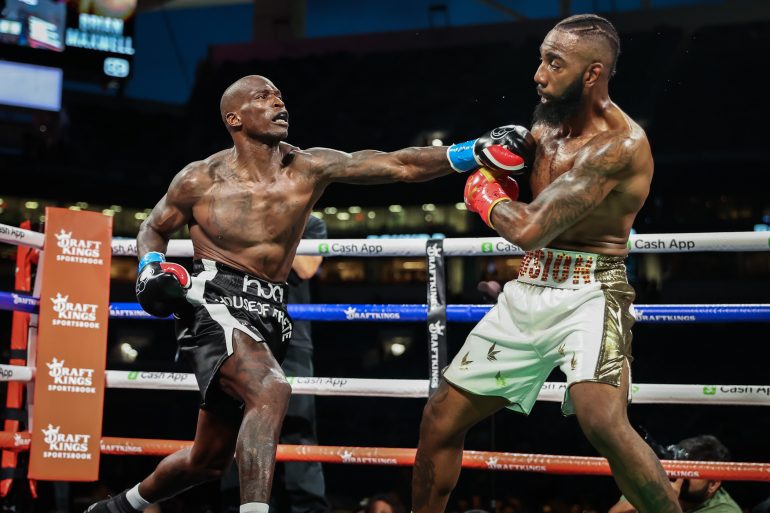 MIAMI — Chad Johnson may have entered with the star power, but there are no penalties for roughing the receiver in boxing.

The former NFL star, better known as Chad Ochocinco, tasted canvas in the fourth and final round of his exhibition match Sunday against Brian Maxwell, but rose up in time to finish the show at Hard Rock Stadium.

The bout, scheduled for four, two-minute rounds, did not count as a pro bout, which explains why Maxwell touched gloves and exchanged pitty-pat blows until the final bell.

Johnson, 43, had looked athletic, if uncoordinated at times during the bout against Maxwell, who brought an undistinguished background in pro boxing, mixed martial arts and bareknuckle boxing.

Johnson was outweighed by four pounds – 179.5 pounds to 183.5 for Maxwell – at Saturday’s weigh-in, but he had a significant reach and height advantage that showed up whenever the two lefties exchanged jabs.

Johnson opened the bout with a right hook that got Maxwell’s attention but there were few meaningful punches until Johnson’s missed right hook left him wide open for one from Maxwell.

Afterwards, Johnson said he had checked boxing off of his bucket list.

“I don’t box. I fight but it ain’t in the ring. So of course I’m a little sloppy,” said Johnson, who trained two months for the exhibition.

Even with the knockdown, Johnson says he sent the message he came to send.

Boxing isn’t the only sport that Johnson had tried to moonlight in. Johnson made nine appearances for semi-pro soccer team Boca Raton FC in the National Premier Soccer League Boca Raton FC during the 2018 and 2019 seasons.

The bout opened up the Showtime pay-per-view card that is headlined by the Floyd Mayweather Jr. vs. Logan Paul exhibition match.