The doctor is in: Devar Ferhadi balances medicine with mayhem 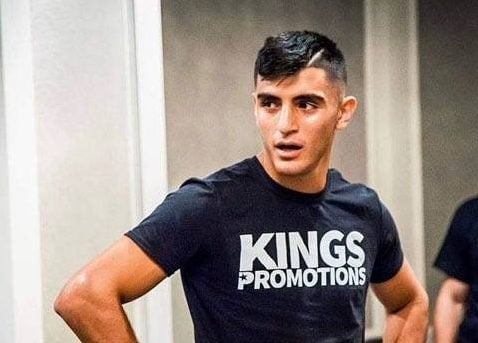 PHILADELPHIA, Pa. – Devar Ferhadi has the time ticking in his head. It’s a precious phase, because the undefeated 26-year-old super middleweight from Frederick, Maryland, by way of Iraq, knows this passion is all coming to an end.

It may come later this year, early next year, maybe the middle of 2022. Who knows?

Over a decade ago, Ferhadi was a self-conscious chubby 14-year-old in 2009 who had a habit of not walking away when other kids taunted him. His father brought him to Maryland police officer Jason Boyer, and his gym, the Frederick Fight Club. What began as something to get Ferhadi in shape and used as a preventative measure to defend himself turned into a foundation.

Boxing instilled a confidence that Ferhadi may not have received in another endeavor. It filled a void that was not there before. Ferhadi transformed from a bullied kid to a bonafide bad-ass with a brain.

Ferhadi found out quickly he was very good at boxing. He also had another major calling—medicine. When he was 19, he went to medical school in Iraq, where he is a certified doctor, after graduating Hawler Medical University in Erbil, Iraq, in 2019. He is now taking steps towards becoming a three-year medical resident, already passing the first test in that process.

He loves boxing. He loves being a doctor. You don’t have to guess where his future lies. It’s why the talented Ferhadi is on a time schedule. He’s 9-0, with 7 knockouts after going 8 rounds for the first time Saturday night after a decision victory over a tough Blake Mansfield at the 2300 Arena in Philadelphia on a Marshall Kauffman show. 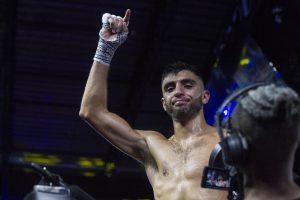 Devar Ferhadi is a doctor who balances boxing with his medical future (Photo by Darryl Cobb).

When his medical residency begins, boxing will have to give way. Though, you get the sense talking to Ferhadi, being around him, that boxing will always be a major part of his life.

“I’ll definitely be going to a gym and working out whether I’ll be competing or not,” said Ferhadi, who is leaning to practice emergency medicine. “Boxing has helped me in so many ways, not just with self-confidence but in the importance to realize the heights that you can reach. You do a disservice to yourself not realizing the heights that you can reach—not just in boxing, but physically in general and mentally in overcoming adversity in becoming a more resilient person.

“It becomes harder, little by little, as you get older to sort of delineate the lessons you have to learn by actually competing. Can I take these lessons away and grow from them in a healthy sense? It’s natural for any boxer, and I don’t care who they are, their most consistent thoughts are obtaining success and how they attain that success.

“In boxing, the ones who succeed the most are the ones without any other options and there is value in that. With no options, you realize there is no room for error and it’s why they push full steam ahead. I realize any fight could my last, but the way I see that, every fight is very dangerous but I am on a clock. I know this will come to an end, because of the other part of my life.” 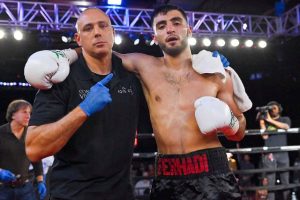 Ferhadi’s second medical certification test is in September and he will have another 18 months to decide where his medical career will be heading. Since Devar left to go to medical school in Iraq, Boyer and Ferhadi had a full training camp for the first time in six years together for the Mansfield fight.

Boyer and Ferhadi would fly back and forth to train in two-week intervals, and sometimes Boyer would be forced to train Ferhadi over the phone. Ferhadi maintained his undefeated while going to medical school in Iraq.

Ferhadi, who is one of five, doesn’t think he had more than three months training with Boyer since he was 19. Ferhadi would find a gym in Kurdistan, Iraq, and correspond with Boyer. It was chaotic though it worked.

The results are an 9-0 record, with Ferhadi setting his sights on a WBC Asian super middleweight title. That may take some time to achieve, but he is a fundamentally sound pressure fighter, who keeps his hands high to protect that golden gem of a brain and mixes his punches well, able to go to the body and the head. Against Mansfield, Ferhadi had one lapse where he was too relaxed, taking a combination that backed him into a corner.

Otherwise, Dr. Ferhadi worked with scalpel precision and banged the rust off an 18-month layoff.

“I’m not particularly satisfied,” Ferhadi said. “I know the goal is always to win, but I had envisioned a knockout, even though I know we’re not supposed to. I kind of pride myself winning through knockouts. I did hurt my (right) arm a little bit in the fifth or sixth round with a right hook, and I had the same injury before, when you hit and the arm kind of dies.

“Mansfield was tough. I hit him with lefts to the body, and I jammed my elbow with the rights to the body. He was trying to take me into deep water, and it is the first time I went eight rounds. I knew he was hurt, but I kept telling myself, ‘Don’t gas yourself out here.’ He tried to jump back on me after I hurt him a couple of times.”

Ferhadi will get back into the gym when his right arm heals, and with his September medical exam coming up, he is looking for another fight before the end of 2021. He is very open at committing to the WBC Asian title, because of his Iraqi heritage.

“There are a couple of fights I would need to get under my belt first,” Ferhadi said. “I am Iraqi and I am Kurdish and that would be very important to me.”

Two promising fighters appeared on the six-bout card. Junior welterweight Quadir Albright, 21, made his pro debut by stopping Isaac Hayne in one, junior middleweight Joe Jackson, a ShoBox alum, knocked out Terrance Williams in one and Andrew Rodgers pulled off an upset by knocking Greg Outlaw from the undefeated ranks.