Nonito Donaire wins a weighty proposition to the Hall of Fame 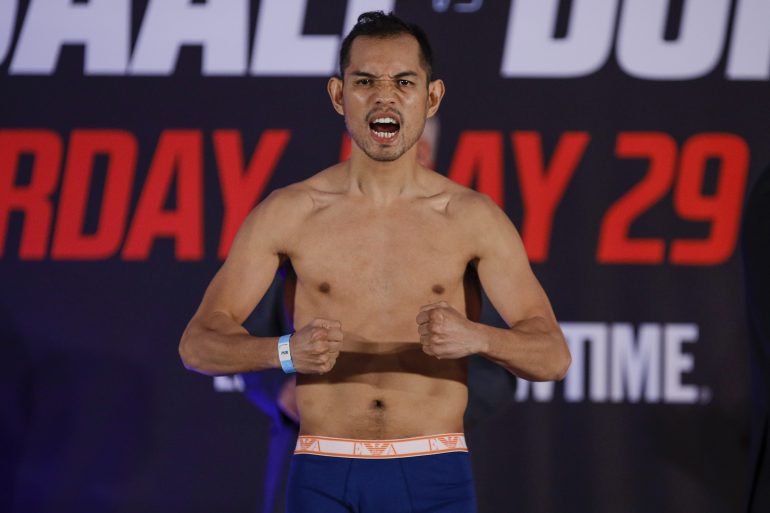 Nonito Donaire has been a top-rated fighter from flyweight to featherweight, winning nine major world titles in four weight classes, during his 21-year pro career.
04
Jun
by Joseph Santoliquito

Nonito Donaire looked down, grabbed his stomach with both hands and belted out the laugh of a jolly, plump man. He was carrying about 147 pounds—the most he’s ever weighed in his life. “The Filipino Flash” had turned into “Filipino Fats.”

The future Hall of Famer was losing the tradeoff game. Ice cream, doughnuts, pizza, tacos, whatever he could grab, he ate, especially rice. He ate, blew up, then he would work his ass off to lose the weight. He was always blessed with an incredible metabolism. Though as he got older, losing the pounds became harder.

Now, over the last six years, Donaire doesn’t have to kill himself to make 118 pounds. He’s proven he could lose the weight and still be formidable, which manifested itself in his fourth-round knockout victory over Nordine Oubaali on Saturday to win the WBC bantamweight belt and become the oldest bantamweight titlist in history.

Donaire (41-6, 27 knockouts) has remained remarkably consistent from flyweight to featherweight over the last 20 years. It’s been truly uncanny to fight in those lighter weights and still be great. 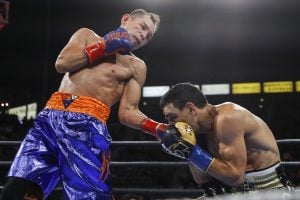 “That’s because I’m not killing myself anymore,” Donaire said. “I’m comfortable and I’m similar to everyone else, not too small and too large. There was a time that I was just too big, right after beating (Vic) Darchinyan (for the IBF flyweight title) in July 2007, I really blew up.

“I got up to 147 pounds. I went from a flyweight to a welterweight, because I ate everything. It was 14 years ago, I know, but there was a lot of crap in my body that didn’t need to be there. What helped me a lot was the World Boxing Super Series. I had to maintain 118 for a while. It became a lifestyle—a habit.

“I’ll tell you, I felt great before the Oubaali fight, because my joints didn’t ache, like they usually do when I drop weight. I’ll walk around at about 130, maybe 132.

“Yeah, I was ‘Filipino Fats’ (laughs). No way was I ever going to get that big again between fights like I did after the Darchinyan fight.”

For many of his early years, Donaire’s training camps were dedicated on losing weight than putting in a game plan. Being a fighter, Donaire admits, he was hard headed.

He began listening more to his body—and to his wife, Rachel.
He began following her lead in eating healthier. He feels more energetic. He’s also began to train all year round.

“I saw old-school things from Nonito early on, and what I mean is he would go to camp for eight weeks, and like any boxer does, they would wait for the eight weeks to do anything and wouldn’t do anything before those eight weeks,” recalled Rachel, a fourth-degree taekwondo black belt champion. “I mean quite literally, the countdown began when he stepped into the gym. He would blow up between fights, and he didn’t work on strengthening his body. He would do long-distance running, and it would drive me crazy.

“You would see the weight blow up before training camp, the weight cutting during training camp and the dehydration. He wouldn’t train to strengthen his body, and you’re dealing with malnutrition and you’re trying to make weight, while putting a game plan together and you’re sparring trying not to get hit too much.”

Rachel felt the distance running was melting him. Nonito and Rachel admit that Nonito was his own worst enemy for a time. The two would argue about running and training. Nonito wanted to stay with the old-school ways, while Rachel wanted him to use more practical training.

“I used to tell Nonito that he’s not a marathon runner, he’s a fighter who needs stamina for three minutes at a time,” she said. “I questioned why. So, we changed in doing sprint stamina, working on fast-twitch muscles. He would tell me I don’t understand. I would tell him that I do. I would see all of these boxers and how skinny their legs are.

“Legs are a fighter’s foundation. What is amazing is Nonito was still winning. He has made a great transformation. I won the argument. He’s on a better diet. He had to change his lifestyle and was willing to do it. When the boys were born, we started to eat more of a restricted diet with a specific food each day.

“It forced Nonito to begin eating right. It also forced him not to stuff himself. He grew up poor, when he didn’t know where his next meal would come from. He had to overcome that past trauma.

“The biggest obstacle was getting him away from Filipino food—mainly rice. That was the most difficult, because if it were up to Nonito, he would eat rice for breakfast, lunch and dinner.”

Right now, the way Nonito looks, he could beat anyone at 118 pounds. His discipline is there. His year-round training is there and his boxing ability has always been there, now with the addition of Rachel playing a larger role.

“I think with everything that happened to Nonito, around 2012, he didn’t want to fight anymore,” Rachel remembered. “He used to hate going to the gym, he hated waking up in the morning and going to the gym. I asked him why he loved boxing.”

In 2012, when Nonito was the BWAA’s Fighter of the Year, he admits that he had to figure that question out.

“To me, there was no more purpose, because I felt I did everything after the (Toshiaki) Nishioka fight,” Nonito said. “I was offered a big purse and I took the fight against (Jorge) Arce and I won, but I felt so horrible after that fight. I was given a lucrative offer against (Guillermo) Rigondeaux and I took that fight. I began to realize something: I love boxing.

“I had to find that drive and establish good habits and it’s why you saw ups and downs in my career after that. I had to relearn to be excited again. The Inoue fight brought all of that passion back again. Now against Oubaali, I’m that fighter again.”

After this rebirth, one day, seemingly in the distant future, Nonito will be standing in Canastota, New York, getting ready to be inducted into the International Boxing Hall of Fame.

He’ll do it as “The Filipino Flash,” not as “Filipino Fats.”