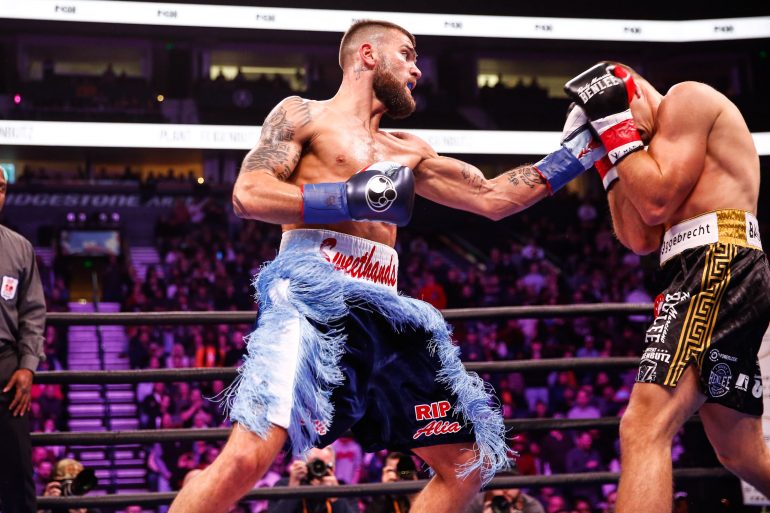 LAS VEGAS — Caleb Plant will get paid handsomely if he faces superstar Canelo Alvarez in September. Mexico’s Alvarez is the WBO, WBA, WBC, and Ring Magazine champion at 168 pounds. But Plant holds the missing piece to the undisputed puzzle, the IBF belt.

“That [$10 million] number sounds right, or somewhere around there,” Plant told Seconds Out. “I’m not looking to price myself out of a fight that I want and a fight that I know in my heart that I can win. But I also don’t want to get anything less than what I would be owed.

“When it comes to fighting here over in America, I don’t have a bigger fan base than Canelo does, but I have a bigger fan base over here than Callum Smith and Billy Joe Saunders do, and I bring a lot more views than Callum and Billy do,” he continued. “I have a great team around me. I don’t think there is any better manager than Al Haymon. We’re going to sit down here real soon and get things worked out.”

While Hearn wouldn’t comment on the specific number, he did imply that Plant has a great shot of making a small fortune.

“He is part of the making of an undisputed fight so he has great leverage,” he told The Ring. “He’s a good fighter; he deserves to be paid very well for this fight. I’m sure he will be.

“Hopefully it’s about more than just money. Hopefully he believes he can win and become undisputed.”

Hearn told reporters last week that all signs point toward a potential date of Sept. 11 for Canelo-Plant. However, Sept. 18 is also a possibility.

The 41-year-old Hearn also addressed a question from The Ring regarding Plant’s $10 million remark.

Former two-division titlist Billy Joe Saunders, who was stopped by Alvarez on May 8 before a U.S. indoor boxing record of 73,126 at AT&T Stadium in Arlington, Texas, pocketed $8 million. However, Sergey Kovalev and Daniel Jacobs each secured $12 million.

“It was bit of a different world then,” Hearn said referring to Kovalev and Jacobs.

Plant, 28, who won the IBF title with a 12-round unanimous decision victory over former champion Jose Uzcategui, has been fighting exclusively on PBC on FOX.

Hearn is aiming for a cross-platform fight, which could be a huge victory for the sport. After two such fights in half a decade cross-platform bouts in consecutive years would be approaching groundbreaking territory.

“We want to put [Canelo vs. Plant] on DAZN. And DAZN would put up a hell of a lot of money for that fight.”

But Hearn also admitted there could be some barriers to getting the fight made.

“If Haymon tells Plant, ‘You can only do this fight on FOX’ and the offer’s not right, I don’t know what happens then.

“But hopefully we can just get together. If Caleb Plant wants the fight, which I presume he does. [It is] a huge opportunity for him financially and in terms of legacy.”