The Smith camp is weighing an offer made by Jacobs promoter Eddie Hearn of Matchroom Boxing for the fight, which would take place in the fall in New York City.

“I think it was a great offer that Eddie made. It’s multiple times more than Joe Smith has ever made in his life, so I think it was a strong offer,” Keith Connolly, Jacobs’ manager, told The Ring on Tuesday, although he declined to specify the amount of the offer. “It’ll be the biggest fight between New Yorkers in New York in a long time. I think Barclays Center and Madison Square Garden would be really interested in the fight. It would be a huge fight for New York and for boxing.”

Smith promoter Joe DeGuardia of Star Boxing confirmed that Hearn has made the offer to Top Rank, which co-promotes Smith, and that he and Smith are interested in the bout.

“I’m interested in a few fights out there for Joe, but a fight with Danny Jacobs would be interesting and fan friendly,” DeGuardia said. “Any fight Joe Smith is in is a fan friendly fight. Obviously, I’m looking for the best total circumstances for Joe and me, so really the question for us is what’s the best scenario? There are a lot of factors. We’re going through them and sitting down with Joe and with (Top Rank chairman) Bob (Arum) and when all is said and done we will collectively decide which way we are going to go.” 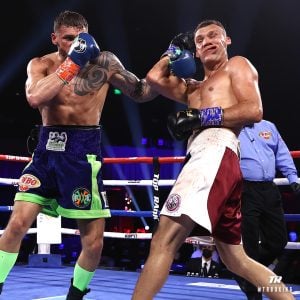 The 31-year-old Smith (27-3, 21 KOs), a popular draw from Mastic on New York’s Long Island, won a hard-fought and extremely competitive fight against Russia’s Maxim Vlasov to claim the vacant WBO 175-pound title that had been vacated by Canelo Alvarez. Smith dug deep and swept the final two rounds on all three scorecards to secure a dramatic, majority decision victory by scores of 115-113, 115-112 and 114-114.

Going into the fight, Top Rank and DeGuardia were making plans for Smith, if he won, to face WBC/IBF titleholder Artur Beterbiev (16-0, 16 KOs) in a three-belt unification fight in the fall. It is a fight that Smith and Beterbiev, who is also with Top Rank, both said they wanted.

The Montreal-based Russian Beterbiev knocked out Adam Deines in the 10th round of a mandatory defense on March 20 in Moscow to clear his hurdle into the fight. He said going into the fight with Deines and afterward that he hoped to meet the Smith-Vlasov winner next to further unify titles.

But with the unexpected offer coming from Hearn for Smith to defend against Jacobs that plan could certainly change.

“Joe against Beterbiev or against Danny is a big fight in New York but the fight with Danny is probably a bigger event,” DeGuardia said. “I like both fights for Joe. From Danny’s perspective I understand it; I understand where their side is coming from because it’s a big fight, a big New York fight and a chance for Danny to win another title. From our perspective I have to evaluate a lot of things that are available.”

Top Rank would also have to sign off any Smith fight. Top Rank has one bout remaining on its option agreement with Smith and DeGuardia.

Connolly said he hopes they can get a deal done.

“This is sort of a unique situation where we know it would be a big New York fight and a chance for Danny to win a world title in a second weight class,” Connolly said. “If it wasn’t a fight with somebody else from New York it wouldn’t be something we would be proposing. But I sat down with Danny and we thought it was a huge event for New York. I brought up the idea to him and he loved it. Then I brought it up to Eddie and he loved the idea.

“And Eddie didn’t make a lowball offer. We went in with a good offer right off the bat because it’s a fight we really want to make. Joe (DeGuardia) is talking to Top Rank about it. I’d be happy to talk to Top Rank as well.” 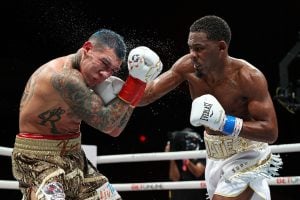 Jacobs (37-3, 30 KOs), 34, of Brooklyn, New York, would move up in weight for the fight. He lost his middleweight world title by unanimous decision to Alvarez in their May 2019 unification bout, after which Jacobs moved up to super middleweight, where he has won two fights in a row. He made Julio Cesar Chavez Jr. quit after the fifth round in December 2019 and then won a split decision over Gabriel Rosado this past November.

Hearn’s offer would be for the fight to take place on his broadcast partner, which is DAZN. But Connolly said their side would have no problem doing the fight on ESPN, where Top Rank has an exclusive deal.

“If Top Rank made a respectable offer to Danny we’d be willing to do the fight on ESPN as well,” Connolly said. “We’re more than willing to go fight on ESPN. There are no barriers to making the fight on our end. I’ve heard Joe Smith loves the fight and wants to fight Danny and has to talk to Joe DeGuardia and Top Rank. I know Danny would love to fight Joe Smith.

“We’re hoping to hear something in the next couple of weeks to see if we can get this fight done. I don’t think it’s a complicated deal to make.”