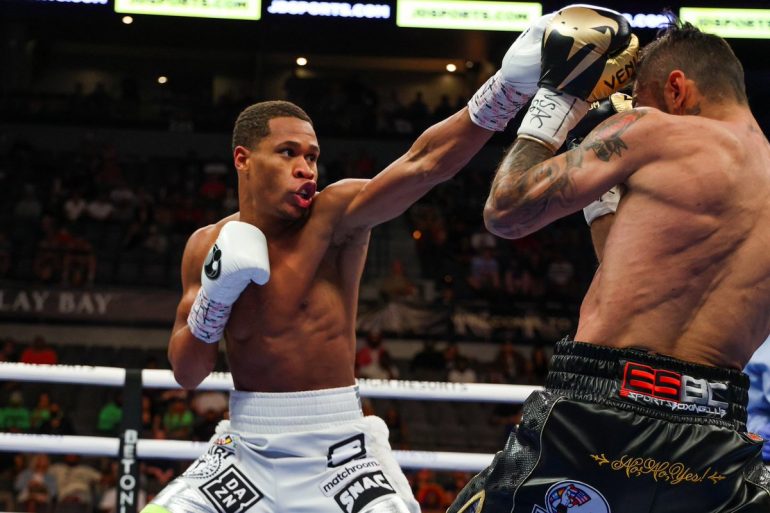 Haney (left) last time out against Jorge Linares. Photo courtesy of @DAZNBoxing
31
May
by Ryan O'Hara

LAS VEGAS — Devin Haney overcame adversity in the 10th round of his lightweight title defense against Jorge Linares to become the first fighter to beat the Japan-based Venezuelan on points.

Coming into the fight, all five of Linares’ defeats had come by way of stoppage. But as the saying goes, there’s a first time for everything.

Haney (26-0, 15 KOs), who defended his belt for the third time, outboxed the former three-division world champion throughout the first half of the fight.

But at the end of round 10, Linares drilled Haney with a right-left combination that forced him to do the stanky leg to his corner. However, he wisely held for much of the 11th round and eventually got his legs back underneath him to escape with the unanimous decision victory.

“It was either Linares was winning the fight and [they knocked him out] because they had to knock him out, or they just caught him with a big shot, like [Pablo Cesar] Cano did and put the pressure on him.

While Vasiliy Lomachenko rallied to stop Linares in the 10th round of their lightweight world title unification fight in May 2018, the scorecards were close at the time of the stoppage.

Lomachenko, who was dropped in the sixth round by a right hand, was up 86-84 on judge Steve Weisfeld’s scorecard, Linares was up by the identical tally on Robin Taylor’s card, and Julie Lederman had it 85-85.

Haney was elevated from interim WBC champion to full titlist in October 2019, when Lomachenko was awarded “Franchise Champion” status, which allowed the Ukrainian to bypass mandatory obligations.

The 22-year-old also addressed critics who took jabs at him for getting hit with clean shots from a guy that many saw as a faded former world titlist.

“Every guy that knocked him out he probably hurt him besides, I would say Cano. I just think Cano caught him with a good shot early, and he couldn’t [recover] from it.”

“I want to become the real undisputed king of the lightweight division. I want to make the biggest fights happen. This is the first of many, so let’s do it next.”