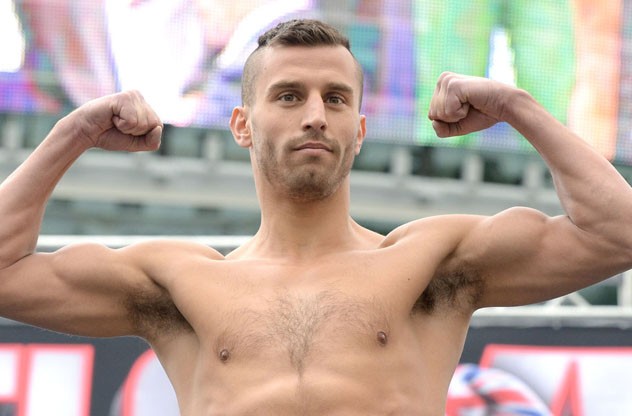 Photo by Naoki Fukuda
31
May
by Anson Wainwright

Lemieux, who is rated No. 7 by The Ring at 168 pounds, intends to put the division on notice with an impressive win over his battle-hardened opponent.

“I’m going to do whatever I need to do to look great and send a message to the super middleweight division.”

The 32-year-old, who had originally been scheduled to fight Ronnie Landaeta on April 17 before visa issues curtailed that fight, is pleased with how training camp has gone in Montreal.

“My preparation went well,” said Lemieux. “I’ve been in the gym for a while. [I’ve] been training really hard, [I’ve] been on a strict diet and been very disciplined in and out of the gym. I’m feeling in very good shape for the fight.”

Lemieux’s motivation was aided by his girlfriend, Jennifer Abel, a three-time Olympic diver.

“Jennifer’s work ethic is admirable and pushes me to make sure I always stay at my best to dominate in my domain, which is the world of boxing,” Lemieux explained.

“It’s much easier being in a relationship with an athlete also who understands the struggles we face, so it’s much easier to deal with certain situations. Yin and Yang; we support each other and form a strong bond. [That] helps in my boxing life.”

Lemieux, who’s coming off a fifth-round stoppage over Francy Ntetu in October, which ended a 10-month hiatus due to COVID-19, has used the downtime to take stock and is looking to push on towards another world title fight.

“The current situation we are facing with the pandemic is part of life,” Lemieux said. “It’s unfortunate but we have to deal with it. There is no giving up, no matter the obstacles in front of us.

“I am focused on my ultimate goal and determined to achieve what I thrive for since I was a child and that’s to be a champion.”

Lemieux’s trainer, Marc Ramsay, feels his fighter is more than capable of making his mark on the super middleweight division.

“Success is directly linked to persistence and hard work,” said Ramsay. “David isn’t the most talented boxer out there, but he’s always been able to rise to the top with hard work, determination and a little bit of power in both hands.

“Over the past year, David has challenged the super middleweight division, and we intend to take all the steps to go back in a world championship fight and achieve our goal of being champion again.”

Lemieux’s promoter, Camille Estephan of Eye of the Tiger Management, is happy to get one of the biggest names in Canada active while waiting for something more significant.

“It’s very important for David to be active, especially now that he has moved up,” acknowledged Estephan. “We would like to see him in a big fight at 168 pounds and we are working towards it.”

That is music to Lemieux’s ears.

“I’ve been targeting Canelo for a long time now,” he said. “Styles make fights, and I think it would be a hell of show versus Canelo.”