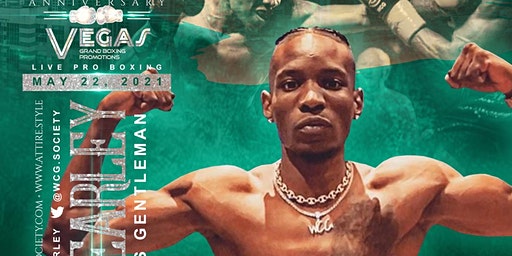 LaVonte Earley
22
May
by Michael Montero

Earley (14-0, 8 knockouts) dropped Ariel Vasquez, of Nicaragua, four times before referee Kenny Chevalier called off the fight at 1:33 of the second round.

“First off, I’d like to thank God,” Earley said in the ring after the bout. “Second, my team, my father, my mother, everybody who helped get me here. This is a dream come true.”

The Charlotte, North Carolina, native dropped Vasquez three times in the opening round. One knockdown came from a left upstairs, another from a left downstairs and the third from a right to the body. In the second round, a crisp left hook to the ribs dropped Vasquez once again, which prompted Chevalier to stop the bout.

Most fighters would celebrate after such a dominant performance but not Earley. He wasn’t satisfied with the amount of work he got from his opponent tonight. So just minutes after climbing out of the ring and taking off his gloves, he and his team headed straight to the gym to get in a workout.

“I’m frustrated because I wanted to get more work tonight, more rounds,” Earley told The Ring. “I mean, I did crack his ribs but I thought he was going to give me a little more work than that. I’m about to go run a few miles, then do some shadow boxing.”

Earley was originally set to face Edward Diaz, of the Dominican Republic, but visa issues prevented him from traveling to the United States. That’s when Vasquez (14-31. 3 KOs), who has now lost six fights in a row, agreed to take the fight on short notice. Earley says it’s been difficult to find opponents willing to face him.

“I found out we had a new opponent five days ago,” he said. “No disrespect but I’m not trying to fight nobody with an upside-down record. Who do I have to pay to get in the ring with me? I’m that good where I can start making some moves now. I’m ready to go. I want the best.”

LaVonte, or “Von” for short, has already fought twice in 2021 and is scheduled to fight three more times by the end of the year. The plan is to stay as busy as possible going forward and ready for whenever a big opportunity may arise.

“I haven’t left camp”, he said. “I just fought in March. I only took a one-week break after that fight. And even that whole week I was out hiking. I’ve basically been in a five-month camp.”

Tonight’s show marked the three-year anniversary for Vegas Grand Boxing Promotions. Earley’s mother, LaVonda Earley Stacey, started up the company in 2018 and has been promoting her son ever since.

The next show is scheduled for July 24, where Earley is set to face Reymond Yanong of the Philippines.