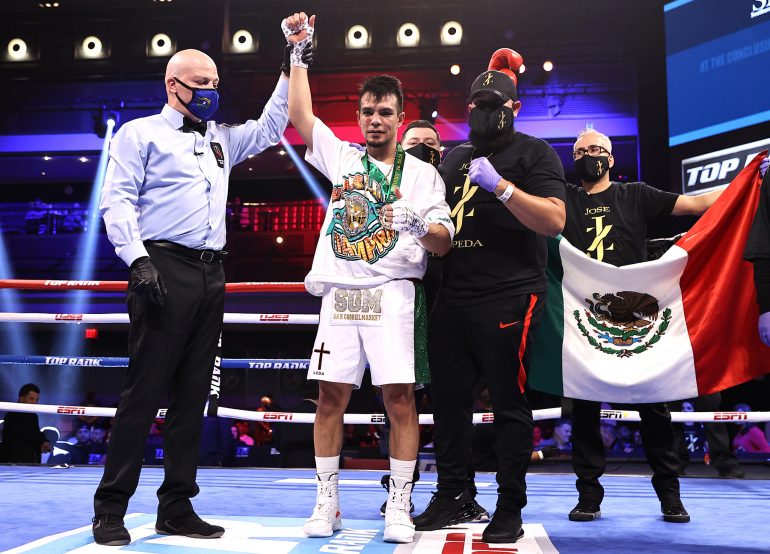 LAS VEGAS, NEVADA - MAY 22: Jose Zepeda is victorious as he defeats Hank Lundy at Virgin Hotels Las Vegas on May 22, 2021 in Las Vegas, Nevada. (Photo by Mikey Williams/Top Rank Inc via Getty Images)
22
May
by Joseph Santoliquito

Jose Zepeda may have spoiled the plans of Jose Ramirez and Josh Taylor, because he could have knocked out the viewing audience by putting them to sleep before the main event Saturday night at Virgin Hotels Las Vegas.

What a difference a fight makes.

The last time Zepeda fought he put on one of the most riveting performances in years. He was knocked down four times—and won. For the first time in seven months, Zepeda, one half of The Ring’s and BWAA’s 2020 Fight of the Year with Ivan Baranchyk, got a bit of a softer touch this time around in shopworn Philadelphia southpaw Hank Lundy.

Zepeda did what he was supposed to do, dispatching Lundy, a late, three-week replacement for the Nevada State Athletic Commission refused Pedro Campa, by a comfortable, though uninspiring 10-round decision in the co-feature of the Ramirez-Taylor 140-pound unification title fight.

It marked the third-straight victory for the junior welterweight southpaw Zepeda (34-2, 26 knockouts), mixed in with a no-contest in May 2019, since he lost his challenge to WBC junior welterweight titlist Jose Ramirez in February 2019. The 37-year-old Lundy (31-9-1, 14 KOs) lost for the third time in his last five fights.

In the third round, Lundy seemed to knockdown Zepeda, but referee Celestino Ruiz called it a slip. Otherwise, Lundy’s legs seemed stiff and he really posed no danger to Zepeda.

But Zepeda may still need time to recover from the Baranchyk fight. He appeared tentative against someone that he should have walked through. Wearing a cut on his right eye, he stayed outside and looked gun shy.

Still, Zepeda was firmly in control.

Southpaw Kenneth Sims Jr. was holding his own in the early portion of his eight-round junior welterweight bout with highly touted Elvis Rodriguez (11-1-1, 10 KOs), en route to a huge upset victory by majority decision.

Sims won on the scorecards of Eric Cheek and Max DeLuca, who rightfully had it 78-74, while judge Chris Migliore somehow saw it 76-76. It was the third-straight victory for Sims (16-2-1, 5 KOs) since losing to Samuel Teah in 2018.

Using combination punching, switching up from left to right, counter punching and landing straight rights and right hooks, Sims appeared to confuse Rodriguez, who when down late fought with no urgency.

“I am excited about that knockout,” Martinez said. “Going into the fight, I was looking for a knockout as he was never stopped in 16 bouts. I did my thing, and I am glad I got him out there. I am getting used to the pro style, and the sky is the limit. I am looking to get back sometime in August.”