Gervonta Davis on Mario Barrios fight: ‘I took this fight because I want to be great’ 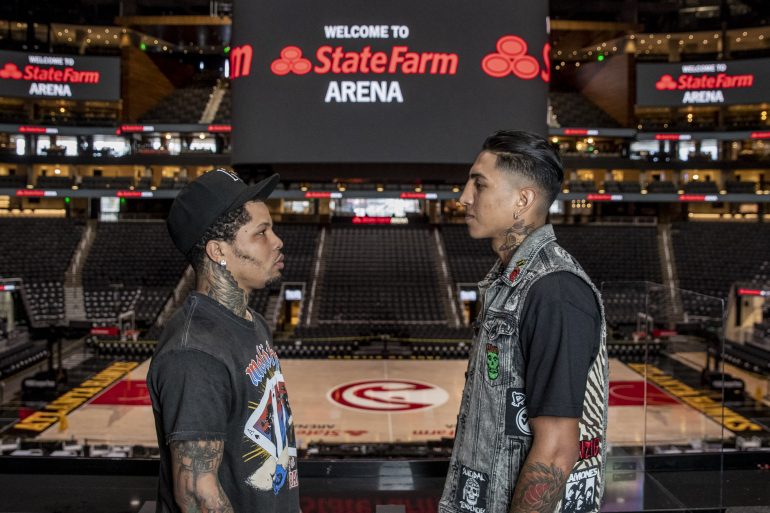 Is Tank Davis avoiding the big fights at 135 by taking on Mario Barrios at 140? Photo by Esther Lin/SHOWTIME
20
May
by Francisco Salazar

Gervonta Davis will move up in weight and square off against junior welterweight Mario Barrios, it was offcially announced by Premier Boxing Champions (PBC).

A press conference was held Thursday.

The 12-round bout will take place at the State Farm Arena in Atlanta, Georgia and will headline a four-bout Showtime pay-per-view telecast (9 p.m. ET/ 6 p.m. PT).

Davis (24-0, 23 knockouts), who is ranked No. 1 by The Ring at 130 pounds, and Barrios will square off in a clash of unbeaten fighters for a secondary world title belt Barrios owns. Davis last fought on October 31, scoring a vicious knockout victory over Leo Santa Cruz in San Antonio, Texas and came came almost a year after Davis dropped Yuriorkis Gamboa three times en route to a knockout victory in round 12. That fight also took place in Atlanta.

The 26-year-old southpaw from Baltimore, Maryland is considered a protege of Floyd Mayweather, who promotes Davis.

Despite run-ins with law enforcement in recent months, including an alleged hit-and-run incident in February in downtown Baltimore, Davis is not overlooking Barrios on a path to facing some of the best fighters at 140 pounds, including the winner of the Josh Taylor-Jose Ramirez unification fight Saturday and Regis Prograis.

“We all have challenges we go through in life, and that’s what makes us strong,” said Davis at Thursday’s press conference. “This is another challenge that I have on my road to success. I’m ready to walk through it and keep pushing.

“I took this fight because I want to be great. All the other big names at lightweight had scheduled fights so I felt like I wanted to go out and best the best fighter out there for me. We know this is a dangerous fight. Barrios is coming with power and you know for sure I’m coming with power. May the best man win.”

Barrios (26-0, 17 KOs), who resides in San Antonio, also fought on the same October 31 card, knocking out Ryan Karl in round 6. The victory over Karl was Barrios’ first fight in September 2019, when he scored a close and disputed victory over Batyr Akhmedov.

Despite being the underdog, Barrios is confident he can pull off the upset win over Davis.

“This is a huge opportunity for me,” said Barrios, who is ranked No. 7 by The Ring at 140 pounds. “’Tank’ called me out. I know he’s trying to do something great, but this is a dangerous fight for him. It’s going to be an action-packed fight. We’ve never faced fighters like each other before. We’re going to see on June 26 if it’s the right move for him.”

In the co-feature, former unified junior middleweight titleholder Jeison Rosario will square off against Erickson Lubin in a compelling 12-round bout.

Rosario (20-2-1, 14 KOs), who is originally from the Dominican Republic and now resides in Miami, Florida, was knocked out by Jermell Charlo in round 8 of his last fight on September 26. Rosario had stopped Julian Williams on January 18 of last year to capture the unified world title belts.

Lubin (23-1, 16 KOs) defeated Terrell Gausha by unanimous decision in his last bout on September 19. The Orlando resident has won his last five bouts since suffering his only loss at the hands of Charlo in October 2017.

Also fighting on the Mayweather Promotions card will be Julian Williams (27-2-1, 16 KOs), who will make his first appearance in the ring since his knockout loss to Rosario. The 31-year-old will face Brian Mendoza (19-1, 13 KOs) of Albuquerque, New Mexico in a 10-round bout. Mendoza scored a close decision victory over Thomas Lamanna in his last bout on August 29.