Chantelle Cameron: I like having a target on my back 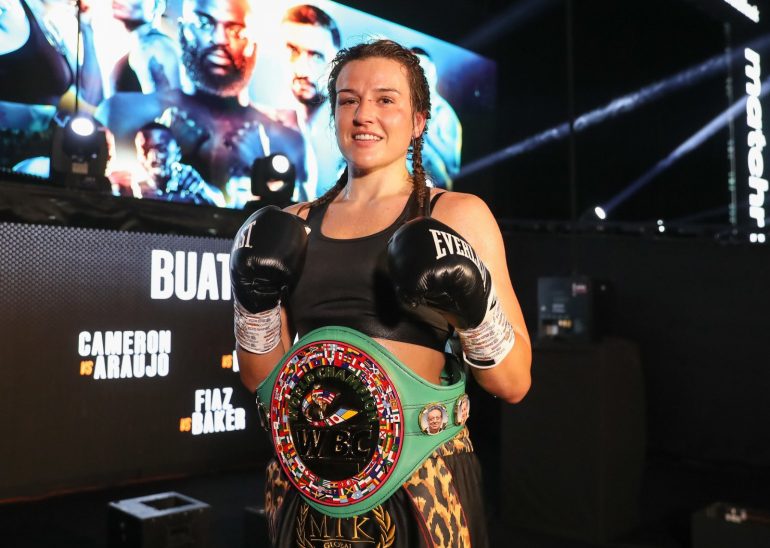 Chantelle Cameron is itching to make the first defense of her WBC World Light-Welterweight title against Michelle Hernandez – and wants to show she will relish being a World ruler on Saturday May 29 at the Michelob ULTRA Arena at Mandalay Bay in Las Vegas, Nevada, live worldwide on DAZN.

Cameron (13-0 7 KOs) landed the vacant WBC strap with a shut-out win over Ariana dos Santos Araujo in Milton Keynes, England in October, but her first defense against Hernandez (23-7-3 7 KOs) proposed for March had to be postponed through an injury to the Briton.

The pair now get it on in front of fans in Las Vegas, and that’s exactly the type of stage that the 30 year old wants to be spotlighted on, and for Cameron, holding the green and gold belt means other fighters are calling her out – and that’s a position she’s delighted to be in.

“I feel good being the target,” said Cameron. “It’s better than doing the chasing, that’s frustrating, you are just trying to get the fights and a title shot, so now I know I am going to get fights because people want my belt.

“Being World champion has not really sunk in yet, and nothing has changed because it’s been so long since I won the fight, and I haven’t been able to defend it yet. So, I don’t think it’ll really feel it will sink in until I win more belts, but I still feel the same, still have the same drive, the same hunger, and now I am a target. I used to have to chase people for fights but now I have the green and gold belt, I am the target.

“The best of me is yet to come, the fight hasn’t come where I get to show that. I boxed to my game plan to win the belt and did what I had to do and what my coaches told me. She is a big puncher so I knew I didn’t want to be taking risks and getting involved with someone that could put me on my backside. When I do get the fight that shows what I can really do, I think people will acknowledge me more.

“Everyone is so desperate to stay undefeated, but this is a sport, we all have to climb the ladder and if you are that good, then boxing anyone – that’s my mentality. If I become undisputed and someone is calling me out and they’ve proved themselves, let’s take the fight.”

There’s a professional debut on the card for Eddie Hearn’s latest American signing, Khalil Coe, Reshat Mati (9-0 7 KOs) enters double figures in the pro game on the night, Ramla Ali (2-0) has been impressive in her two fights since turning pro in October and the first pro female fighter from Somalia gets an introduction to American fight fans on the bill, a card that is rounded off by Devin Haney Promotions’ Darren Cunningham (13-0 7 KOs) continuing his pro rise.

TICKETS ARE ON SALE NOW AT AXS.COM