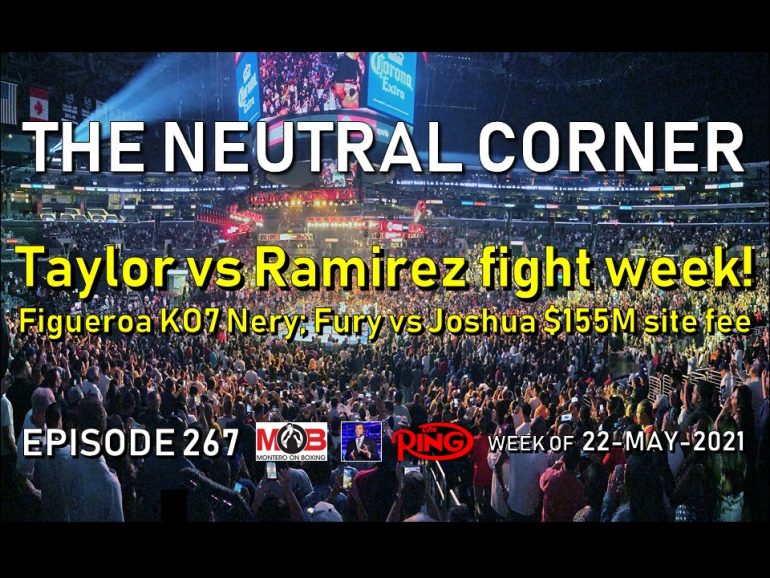 18
May
by Michael Montero

On episode 267 of The Neutral Corner boxing podcast, host Michael Montero opined on the latest breaking news in the heavyweight division.

An arbitrator, Judge Daniel Weinstein, has ruled that Tyson Fury must face Deontay Wilder for the third time by September 15. This ruling essentially blows up the potential super fight between Ring/WBC champion Fury and unified WBA/WBO/IBF champion Anthony Joshua. A fight between them, which would completely unify the heavyweight division for the first time in the four-belt era, was nearly done for August 14 in Saudi Arabia.

Montero contends that a third fight between Fury and Wilder holds up progress in the heavyweight division. Most fans and media feel “The Gypsy King” won their first bout in 2018, which ended in a highly disputed split draw. Fury left no doubt in the rematch last February, dropping Wilder twice before his corner threw in the towel in the seventh round. That fight drew around 800,000 PPV buys. It’s highly doubtful that a third bout this fall would generate anywhere near that amount of business.

What remains to be seen is whether Top Rank, who promotes Fury in the United States, can offer Wilder “step aside” money, allowing the Fury vs Joshua fight to take place, with Wilder facing the winner next.

There were two cards of note last Saturday May 15. In the UK, undefeated light heavyweight prospect Joshua Buatsi improved to 14-0 (12 knockouts) with a TKO4 win over Daniel Dos Santos, who suffered his first loss as a pro. The fight headlined a Matchroom Boxing show on DAZN.

In Carson, California (just south of Los Angeles), TGB Promotions put on a PBC card that was broadcast on Showtime. Undefeated junior lightweight prospect Xavier Martinez and former junior featherweight titleholder scored unanimous decision wins on the undercard. The main event between Brandon Figueroa and Luis Nery was an entertaining one. After a quick start, Nery began slowing down in the middle rounds. Figueroa dropped him in the seventh round with a vicious body shot. The Mexican native was counted out and suffered his first loss as a pro.

“Maybe they can add stipulations in fight contracts going forward,” Andrew said. “Where it a fight ends in a knockout, or really wide on the cards, the Rematch Clause is null and void because it’s not really necessary.”

“If the third Fury vs Wilder fight happens and Wilder wins, that means the Fury vs Joshua fight never happens,” said John from Australia. “That’s a really big deal. I can’t believe this arbitration ruling, this is a massive bummer.”

“I’m going crazy with this arbitration news,” said Thad. “You can never underestimate Al Haymon, this guy always seems to get his way. If I’m Tyson Fury, I just ignore the ruling and fight Anthony Joshua.”

“Taylor vs Ramirez is a fantastic matchup,” said Rich. “I see it as a 50/50 fight. I’m leaning toward Ramirez by split decision, but it really could go either way.”

“From a UK boxing fan’s point of view, it’s absolutely disgraceful that no UK broadcaster has picked up the Taylor vs Ramirez fight,” said Nigel. “Not Sky Sports, not BT Sport, not even Channel 5. It’s really pissed me off.”

“It’s hard to feel bad for the parties involved in the Fury vs Joshua fight”, said Hamed. “They’ve been going on and on about the fight being done, but it wasn’t. I was getting bored of the whole thing. I don’t really want to see the third Fury vs Wilder fight, but I can’t blame Wilder for wanting it.”