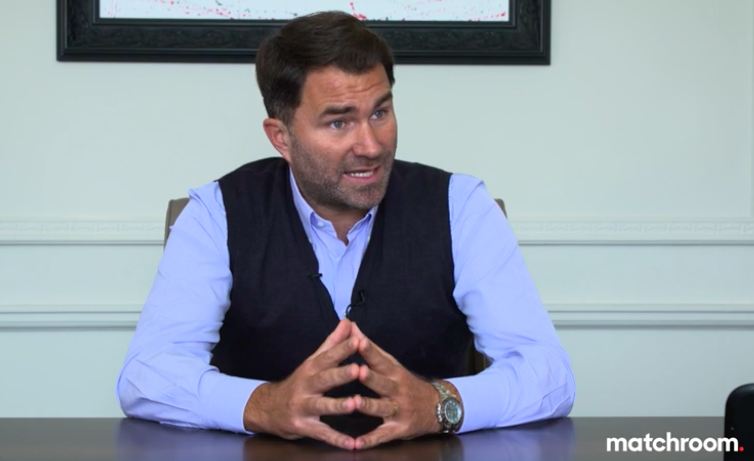 18
May
by Michael Woods

Promoter Eddie Hearn weighed in from England on the news that an arbitrator ruled heavyweight Tyson Fury should fight Deontay Wilder in a third contest between the two, by Sept. 15.

The Brit deal-maker said that he was settling in for a chill Monday night, when his phone started blowing up. In a video hit posted to YouTube, the Englishman said that Fury’s promoter in America, Bob Arum, called him and told him that yes indeed, the arbitrator had ruled.

Arum, in a Monday afternoon chat with ESPN, indicated that he’d be inclined to listen to the arbitrator, and that he thinks Fury will fight Wilder next, maybe in July, maybe in Las Vegas.

“It was a shock to the system,” Hearn said on the YouTube hit. He said it seemed to him like Arum was genuinely shocked, and he’s actually still hoping that Fury meets Anthony Joshua in Saudi Arabia on Aug. 14. “I’m hopeful,” he said, noting that the AJ side had been assured that the arbitration matter wouldn’t impact the planning for the most massive fight involving two Brits that boxing has ever seen.

Joshua took the news in stride, Hearn said, and he told the promoter he’d be in the gym, staying in work mode. “Another day of ups and downs, this is called the boxing busines, like I said, it can give you the highest highs, and it can kick you right in the nuts, on other occasions. But we’re here, we’re breathing, AJ is still the champion,” said the 41 year old businessman. “We know what we wanna do, we wanna win the undisputed champion, we wanna fight Tyson Fury, but if his hands are tied, we have to look elsewhere.”

Yes, he will be shifting some attention to Plan B. “And probably a Plan C, as well,” he continued. “The one that springs to mind immediately is the WBA mandatory, Oleksandr Usyk. They’ve been quite patient, and I think really, if Team Fury don’t get themselves together, don’t get their act together, by the end of this week, we will have no alternative but to look for an alternative fight.” He didn’t get pissy and whine about how much time has been lost, while he sought to lock down a site and a site fee, and shared that he’s keeping a door open mentally to maybe have AJ fight in December, against the winner of Fury-Wilder 3.

Hearn reiterated that he wants to get to decision time “by the end of this week” to know if we the people see Fury v AJ next, or Fury v Wilder again, with AJ v Usyk being the next task for the muscled Brit and the Ukrainian ex cruiser standout.

My Three Cents: The road to Fury vs. Joshua has been winding, to put it mildly. Before we fixated on the matter of the Brit v Brit showdown getting off the ground, we’d invested interest in a plan, or stated desire, to get a Deontay Wilder v Anthony Joshua fight made. Remember how the flirting reached a peak in March 2018, and heated back up in February 2019? It got a bit silly and lightly ugly at times, with back and forth regarding purse splitting, and some light insult banter (Hearn would derisively refer to Wilder rep Shelly Finkek as “Shirley Winkel”). That energy got transferred over into the realm where parties that announced they wanted to get Fury-Joshua done and on the schedule, as Arum has taken shots at Hearn and Hearn has done some countering, as well.

It’s disappointing, but I feel like Hearn’s energy is the one that we the frustrated people should match. He is acting like this is what it is, and he will be nimble in shifting his efforts to planning for option B. That can be a challenging ask, because these top tier fighters do battle so rarely, that it often feels like the flirting to f—–g ratio is out of whack….We pay attention to the outside of the ring jockeying, and we don’t receive payoffs very often. This is the age we are in, though, and I don’t see the ratio changing anytime soon. The sums of money these mega fights can summon insures the superstars of the sport fight only occasionally, and that more time will be spent on making the clashes than in trafficking in the certainty zone that exists when the contracts are filled out, and signed by all pertinent parties.