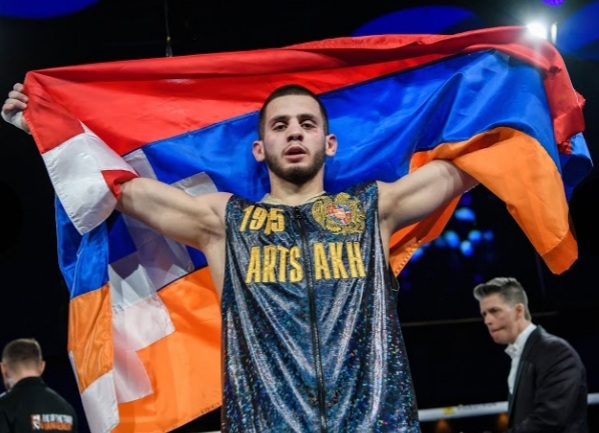 17
May
by Anson Wainwright

Best night of pro career and why: Oganesyan is most pleased with a 10-round shutout decision last March.

“The most enjoyable victory is the fight with the undefeated Mexican, Damian Sosa, who was 11-0,” Oganesyan told The Ring through Francois Pratte. “It was for the first belt in [my] professional boxing [career].”

Worst night of pro career and why: The Russian feels each fight has been beneficial to him so far.

“I can’t say because every battle gives me experience,” he said. “In every battle, I learn something. I don’t think I need to tell everyone about my mistakes.”

What’s Next: Oganesyan will face dangerous but fallible Venezuelan puncher Juan Ruiz (26-5, 18 KOs) in Khimki, a city in the northwest of central Moscow, Russia, on Friday. The Russian welcomes the step up in competition.

Ruiz turned professional in 2006. He won his first 21 outings, regularly fighting on the road in Panama, Germany, Nicaragua, Mexico and America. Ruiz then went on a 2-5 run, losing against the unbeaten quartet of Alexander Besputin (KO 7), Roberto Arriaza (UD 10), Sergey Lubkovich (RTD 2) and Carlos Adames (KO 3), who sported a combined 46-0 record when they met Ruiz.

Ruiz showed his power when he upset once-beaten Frederick Lawson (TKO 4). However, he then lost to Alessandro Riguccini (RTD 3). The 34-year-old has since returned with three low-level marking-time wins in Mexico.

Oganesyan will have to be careful of Ruiz’ power. If he can safely do that and impose himself in the fight he should have youth, size and power on his side to score an impressive win.

Why he’s a prospect: Oganesyan was a highly decorated amateur. He won several Russian junior championships. He was European junior silver medalist. The highlight of his amateur career came when he won gold at the World junior championships in 2015. He was recognized as the best boxer of the tournament and won best youth boxer in 2015.

In the amateur ranks, he beat up-and-coming American prospect Joey Spencer and lost to Willy Hutchinson in the final of the European Junior (U 17) Championships in 2014.

His trainer, Andrey Ivichuk, feels his charge is strong in three key areas.

“Artem has really [good] speed and power,” said Ivichuk. “But his biggest strength is that he works really well in counter attacking [his opponents].”

Camille Estephan, of Eye of the Tiger Management, is extremely hopeful that Oganesyan can go on to become a big name in boxing.

“Artem was a fighter that our GM, Antonin Decarie, had his eye on for a while,” explained Estephan. “We had some excellent scouting reports on him and we knew that there were a lot of suitors for him. When we saw an opening, we jumped all over the chance to sign him.

“He’s a massive talent who’s very serious. I think he will be a world champion, there is no doubt in my mind. He makes me think of a smaller [IBF/WBC light heavyweight titleholder Artur] Beterbiev but he’s so young, so to imagine the upside, is just awesome.”

Why he’s a suspect:  Oganesyan concedes he is a work in progress and is looking to improve across the board before making his move.

“In the gym we are constantly learning something new,” he explained. “This is speed work and strength work, endurance work, I.Q. work. We try to develop perfection in all aspects. We give ourselves to work 100 percent.”

As well as the 10-round unanimous decision over Sosa, he stopped experienced warhorse Alexandr Zhuravskiy in 10-rounds.

Going deep into a fight isn’t a concern for the young Russian and also a good experience. “We have no problem with that,” he said. “We spar a lot, work a lot on the pads and footwork and on a heavy bag. Each stage of preparation is important for us and we do our best so that there are no problems with this.”

Storylines: Oganesyan, who is of Armenian descent, was born and still lives in the Russian capital of Moscow. “Since [my] childhood I have been involved in sports,” he explained. “My parents did everything to make my childhood the best and it was the best.

“I have an older brother and two younger sisters. At the age of 10, my father brought me and my brother to boxing. I loved it from day one.”

He trains at the Bupas gym, Moscow, with his coach Andrey Bupas.

He respects both Canelo Alvarez and Terence Crawford and feels they are the two best active boxers.

Away from boxing, Oganesyan enjoys spending time with his family and friends.