Brandon Figueroa proved that he's not just a pretty face vs. the more experienced Luis Nery. Photo / SHOWTIME
15
May
by Joseph Santoliquito

The so-called “pretty boy” didn’t look so pretty. He had reddish welts over his swollen blue eyes. His forehead was discolored and scraped, though none of that could dampen Brandon “The Heartbreaker” Figueroa’s beaming smile.

He used to be teased as a kid coming up that he was too good looking to be a fighter. That his face couldn’t take getting hit. Each time, Figueroa would rail against those charges, with a warning that once he gets his shot, he’ll prove everyone wrong.

On Saturday, Figueroa did, by stopping Luis Nery at 2:18 of the seventh round to win the WBC junior featherweight title on Showtime’s Championship Boxing in a Premier Boxing Champions event from the Dignity Health Sports Park in Carson, California.

The Heartbreaker was down at the time of the stoppage, 59-55 on judge Dr. Lou Moret’s scorecard and up 58-56 according to judge Zachary Young. Judge Edward Hernandez Jr. had it 57-57. 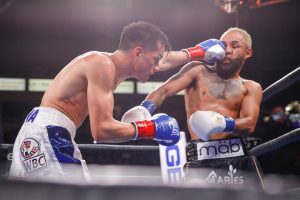 Figueroa takes it to Nery, which was his simple but ultimately effective game plan. Photo / SHOWTIME

“This feels amazing, it’s a dream come true ever since I was seven years old, and I’m here living it,” Figueroa said. “I know everyone doubted me. But here I am with the belts. We just took it to him. That was the plan, to break him. Joel Diaz told me to put pressure on him, he wasn’t going to last.

Figueroa’s body attack and constant pressure was getting to Nery (31-1, 24 KOs). The feeling was that Nery was not able to carry his power from 118 to 122, and against the 5-foot-8 Figueroa, it showed.

The more the larger, 24-year-old weighed and leaned on Nery, the more the 5-foot-5 Mexican southpaw looked fatigued. He could not keep Figueroa away. With :53 left in the seventh, Nery went down for the fourth time in his career from a Figueroa left to the body, just under the chest, and couldn’t get up.

Danny Roman proved that he’s still a viable contender for one of the major 122-pound belts. The former WBA and IBF junior featherweight titlist got off to a slow start, but gradually wore down, then broke up Ricardo Espinoza (25-4, 21 KOs) in the co-feature taking a unanimous 10-round victory. 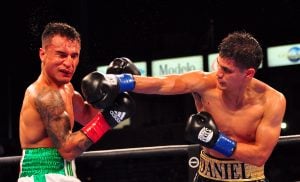 Roman (29-3-1, 10 KOs) really dominated the second half of the fight. Judges Rudy Barragan and Edward Hernandez, Sr. each had it 98-92 for Roman, giving the 31-year-old the last eight rounds, while judge Zachary Young had it 97-93 for Roman, giving him the last six rounds.

Roman used a steady diet of uppercuts and body shots to break Espinoza down.

“This win is a step closer to getting back on top and getting a world title once again,” Roman said. “I knew he was a tough fighter who hit hard, so I had to fight smart and make adjustments.

“I started to get my distance and started fighting my fight and controlling the ring. Once I did that, everything started to fall into place. I was surprised he went the distance, but he has a lot of heart. He’s a tough fighter.

“I’m the mandatory, so I want a title shot now. I want the winner of the main event. I won the mandatory for the WBC belt in September against Payano. I am the mandatory to fight the champion. I had a great fight tonight and I believe deserve the chance. I still got it, I am still up there. I am just waiting to get back on top.”

By the eighth round, Espinoza’s face started to break up. Roman snapped back Espinoza’s head with an uppercut in the eighth.

In the opening TV bout, 23-year-old junior lightweight Xavier Martinez (17-0, 11 KOs) outlasted veteran Juan Carlos Burgos by unanimous scores of 99-91 (3) over 10 rounds. For some reason, the decision was welcomed by boos from the crowd. 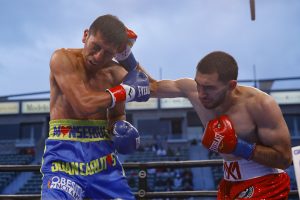 The reaction baffled Martinez, who got up from the canvas twice to win his last fight.

“I had fun tonight, you guys enjoyed the fight, so I don’t why you’re all booing,” Martinez said to the crowd during his postfight interview. “I felt I could have done better, but I felt I was landing the cleaner, harder shots the whole time. It was good having tests like this, all of these tough fights help me get better. I showed I can hang in there with a tough opponent.”

The 17-year veteran Burgos (34-5-2, 21 KOs) had no problem engaging Martinez early, creating a war. By the middle rounds, the two were still going at it, though it was obviously clear Martinez was getting the better of the exchanges.

“He was a great opponent,” Burgos said. “Many people don’t know that I was brought in on late notice. Just two weeks in advance. That’s not an excuse but just the reality. Martinez fought a hell of a fight. He is definitely one of the best opponents I have ever faced.”

The duo combined to throw 1,721 punches.

“I do have a rivalry with Chris Colbert,” Martinez said. “That’s not a secret, everyone knows that. If we can make that happen, that would be cool. That would be a really fun fight for both of us. He’s a boxer, I come forward. We will cause a lot of fireworks with that one.”

The results off TV: Lightweight Jose Valenzuela (8-0, 4 KOs) stopped Nelson Hampton (7-4, 4 KOs) in the first round of a scheduled eight-rounder.