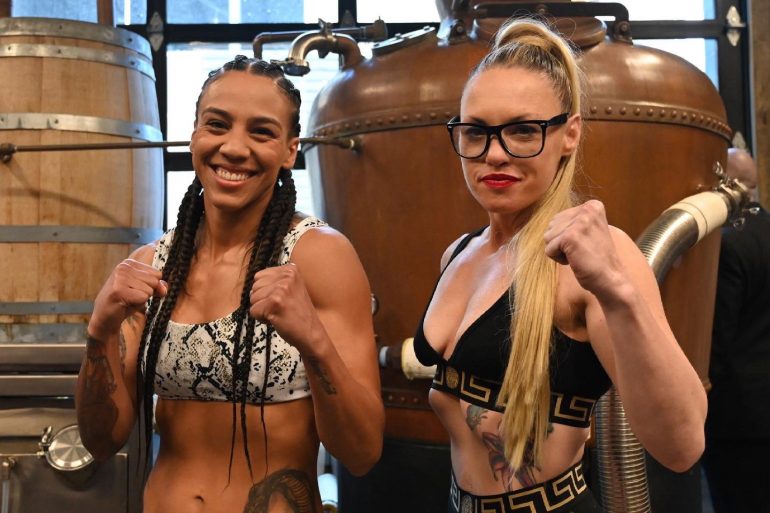 Photo from Lou DiBella's Twitter
14
May
by Ryan O'Hara

If this was Heather Hardy’s final fight, Jessica Camara sent her into retirement.

Hardy (22-2, 4 KOs), 39, who stormed out of the ring with her team after the scores were announced, has dropped two fights consecutively, dating back to her lopsided unanimous decision defeat to seven-division champion Amanda Serrano  in September 2019.

The 33-year-old, who was outpointed by Melissa St. Vil over 10 rounds in Indiana in February 2020, was overwhelmed with emotion.

“I can’t even try to describe this feeling right now,” Camara stated. “I went up against actually one of my role models, growing up in the sport of boxing.

“This means so much for me. This is the biggest highlight of my career.”

Hardy scored a knockdown just 20 seconds into the bout as a short left hand forced Camara to take a seat.

However, Camara rallied to land the better combinations in the opening round and subsequently dominated the remainder of the bout.

By the midway point of the fight, Camara had systematically broken down Hardy and dictated the pace behind her jab, combinations, and ring generalship.

“[Our plan was] to come into the first round with a stiff jab, look for the openings,” she explained.

“I was just listening to my corner to give me instructions, and I was just doing exactly what they told me to do, and we got the job done.”

With roughly a minute remaining in round five, Camara connected with a series of hard right hands that knocked Hardy back. She also followed up with a left hook to the body that had the same effect.

Camara started the eighth round with a bang as she clipped Hardy with a crisp right cross. She then landed a textbook three-punch combination before the final bell sounded.

Camara will have to quarantine for 14 days when she returns to Montreal due to COVID restrictions, but she will fly home as a winner.