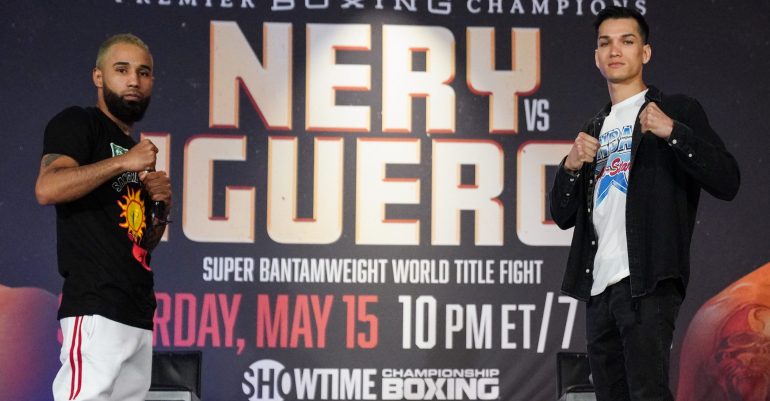 13
May
by Joseph Santoliquito

Luis Nery likes to wear his beard thick. The WBC junior featherweight world titlist says he’s proud of it. He says he’s adjusted well to moving up from 118 pounds to 122.

The 26-year-old southpaw from Tijuana, Mexico, says he’s ready for the biggest fight of his career so far, against Brandon Figueroa (21-0-1, 16 knockouts) this Saturday night (10 p.m. ET/7 p.m. PT) in the featured bout of Showtime’s Championship Boxing in a Premier Boxing Champions event from the Dignity Health Sports Park in Carson, California.

Nery (31-0, 24 KOs) has stopped 11 of his last 12 opponents, save for when he stepped up from 118 to 122 to win the vacant WBC junior featherweight title with a unanimous decision over Aaron Alameda last September.

“I don’t care what he looks like, or how pretty he may be, he’s a threat to my future objectives. The bottom line is I have to go in there and I have to eliminate that threat. That’s all I want, that’s all I need. I don’t care about anything else. I’m not underestimating him in the least.”

The 24-year-old Figueroa says he respects Nery as a fighter, though that respect will end once the bell rings.

“I feel the same way,” Nery said. “I think Brandon is a good guy, but respect goes out the window once the fight begins. I’m going to try and be as rude as possible, and get the win that I know that I want.”

Nery says he has no plans of thinning his beard out by the time the fight occurs on Saturday.

“It’s in his nature to fight aggressively, even if he doesn’t want to, so what I’m going to do is adapt to whatever he has in mind. I feel really strong right now. My weight is good I feel a bit tired, but that’s part of my preparation. It’s a good tired. You can expect a different Luis Nery than the last fight, strong, explosive and entertaining.

“Knocking people out may be a little harder right now, at 122, though in the end it works out nice for me. Brandon’s style really fits with what I want to do in the ring. I know that I can achieve everything that I want in this division and show all of my skills in this fight. This style will go better with mine than Aaron Alameda’s did in my last fight.”