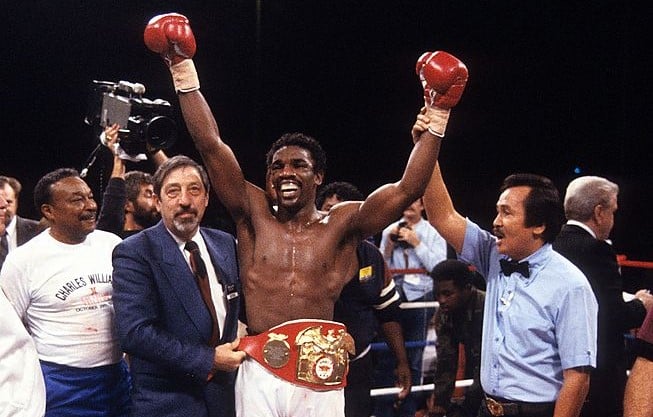 Hard-nosed Charles Williams came up the hard way, learning on the job and honing his craft until he won the IBF light heavyweight title and made eight defenses during a five-and-a-half-year reign.

Williams was born in Columbus, Mississippi on June 2, 1962. His mother moved the family over 700 miles north to Mansfield, Ohio, when he was seven years old.

“Very difficult growing up,” Williams told The Ring of his early years. “Nine kids and a single mother, [she] didn’t give us everything we needed, we suffered a lot. Not being able to have this, have that; have clothes, have stuff for school.”

When Williams was 14, he started boxing.

“My older brother was a boxer and I followed him to the gym,” he said. “I had a sister, a year older than me, and she used to whoop me all the time, so I got into boxing  and I got pretty good at it.”

Williams, who left school at 16, went 34-2 as an amateur. The highlight of his unpaid tenure was when he was runner-up to Tony Ayala at the 1977 junior Olympics.

The young novice lost his debut in June 1978 and things didn’t get much better in his second outing when he was awarded a draw. In his 12th bout, Williams was stopped in six rounds by future cruiserweight world champion Jeff Lampkin, but a win over big-punching Anthony Witherspoon turned out to be a watershed moment in his career.

“A young lady called Jerry Stapleton saw me, and I had a problem with my manager,” he recalled. “She contacted me and asked if I’d mind if she bought my contract.

“It took about a year, a year-and-a-half before we really got a fight, she didn’t really know what she was doing. She wanted to get into boxing and give me an opportunity.”

Things picked up for the unlikely pairing after he fought former world champion Marvin Johnson in 1984.

“Even though I lost the fight, I had him hurt in the 10th round,” Williams said. “His promoter Russell Peltz saw something in me and said he’d like to promote me. He said I needed a good trainer and hooked me up with Marty Feldman in Philadelphia.”

“Prince” embarked on a nine-fight win streak, gaining revenge over Lampkin and edging Joe Salerno to become the USBA light heavyweight titleholder. Following one defense he stepped up to world level against IBF titleholder Bobby Czyz.

The heavy underdog rose from two early knockdowns to close Czyz’s right eye which forced the referee to stop the action at the conclusion of nine brutal rounds.

“I shocked the world,” he said. “Oh yeah, that’s a day every fighter dreams of, to become champion of the world.”

Williams made two defenses in France before stopping Czyz in the 10th round of their rematch.

The rugged boxer-puncher went on to retain his title against Frankie Swindell (RTD 8), James Kinchen (TKO 2) and Vincent Boulware (KO 3). On the flip side of all this success, however, Williams broke his left hand three times and was inactive for 18 months before losing his title to Henry Maske in March 1993.

“By me moving down to super middleweight, I just didn’t have the power I needed,” admitted Williams. “I hadn’t been that size since I was 15 years old. I had six good rounds in me at super middleweight. I knew if I couldn’t get him within six, I wouldn’t win the fight.

“I fought the only way I could fight. With Toney, I just stayed there, I didn’t have the legs to move.”

In truth, the pair fought on near-even terms in an action-packed fight before Toney landed a perfect right hand that knocked Williams out with just 15 seconds remaining in the final round.

“I never should have made 12 rounds with James Toney,” he said of their grueling encounter. “He wasn’t a big puncher, I just got tired and he caught me.” 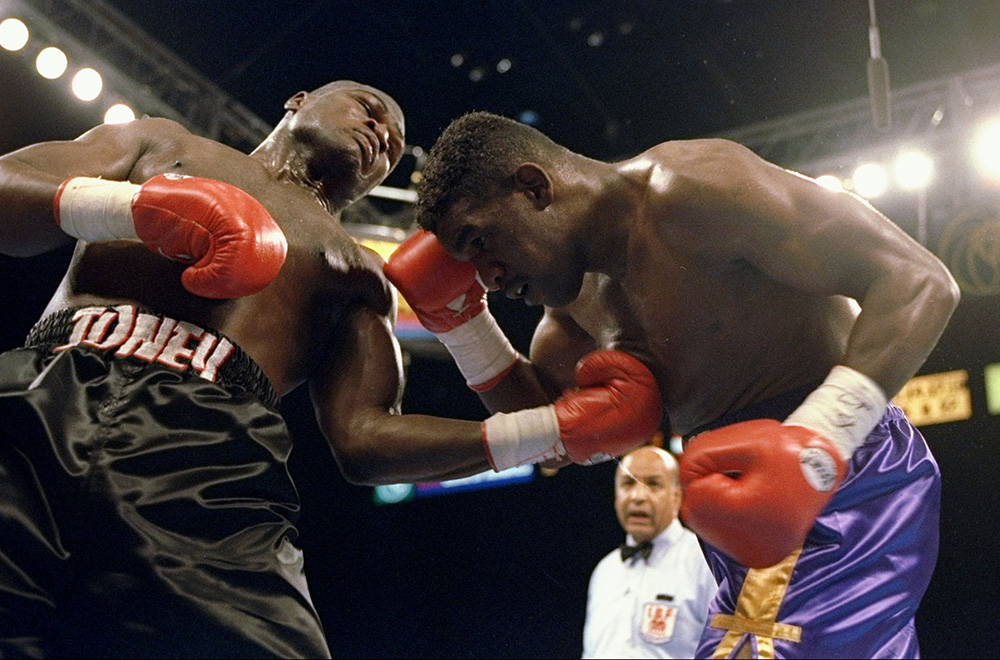 Williams (right) mixing it up with James Toney. Photo by Al Bello/ All Sport

Williams rounded out his career with two brutal wars against Merqui Sosa. The first fight was stopped and declared a technical draw because it was too brutal.

“They said I was cut too bad and his eye was shut,” Williams recalled. “They never warned me about the cut over my eye. I thought I was good to go. They just stopped the fight because neither one of us could continue. We made history there, first fighters to ever do it.”

They met in a rematch, six months later, and Sosa had the better of things en route to a 10th round stoppage.

“I had been doing it for 19 years and I knew it was time [to retire],” Williams said. “I’m a God-fearing man, God lets you know when it’s time. I always prayed to God and said when I’m 31 I’ll retire. When I got past 31 that’s when everything started happening to me, and I woke up and said, ‘OK God, I hear you, I’m going to let it go.'”

Williams, now 58, still lives in Mansfield, Ohio. He has been married for 32 years, has two children and four grandchildren. He enjoys his family, spends time at church and helps the local community.

“I wouldn’t trade it for anything in the world, it’s been beautiful” he said of his life today. “I rededicated myself to my Lord. I work with the church, helping the pastor.

“I work with the kids, I do an after-school boxing program Monday-Thursday, and church Wednesday night and Sunday. I’ve had a wonderful life, it feels great.”

The former light heavyweight titleholder graciously took time to speak to The Ring about the best he faced in 10 key categories.

BEST JAB
James Toney: He was a good mover; he knew how to rotate his shoulder well. It wasn’t a powerful jab but it keeps you busy. You had to stay focused all the time.

BEST DEFENSE
Henry Maske: He was a tall, lanky guy and he was a southpaw. He was very awkward to hit. He punched from all types of angles.

BEST HANDSPEED
Frankie Swindell: He had good speed for a light heavy. He was the type that put his punches together. When he let his hands go, there were six or seven punches coming out and they were really quick.

BEST FOOTWORK
Toney: He had a good shell behind the footwork, he had his chin tucked, he could spin really good, he would spin out sideways, he knew how to rotate and that all came from his feet.

SMARTEST
Jeff Lampkin: He would bait you, take his time, he wasn’t in no rush. If he hurt you, he didn’t get over-aggressive. He took his time and picked the shots until he got you out of there.

STRONGEST
Mwehu Beya: He had good punching power, he was tall and lanky, and one thing about him, he wasn’t an offensive fighter. He sat back and tried to land a big shot. He was very strong.

BEST PUNCHER
Bobby Czyz: Bobby Czyz definitely had that power. The first fight, I got knocked down twice. I got knocked down in the second and third rounds, I don’t remember the second knockdown. I got up and I fought six more rounds until I stopped him in the ninth. After that fight, I didn’t remember the interview, people kept telling me I was world champ and I kept saying, ‘If I was world champion why didn’t they interview me?’ They said, ‘They did interview you!’ I didn’t remember any of that until that night when I sat in the lobby at the Hilton and watched it on TV.

BEST CHIN
Merqui Sosa: He took a lot of punishment. I can’t take it from him because he was tough. Mike Fisher, I beat that guy like a drum and he still didn’t go nowhere and the referee had to stop it. I would say Merqui Sosa.

BEST BOXING SKILLS
Toney: You have to go with Toney because of the defense he had. He could jab, move, he knew how to box, go in and out.

BEST OVERALL
Czyz: It’s between Bobby Czyz and James Toney. Both of them were hungrier, they wanted to be the best. Some fighters just come to fight and don’t look to win; they hope they win, but they guys had it in mind that whoever they faced they could beat. I would go Czyz. I would have beat Toney if I fought him when I fought Czyz at light heavyweight. He fought me at super middleweight and beat me at the end of my career, when I was 32 years old.