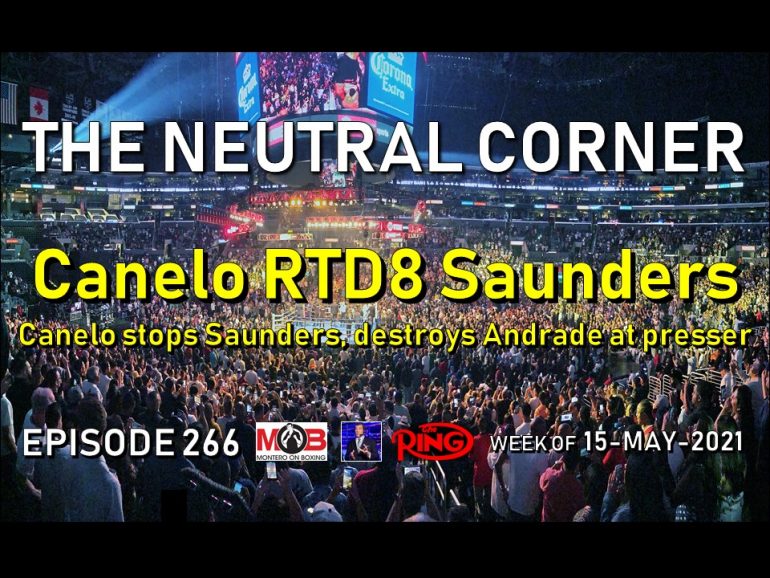 11
May
by Michael Montero

On episode 266 of The Neutral Corner boxing podcast, host Michael Montero gave his thoughts on the Ruiz vs Arreola PPV numbers. According to reports, the PBC on Fox PPV card sold in the neighborhood of 100-150K buys.

Montero also discussed the back and forth between Canelo Alvarez and Demetrius Andrade. The two exchanged words during the Canelo-Saunders post-fight presser. Andrade crashed the party, trying to bait Canelo into a possible fight down the road. The Ring, WBC, WBA and WBO super middleweight champion wasn’t having it.

“Get the f*ck out of here!” he told Andrade repeatedly in English. “You haven’t fought nobody. You’re a horrible fighter man. You’re looking for a payday.”

Alvarez seems to be embracing his role as the modern face of boxing. He’s been showing more of his personality, both in Spanish and English, during media events in recent times.

There was one major card of note last week, and it was a massive commercial success. The Canelo-Saunders card headlined a Matchroom Boxing show on Saturday, May 8. Attendance at AT&T Stadium in Arlington, Texas was reported at 73,126, a record for indoor boxing events in the United States.

Saunders, the formerly undefeated WBO titleholder, boxed well in the middle rounds against Canelo. Everything changed in an instant during the eighth round, however, when Alvarez connected with a monster counter uppercut that immediately damaged the Englishman’s right eye.

Although Saunders was able to finish the round, his corner wisely stopped the fight before the start of the ninth. It was later reported that he suffered a “quadripod fracture” to his orbital bone, requiring surgery to repair.

The official judges had Canelo ahead 77-75 and 78-74 twice at the time of the stoppage. Now, Caleb Plant (IBF titleholder) is the only man that stands between Alvarez and complete unification of the 168-pound division.