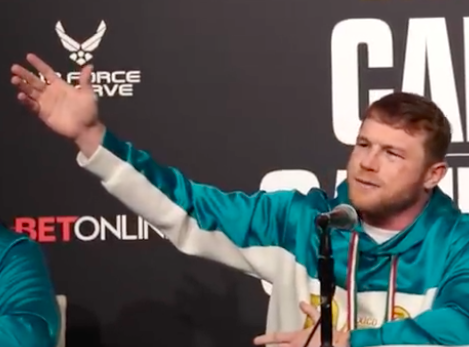 10
May
by Dan Rafael

ARLINGTON, Texas – What began with WBO middleweight world titlist Demetrius “Boo Boo” Andrade respectfully calling out unified super middleweight world champion Canelo Alvarez to fight him in the wee hours of Sunday morning quickly degenerated into a shouting match filled with cursing and threats, and ended with Andrade and his father/trainer Paul Andrade being escorted out by security.

Alvarez, flanked by promoter Eddie Hearn of Matchroom Boxing and trainer Eddy Reynoso, had come to the media room at AT&T Stadium for his post-fight news conference more than hour after he had had broken Billy Joe Saunders’ right orbital bone in multiple places and forced him to retire on the stool after the eighth round. Saunders had surgery on the fractures on Sunday.

Alvarez retained The Ring and WBC/WBA titles and took Saunders’ WBO belt to move one step closer to his goal of becoming the first undisputed 168-pound champion, which he hopes to achieve by defeating IBF titlist Caleb Plant in September if they can make the fight.

Plant was not on hand for Saturday night’s fight, which drew a United States indoor boxing record of 73,126, but Andrade, also a Matchroom Boxing and DAZN fighter like Alvarez, sure was.

Andrade (30-0, 18 KOs), a 30-year-old southpaw and 2008 U.S. Olympian from Providence, Rhode Island, has won world titles at junior middleweight and middleweight but has yet been able to get the big fight he has so badly wanted, mainly because he is an immensely talented and slick boxer, who probably would give anybody a difficult fight, but is not a popular box office or television draw.

Andrade was in the back of the media room and after Alvarez had answered a few questions, suddenly Andrade, who was wearing a black t-shirt that read, “Canelo & Billy Joe are scared to fight Boo Boo,” piped up without having the microphone the moderator was passing around.

“So, when can we get something going on? Congratulations,” Andrade began.

When Alvarez (56-1-2, 38 KOs), 30, of Mexico, realized it was Andrade speaking, he said, “Oh, my God,” and put his head down on the table before flashing Andrade a thumbs up and thanking him. 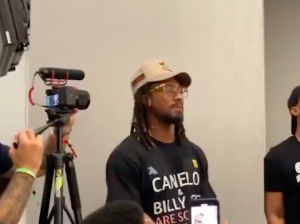 Andrade said he wasn’t intending to touch off a scene.

Andrade shot back, “You avoided me!”

Then Alvarez turned up the heat even more after Paul Andrade, Demetrius’ father and trainer, began shouting at Alvarez.

“Get the f— outta here because I’m gonna f— you up right now mother f—–,” Alvarez said, at which point Andrade and his father were being held back.

As security began to escort them from the room, Alvarez dug the knife in more.

Andrade shouted back, “Come beat me then you little bitch!”

Alvarez, smiling the whole time, responded almost as though he was singing, “Payday, payday — you want a payday. I know that.”

Andrade answered, “Watch your mouth! When I see you it’s on!”

Alvarez has not usually shown that side of his personality, but he did it because he is tired of being needled by Andrade and because he has grown more comfortable speaking in English publicly. 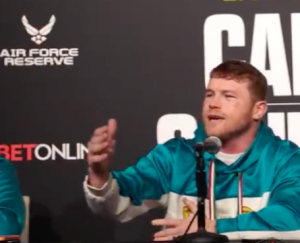 Later, Andrade told The Ring he crashed the news conference because he truly believes Alvarez has avoided him.

“I did it because I know 100 percent he has strategically avoided me at 154 and 160. He hides behind his opinion that I’m boring and that I haven’t fought nobody but we all know those are excuses. Who did Callum Smith fight, who did the Turkish guy (Avni Yildirim) fight, who did Rocky Fielding fight to deserve fights with Canelo,” Andrade said of recent Alvarez opponents. “With that said, I wanted to have a conversation with him, but unfortunately things got out of hand quick. That wasn’t the plan.

“He said he wanted to be undisputed champ at 160. Then when I got WBO title he passed up a chance to be undisputed middleweight champ, a huge accomplishment, and fought (Sergey) Kovalev (for a light heavyweight belt instead).”

Andrade still hopes he can eventually land a fight with Alvarez despite Alvarez’s words that he would never face him.

“We’ll see what happens,” Andrade said. “He is running out of people to fight though.”