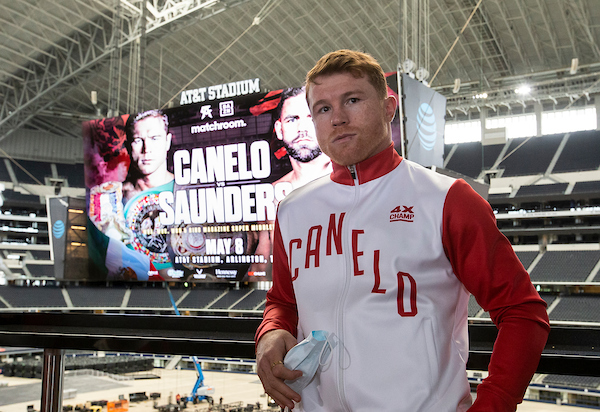 Photo by Michelle Farsi/ Matchroom
07
May
by Dan Rafael

ARLINGTON, Texas – Pound-for-pound king Canelo Alvarez, boxing’s biggest star, is constantly asked about various potential fights, even as he is preparing for one that is just days away.

So, while Alvarez, The Ring/WBC/WBA super middleweight world champion, is set to meet WBO titlist Billy Joe Saunders in a title unification fight on Saturday (DAZN, 8 p.m. ET) at AT&T Stadium in the biggest fight of the year so far, he has patiently answered queries about other bouts from media members.

The one always at the top of the list, of course, is the prospect of a trilogy fight with rival Gennadiy Golovkin, whom Alvarez is 1-0-1 against in middleweight world championship mega fights.

Their first showdown in September 2017 resulted in a heavily disputed split draw that most saw Golovkin as the rightful winner. Alvarez escaped with a majority decision win in the September 2018 rematch that also elicited controversy.

Following the final pre-fight news conference for his fight with Saunders on Thursday at Live! by Loews, the official fight hotel next to the stadium, Alvarez was once again asked about a possible third fight with GGG. 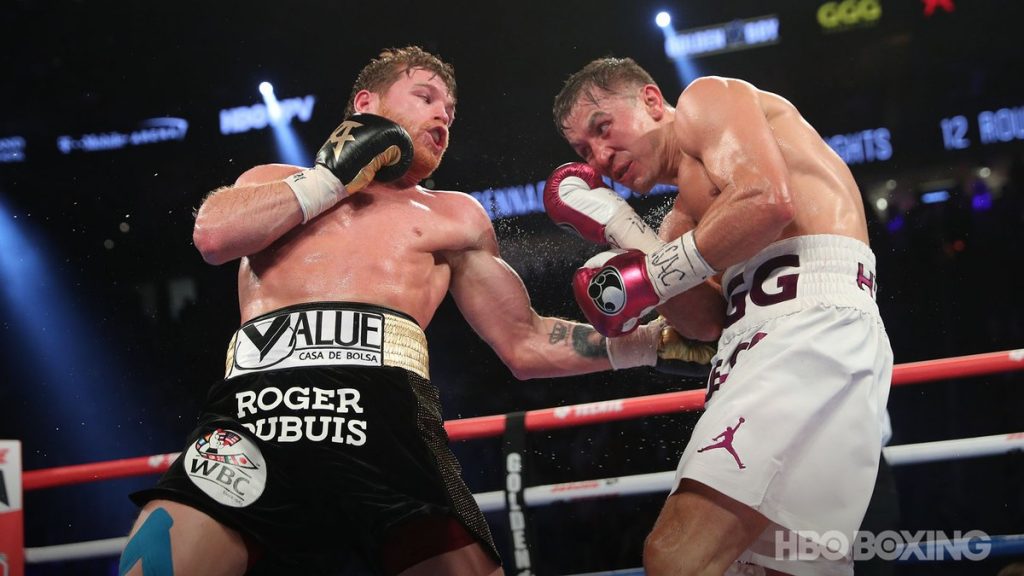 Alvarez (55-1-2, 37 KOs), 30, of Mexico, is aiming to unify the four major super middleweight sanctioning body titles this year by beating Saunders before he hopes to move on to the undisputed bout with IBF titlist Caleb Plant in September.

Golovkin (41-1-1, 36 KOs), 39, a Kazakhstan native fighting out of Santa Monica, California, holds the IBF middleweight title, but Alvarez said he would not return to 160 pounds for the bout.

“If he wants the fight with me he has to do it,” Alvarez said of Golovkin moving up to the super middleweight division. “Why wouldn’t he do it? I went up from 154 up to 160 to fight with him.”

Whether the fight third fight between Alvarez and Golovkin happens or not, Alvarez said he does not believe his boxing career will be defined by those two huge events.

“I’ve fought a lot of good fighters, a lot of champions,” Alvarez said. “I beat him and I think that everything else will leave the legacy of my career.”

Matchroom Boxing promoter Eddie Hearn said that ticket sales for Alvarez-Saunders were near 65,000 as of Thursday afternoon, which will put the fight in the record book.

The capacity for the event is about 70,000 but even at 65,000 it will not only will shatter the AT&T Stadium boxing attendance record of 51,240 that Alvarez set against Liam Smith in 2016 and make the fight the largest gathering of any kind in the United States since the start of the coronavirus pandemic, it will set the record for largest attendance for an indoor fight in U.S. history.

The record was 63,352 for the heavyweight championship rematch between Muhammad Ali and Leon Spinks at the Superdome in New Orleans in 1978.

“This is one of the biggest events I’ve ever been involved with,” Hearn said on Thursday. “This morning we officially broke the record of the biggest indoor crowd in U.S. boxing history. Ali-Spinks rematch from 1978, we went past that today. We will have 70,000 people in the AT&T Stadium. The largest crowd in the U.S. since the pandemic and what a great statement for boxing to show that when you put great fights on, we get it right, we hit the numbers and sat will be an atmosphere we will never ever forget.”

Texas Combative Sports Program has assigned the officials who will work the fight. The referee will be Mark Calo-oy, of Texas, who has never been the third man in the ring for an Alvarez or Saunders fight. The three judges, all Americans, will be Glenn Feldman, of Connecticut, Tim Cheatham, of Nevada, and Max DeLuca, of California, all experienced championship-level judges.

England’s Saunders has complained about their not being a British judge on the panel but as Alvarez has reminded him, there isn’t a Mexican judge either.

Alvarez revealed that during the week of his December 2018 fight with Rocky Fielding at Madison Square Garden in New York, he was not only preparing for the bout but also negotiating the release of one of his brothers, who had been kidnapped in their native Mexico the Monday prior to the bout. Alvarez dropped that shocker during a television interview with Graham Bensinger.

Alvarez said he declined to contact the police because he thought they may have been involved in the kidnapping, which ended with the brother being let go unharmed after Alvarez negotiated the release through an intermediary.

“Over the phone, I negotiated everything for his release,” Alvarez told Bensinger. “For three days, I negotiated with those a—holes, so they would let him go. Three days. And after I negotiated, I was still thinking, imagine if this had been my daughter, my mother, my father. For me, it would’ve been even more difficult.

“And on top of that, I had to fight on Saturday and (do) a thousand interviews and everything, and no one knew anything. And that’s what I’m getting at, everybody thinks, wow, you know, they see me up there and they said, ‘Wow! It’s very easy.’ But nothing is easy in this life. Everything is difficult.”

Alvarez said his brother was released before he faced Fielding and knocked him out in the third round, but he did not disclose what the cost of the release was.