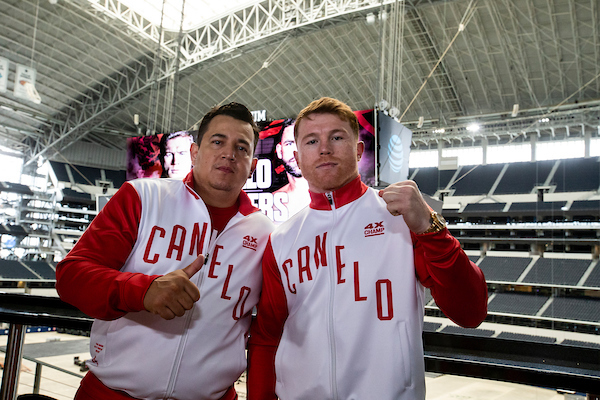 May 4th, 2021; Arlington, TX; Saul Canelo Alvarez and and his trainer Eddy Reynoso tours AT&T Stadium and addresses the media prior to his WBC, WBA and WBO unification fight against Billy Joe Saunders on May 8th, 2021. Mandatory Credit: Michelle Farsi/Matchroom.
05
May
by Joseph Santoliquito

Eddy Reynoso kept shuffling along, his tired feet inching ahead like cinderblocks. It didn’t matter that the arid, dusty winds slapped his face with disappointment with each passing gust. He wasn’t about to let his soul melt into the ether. So, he shielded himself with his forearm, put his head down and trudged forward.

Still, nothing was ever going to deter Eddy Reynoso from achieving his goal—to be the best boxing trainer in the world.

That’s where he’ll be in his omnipresent post working the corner of the world’s best fighter, Saul “Canelo” Alvarez, when The Ring/WBA/WBC super middleweight world champion takes on WBO titlist Billy Joe Saunders on Saturday (DAZN, 8 p.m. ET) at AT&T Stadium in Arlington, Texas, before an estimated crowd of 60,000.

Reynoso’s will power walked him across a desert—the same will power he instills in his fighters.

Reynoso had two choices: Go back, or have the strength to go forward.

Eddy kept moving forward. He was a 19-year-old kid wading through the Mexican wilderness in nothing but a T-shirt and faded blue jeans, looking for a new beginning in the United States.

His goal was to train fighters. In truth, he may have been already. Reynoso trained himself to ignore whipping winds, craving thirst, swollen feet and aching joints.

He would not bend.

Reynoso is well aware that if he didn’t possess the gumption to take the chances he did, he would not be where he is.

“It’s a very humbling and a very honorable experience to be able to be in this great country, the United States, and to go through what I did, entering illegally the first time and being incarcerated for being an immigrant,” Reynoso said. “I respect the United States, being in this great country and the opportunity this country gave me changed my life. It’s an experience I’ll never forget.

“I’ll remember to this day the man who was kind enough to lend me his jacket when I was walking (from Mexico). When I was out in the desert it was very scary, and very cold. We had nothing. I had the clothes on my back. That was it. I was freezing, and I never left home by myself.”

Reynoso, a self-made, 44-year-old millionaire and father of two daughters, 11 and four, was first caught by the U.S. border guard and sent back to Guadalajara, Mexico. He tried a second time, only to be caught again, though this time detained and moved to three different detention centers in a month. He kept thinking there was something better ahead.

He would not break.

There were many nights he was alone in the cramped cement facility, looking up at the stars and dreaming.

“I just had to stay focused on what I wanted,” Reynoso said. “It tests you. But I learned from my father (esteemed trainer Jose ‘Chepo’ Reynoso) and mother that things are tough for everybody and never change your mindset.

“I had to continue moving forward and never give up. It was a hard time.”

It was a long, winding road for Eddy. After he was released, he lived in a small backroom apartment with a family, while working 15 hours daily as a butcher with his father in Salinas, California, for a $100 a week.

Eddy did that until 2002, before he rejoined his father in Guadalajara to train Oscar “Chololo” Larios, who went on to become the WBC junior featherweight and featherweight titlist. That launched the Reynosos, particularly Eddy, who came across a 13-year-old redhead in 2003 and it changed everything.

Eddy and Canelo are inseparable. You see one, you invariably see the other. They’re a father-son duo that no one can part.

“When I was 12 years old, I dreamed about becoming a professional fighter. Things didn’t come out the way I dreamed, but life turned and it placed me in a position to be a trainer,” Eddy said. “I started training when I was 24, my father got me into it because he saw the passion and love I have for the sport. My father put it in my head, and the other was Hall of Fame manager Rafael Mendoza, that I could be a successful trainer.” 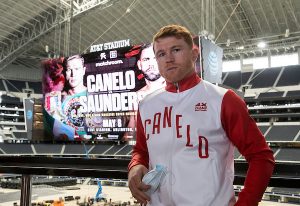 Life changed for Eddy Reynoso when a 13-year-old redhead named Saul Alvarez walked into his gym in 2003. (photo by Michelle Farsi/Matchroom.

Eddy initially began working with Larios and former IBF lightweight titlist Javier Jauregui. Alvarez was the third, and Eddy distinctly remembers how strong Canelo was. Eddy put Alvarez in with a 16-year-old with four years of experience and Canelo tore him apart.

“Picture Saul now, but with a 13-year-old body, he was the same,” said Eddy, who was 27 when they met. “He’s always been so strong and powerful that he was beating up everybody. I can say Saul changed my life as much as I changed his. We came together very well and we complement each other. It’s destiny.

When Alvarez was notified that he was the BWAA 2019 Fighter of the Year he reacted with excitement, but it was an even bigger deal to Canelo that Reynoso was also named BWAA 2019 Trainer of the Year. It was so much more important to Alvarez that his trainer and mentor was recognized with the honor that he asked if he could be the one who calls Reynoso to inform him.

“I like fighters who are disciplined and like to learn. That’s why there are a lot of fighters out there that are good fighters, but they don’t like to learn. I want my fighters to use me as a tool, like a sponge and absorb my knowledge. I want to give them what I know and use it.”

It pulled on Ruiz emotionally that Reynoso thought enough of “The Destroyer” to take him into their camp. Everyone else in boxing, it seemed, gave up on Ruiz for his lack of discipline after losing the titles to Anthony Joshua in their December 2019 rematch. Reynoso made the point early with the former heavyweight titlist that if he wasn’t ready to work and be disciplined, he wouldn’t be around long.

“Andy showed me he was willing to work and I was surprised by the discipline he showed,” Reynoso said. “I always had a saying that if a fighter was a world champion, they are a world champion and I saw in Andy’s eyes that he had that desire again.

“I told Andy that we run a serious camp and we put a lot of hours in. Andy demonstrated that he was willing to work and it has paid off. I find myself saying and using the same expressions my father used. It’s led me to become more like a father figure with some fighters than a trainer.”

Everything began as a vision. A foresight that he braved savage winds with, slept with in dank, harsh detention centers and will one day carry him to the International Boxing Hall of Fame.

“That journey across the desert taught me how to be a man,” Reynoso said. “I was hungry, I was cold, I was thirsty, I didn’t know the language, and I was by myself with no money. But that journey also told me how strong I was.”

Reynoso did need to be corrected—he’s always been strong.