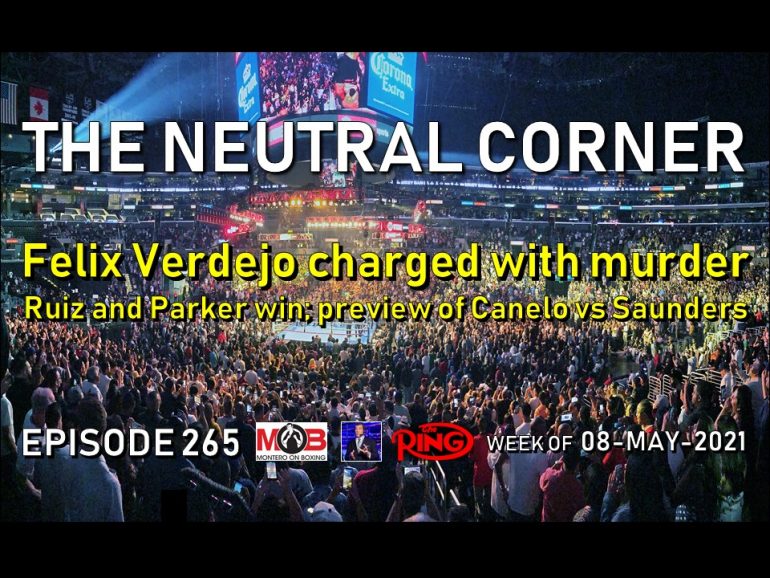 04
May
by Michael Montero

On episode 265 of The Neutral Corner boxing podcast, host Michael Montero broke down the latest news in the murder of Keishla Rodríguez Ortiz, the former girlfriend on boxer Félix Verdejo, who turned himself in to Puerto Rican police on Sunday, May 2. Rodríguez, who had recently told her family she was pregnant with Verdejo’s child, was reported missing on Thursday, April 29.

Montero was joined by Jacob Rodriguez, a writer for NYfights.com, who has been following the case very closely since it broke last week. Together, they attempted to separate the facts from the rumors that have been floating around on social media in recent days.

According to an FBI affidavit, a witness testified that he and Verdejo abducted Rodríguez at her residence, assaulted her, and took her to a nearby lagoon, where her body was dumped. Verdejo has been charged with kidnapping resulting in death, carjacking resulting in death, and killing of an unborn child. He is currently in custody and has been denied bail by Puerto Rican authorities.

Last Friday in London, Sunny Edwards beat Moruti Mthalane, taking the South African veteran’s IBF flyweight title by unanimous decision. It was a breakout performance from the 25-year-old, who handed Mthalane his first loss since Nonito Donaire stopped him in 2008.

There were two major cards of note on Saturday, May 1. In Manchester, Joseph Parker eked out a split decision win over Dereck Chisora in the main event of a Matchroom Boxing card on DAZN. The former heavyweight titleholder was dropped in the first round, but came back to control much of the second half of the fight. On the undercard, Katie Taylor successfully defended her undisputed lightweight championship against Natasha Jonas, and Dmitry Bivol defended his light heavyweight title against Craig Richards. Both fights went the distance.

In California, Andy Ruiz survived an early scare to outpoint Chris Arreola in the PBC on Fox PPV headliner. The former unified heavyweight titleholder was knocked down in the second round of what turned out to be an entertaining heavyweight slugfest. Erislandy Lara, Sebestian Fundora and Abel Ramos all scored wins on the undercard.

“I don’t care, any day of the week I’m taking Dmitry Bivol over Artur Beterbiev,” said Jack Alter. “He almost knocked out Joe Smith Jr in their fight.”

“I’m new to the sport,” said Andrew. “I got into it during that Mike Tyson Triller PPV card. I saw Ryan Garcia’s last fight against Luke Campbell, he’s really exciting. I hope the (recently cancelled) fight with Javier Fortuna can still happen.”

“I had the Parker vs Chisora fight scored seven rounds to five for Parker,” said Rich Lopez. “But I’m seeing the word “robbery” being thrown around, especially on social media. If a fighter wins a close fight, I don’t see that as a robbery, it’s just a competitive fight.”

“I think the Canelo vs Saunders fight is a lot closer than you (Michael Montero) think it is,” said Chris Bergin from the UK. “I do believe that Canelo will win, but it will be a close fight. It all depends on which Billy Joe Saunders shows up. We all know he can be a bit crazy.”

“In my opinion, I think Canelo will beat Saunders nine rounds to three,” said E’San Brodi. “I think people are overrating Billy, he’s not as skilled as Erislandy Lara (who fought Alvarez in 2014) is. At this stage, where Canelo is in his career, he’s too much for Billy Joe.”

@2:56 thoughts on the Felix Verdejo situation

@16:15 interview with Jacob Rodriquez of NYfights