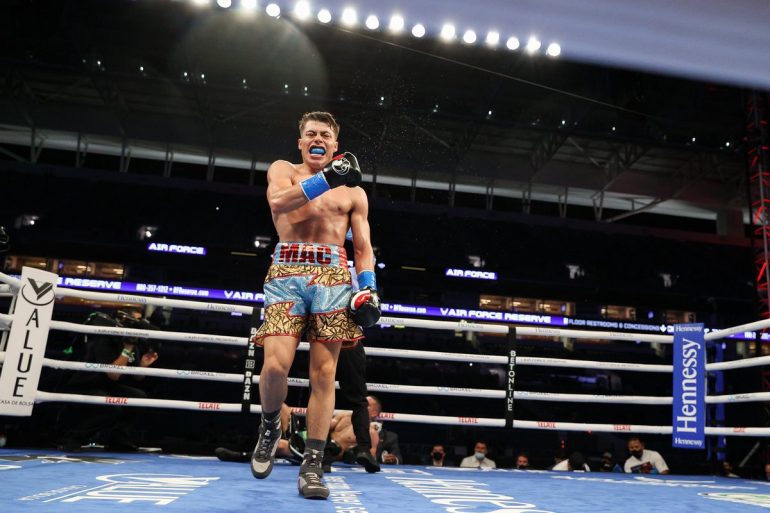 04
May
by Dan Rafael

In the fall of 2019 Marc Castro, then a top amateur boxer and now a blue-chip junior lightweight professional prospect, got the chance to train for about two months at pound-for-pound king Canelo Alvarez’s gym in San Diego. It was an experience he said changed his life.

Castro is friends with star lightweight contender Ryan Garcia, who shares trainer Eddy Reynoso with big brother figure Alvarez and trains alongside him.

Garcia invited Castro, who was getting ready to compete in the Olympic qualifiers, to train with him in San Diego. The trip made a huge impression on Castro.

Now, one-and-a-half years later, Castro is a pro on the rise signed to Eddie Hearn’s Matchroom Boxing who, thanks to Alvarez’s unusually active schedule considering his stature in boxing, will find himself fighting his third pro bout on his third Alvarez undercard in a row.

That is no accident.

“I feel blessed. I’m thankful for the opportunities,” Castro said. “I’m always going to give my all. Just knowing they believe in me and they want me on the cards as well, it’s every fighter’s dream to be on the biggest and brightest stages and they see the talent. I see my hard work paying off and it’s translating into success in the ring.”

“I joke around with Marc and say, ‘Hey, you know your fight after this is going to have to be on a non-Canelo card, right? Sooner or later you have to come down to earth and fight on a regular card,” said Keith Connolly, Castro’s manager. “But this is another great opportunity for Marc to be on such a big card and we’re thankful to Canelo and Eddie for putting Marc in this position.” 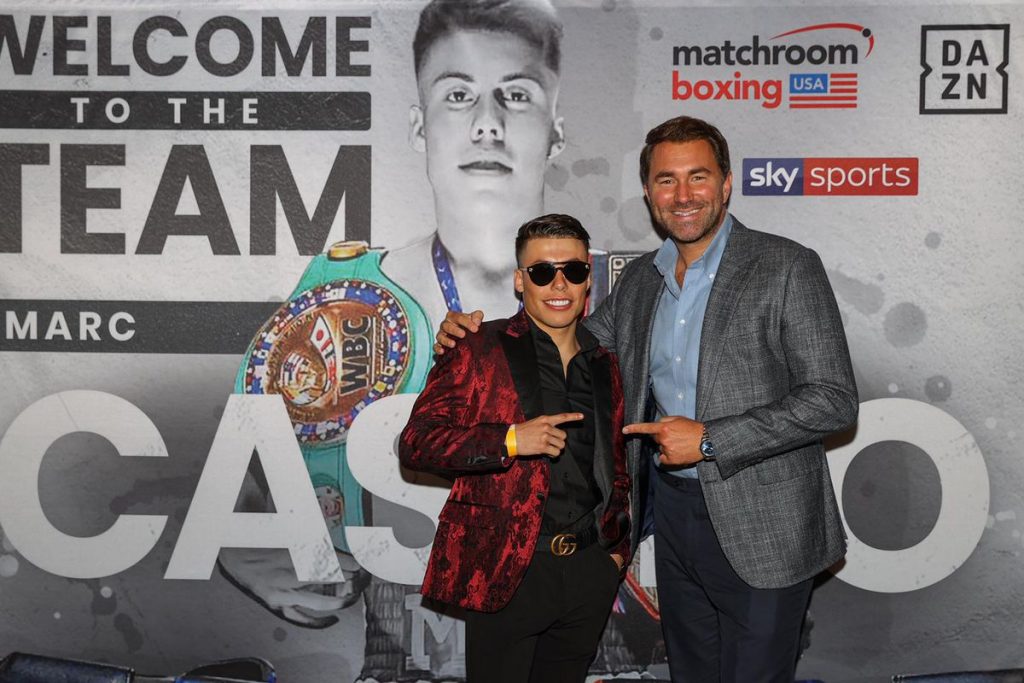 Castro understands the run of appearances on Alvarez’s shows will come to an end.

“I’ve been blessed, but I know the next one isn’t going to be, so I am going to soak this one in even more,” Castro said. “I know one day we will look back and know that was quite the experience.”

The 21-year-old Castro, of Fresno, California, was heavily sought after following a stellar amateur career in which he went 177-7 and was a two-time youth world champion and a 17-time national champion, having won tournaments such as the U.S. Nationals and Golden Gloves.

He said he decided to turn professional after he did not qualify for the U.S. Olympic trials for the 2020 Games that wound up being canceled anyway due to the coronavirus pandemic.

He said he made the decision to turn pro in late February 2020, just before the pandemic shut everything down. He signed with Connolly and Hearn and made the trip later that month with his father and trainer, Tony Castro, to Frisco, Texas, where Hearn was promoting Mikey Garcia-Jessie Vargas, to sign the contract and meet the media.

Then was the daunting task of actually getting into the ring for his pro debut, which was postponed four times.

He was first due to fight on the Regis Prograis-Maurice Hooker undercard on April 17, 2020, but that show was wiped away by the pandemic. Then he was supposed to fight last May 2 on the undercard of the Alvarez-Saunders fight that never wound up being announced because of the pandemic.

Castro’s next try was Aug. 15, when Hearn put on a card in Tulsa, Oklahoma, headlined by Jessica McCaskill winning the undisputed women’s welterweight title from Cecilia Braekhus. But Castro fell off at the last minute because of a positive COVID-19 test, even though he never became ill.

Try No. 4 was supposed to be on Nov. 27 on the Daniel Jacobs-Gabriel Rosado undercard, but that was scrubbed when Castro suffered a sprained ankle.

At long last, he made his pro debut on Dec. 19 by knocking out Luis Javier Valdes in the third round on the undercard of Alvarez’s rout of then-Ring super middleweight champion Callum Smith at the Alamodome in San Antonio. 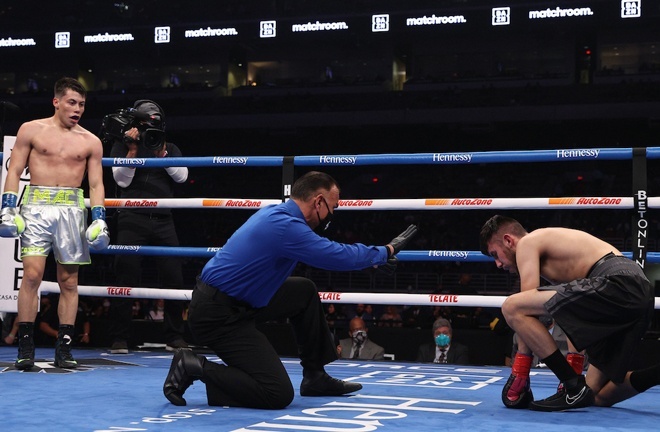 Castro’s second fight ended with a second-round knockout of John Moraga on Feb. 27 on the undercard of Alvarez’s title defense against Avni Yildirim at Hard Rock Stadium in Miami.

And now he is back for appearance No. 3, once again on the undercard of his favorite fighter.

“Eddie is a big believer in Marc and knows his amateur pedigree and we got lucky that Canelo fought so often over the past few months,” Connolly said.

He added, “It only makes sense because Marc Castro was one of the most decorated amateurs out there and he’s Mexican-American, so it makes sense to put him on these Canelo cards to expose him to Canelo’s fan base. I expect him to be one of the Mexican-American boxers to take over the mantle in the next few years. He’s got an exciting, crowd-pleasing style, comes forward, lands heavy shots. He doesn’t have the most conventional style out there, a little bit of an awkward style, but he makes up for it with pressure and heavy hands.”

As previously mentioned, Castro’s pro debut was slotted in as the co-feature for Alvarez-Smith and Castro admitted he was nervous walking out to fireworks before the limited capacity crowd of about 15,000, by far the biggest he had ever fought in front of.

“We thought he could handle it and he did,” Connolly said. “He calmed down after the first round and took out a guy who had never been knocked down or knocked out before.”

Castro said he was nervous but confident.

“I didn’t know what to expect. It’s kind of like you sink or you swim,” Castro said. “I know a lot of amateurs, kind of like (two-time Cuban Olympic gold medalist) Robeisy (Ramirez), who had great success in the amateurs and then lost his pro debut, and it wasn’t even a big stage. You never know how someone’s going to react when you put them under the bright lights until you put them there.

“The first one, I had never gotten that kind of adrenaline rush ever. It’s a feeling like you just have to ride it. I was excited in the first round and then I settled in. The first fight was kind of tough after all the setbacks (of trying to schedule it) and I never fought with eight-ounce gloves before, so that was different, and they threw me in the co-main event. I liked that. I feel like I was born for this, I was made for this.”

He said he felt much more relaxed for his second fight.

“The second time I already knew kind of what to expect and at the same time I knew I wanted to soak in the moment more and I did, and I knew when to step on the gas and when to calm down,” Castro said. “I feel like I’m getting better with that experience because the stages are only going to get bigger with the success in the ring.”

So far, Castro said he is adjusting well and learning the difference between amateur and pro boxing.

“I learned that it’s more about having defense, power and timing and learning how to mix it together. I’m learning this is a man’s sport,” he said. “You can’t mess around with this. You gotta take it seriously every time you’re in the ring because your life is on the line. Don’t think you made it because once you begin believing your own hype that’s when you start failing. So far, so good. I’m enjoying it. I’m enjoying training hard and learning.”

While Castro did not have much interaction with Alvarez other than to say hello during the fight weeks for his first two bouts, he took to heart and is motivated by what Alvarez said to him and his father when they attended a post-fight victory party following Ryan Garcia’s seventh-round knockout of Luke Campbell on Jan. 2 in Dallas.

“Canelo told me to keep putting in the effort, keep doing it. ‘I see you working. Stay disciplined, stay focused and you can make it real far,’” said Castro, recounting their conversation. “I was just like in awe. I was like, ‘Thank you. That is so appreciated.’ Canelo and Reynoso were praising my dad and telling him, ‘We’re here for anything if you need us. You have a great son and you guys are a great team.’

“It’s kind of like validation that we’re doing something right and the big people in the sport are noticing it.”

Canelo-Saunders, plus undercard action, will be broadcast by DAZN in the U.S. and the U.K.