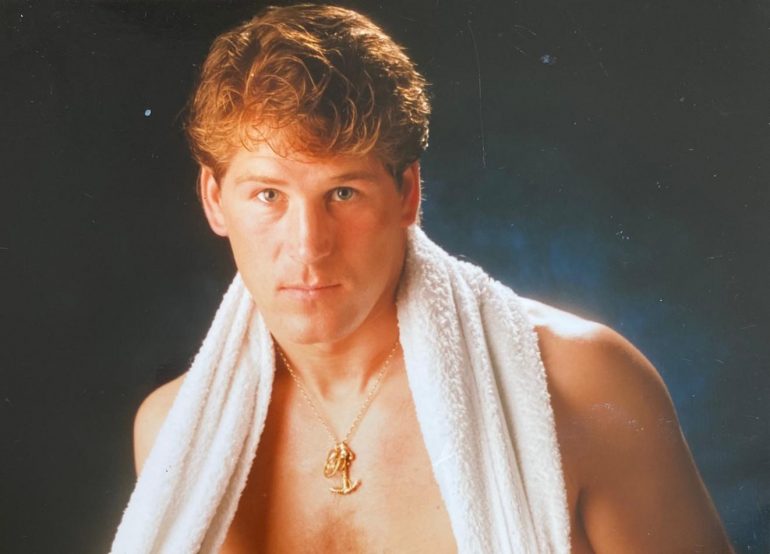 Photo courtesy of Henry Wharton
03
May
by Anson Wainwright

Britain’s Henry Wharton was a perennial contender in the super middleweight division in the 1990s. However, despite three world title bids he was unable to reach the top of the mountain.

“We come from a traveling family,” Wharton told The Ring. “We were a working family, we used to go to Wisbech in Cambridge, we used to go fruit picking. We knew nothing else other than work, really.”

His father saw something in his son and the youngster began boxing at 14 years old.

“When we joined [a boxing gym], it was almost like it was meant to be; me and the gym just went hand in hand,” Wharton said. “I didn’t spend long in the gym before I was in the ring competing.”

He excelled as an amateur, narrowly missing out on the 1988 Olympics and then he lost in the final of the ABA nationals.

“I went all over the world boxing for England, won medals for them in multi-nations,” said Wharton, who went 92-11 as an amateur. “The pre-Olympic tournament, I got a silver, [losing in the final to Sven Ottke]. My position looked like it was strong, [but], unfortunately, they didn’t take a middleweight due to cutbacks. Then I go and to get disqualified in the 1989 ABA finals which was too much to take.”

Wharton wasn’t short of suitors in the professional game and signed with renowned British promoter Mickey Duff. He made his professional debut with a first-round stoppage over Dean Murray in September 1989.

The tough Yorkshireman won his first 10 fights before stepping up and beating Rod Carr for the vacant Commonwealth super middleweight title in front of his hometown fans in a grueling 12-round encounter on June 27, 1991. That win came at a cost.

“I hit him and my hand went through his gumshield, through his teeth and through to my hand, I broke a bone in the right hand,” he recalled. “The blood was pouring out and nobody knew where it was coming from because I only had a little nick under my eye and he had a little cut. It was like an abattoir, there was blood all over the place.

“I remember sat in the corner and I was cold,” recalled Wharton. “I was in a position of exhaustion. I found myself thinking, ‘I can’t get back up off this stool.’ Every time I got back up, I thought, ‘I can’t do another round.’ I just kept going, I saw the winning line and dragged myself over.

“I’d had a broken hand earlier in my career. I didn’t want to go through all that time, having pins in place like I did before, knowing the effect it would have, side-tracking me for some time. I never went to the hospital; I went home and suffered the pain for a week, [using] hot and cold water. The metacarpal had broken, the knuckle had collapsed, it was broken in two places. My hand heeled in a funny position.”

Wharton went on with his career, but the injury blunted his attack. Eventually he spoke with Duff, who quickly sent him to see a specialist. The hand was re-broken, he had physio and returned to action with three comeback fights in 1993. 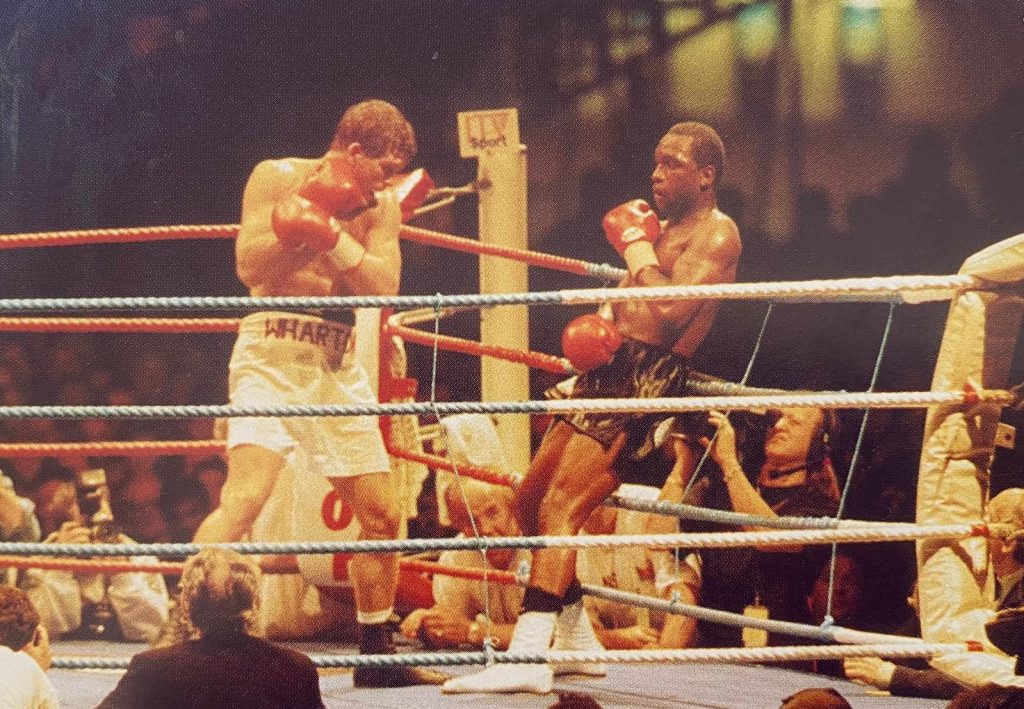 Wharton would then challenge WBC 168-pound titleholder Nigel Benn at Earl’s Court in London on February 26, 1994.

“It was a fantastic occasion,” he said. “I had a high guard, copying Michael Watson when he [beat] Nigel Benn, which wasn’t my style. I went along with it. Nigel Benn was one of the most feared punchers in the world, we had to pay that respect, so I kept my hands high, but I was unable to [be] exactly what I was. I played a little bit to the plan, but I should have done what I do best and that’s attack. Perhaps I got caught in between styles.”

Although he craved a rematch with Benn, it was the Brit’s arch nemesis who Wharton would fight later in the year.

“[I was] ready to go for Eubank,” said Wharton, who dropped a spirited 12-round unanimous decision. “[But] styles make fights and stylistically that wasn’t right for me, Eubank’s a counterpuncher.

“Coming off the Benn fight, knowing I didn’t give everything I normally do; I may have tried too hard and played into Eubank’s hands. He counterpunched me, that’s his strength, and I played to his strength. I want 11 out of 10 for trying. We’re not taking away that Chris Eubank is a fantastic fighter.” 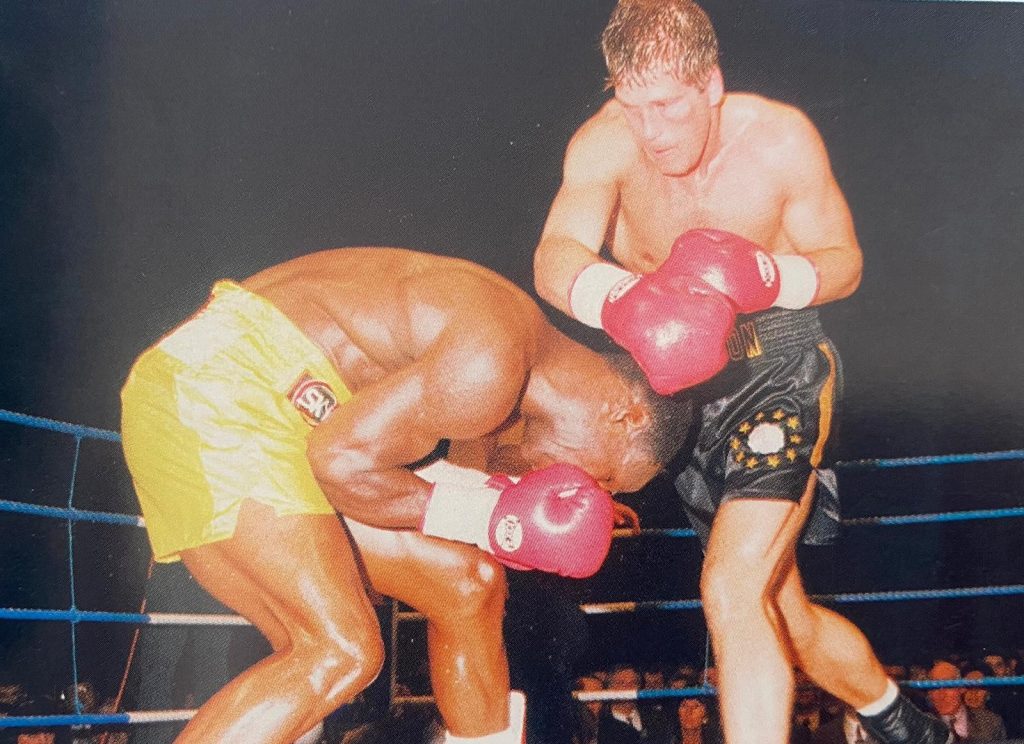 Try, try again. Wharton mixed it up with another British great, Chris Eubank, 10 months after the Benn affair. Photo courtesy of Henry Wharton

“On the strength of me beating Nardiello, I was the [WBC] No. 1 to box [then-titleholder] Sugar Boy Malinga, and Nardiello gets a chance,” lamented Wharton. “When [Nardiello] beats [Malinga], I thought, ‘I beat Nardiello on my worst night, can I fight him again?’ But he fought Robin Reid.”

Following a game of pass the parcel with the WBC belt, Wharton, who suffered terribly to make 168 pounds, boiled himself down once again to face new titleholder Reid in Manchester on May 3, 1997.

“There was nothing in the fight after seven or eight rounds,” said Wharton, who dropped a 12-round majority decision. “I was always well-conditioned and found myself in a position I’d never been in my life: I was tired after seven rounds.”

“I always look at it as, ‘A world championships eluded me, but I may never have got to those big occasions or anywhere near if I hadn’t tried as much as I did,’” said the proud Yorkshireman.

Since retiring, Wharton has kept busy. He did some roofing, bought a fish shop and invested in property, but boxing has a way of pulling you back. He opened ‘Henry’s Gym’ in his hometown and currently works with young pros Mitchell Barton and George Davey.

The three-time world title challenger graciously took time to speak to The Ring about the best he fought in 10 key categories.

BEST JAB
Chris Eubank: He fired two jabs; he’d double it up, he almost chucked his first one away and landed the second shot, [it] would come six-to-eight inches longer and obviously that was with his body moving forward. I found his jab really difficult to get past. He seemed like he was very accurate with his left jab that night.

BEST DEFENSE
Nigel Benn: He dipped really low, he was allowed to get away with going really, really low. The reason I say this is because I was disqualified three times as an amateur for doing something very similar. As an amateur your head in not supposed to go below the beltline. I found it really difficult to catch Benn clean, or to catch him at all. I was hesitant to attack when he was on the ropes because missing punches [meant that he was] coming back with shots.

BEST HANDSPEED
Robin Reid: His hands were fast. A few times I thought I was out the way [and he hit me]. Maybe I was coming to the end of my career. I could see punches coming but couldn’t get out the way of them. I always thought he was a sharp fighter.

BEST FOOTWORK
Sam Storey: His ring awareness is fantastic. I watched him long before I boxed him and always admired his style. I did a lot of homework for him and brought the right sparring partners in. He came with experience and his movement was fantastic.

SMARTEST
Mauro Galvano: I was debating between Mauro Galvano and Giovanni Nardiello. Two smart fighters, very smart, ex-Olympians. [Galvano] was a big, tall guy, he caught me coming in a few times which wasn’t the norm. He was bringing me in and setting it all up. I got to him in the end.

STRONGEST
Rod Carr: Rod Carr was without a doubt the strongest man I ever fought. Just strong and determined. Even when I tried to hold him to take a breath, he’d force your hands away.

BEST CHIN
Eubank: That fight’s [back and forth], nobody knows who’s going to win. I hurt him a few times. I hit him and I know I had less effect with him than I would have with all the others. He was just like a rock.

BEST PUNCHER
Benn: I was never hurt by him, but he hit me with one right hand and I always vividly remember I’d never felt anyone’s power quite like that. The gumshield came out of my mouth and he forced me to move.

BEST BOXING SKILLS
Eubank: The showmanship took over a little bit, but I do think his boxing skill was brilliant. I think he was a phenomenal athlete. When he really wanted to [perform] and had to, I think he was one of the best.

BEST OVERALL
Eubank: The night I fought him, I gave everything. I took a lot of punishment due to the eye. He still hit me and I hit him. I pushed him to him to the extreme. I came away from this fight and I don’t think I was the same fighter… I don’t think he was either. It was brutal from both of us, we both went somewhere that night.